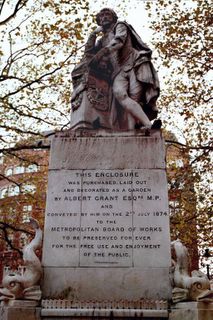 Posted by DramaJim at 8:19 PM No comments:

WHEN IN DOUBT THERE’S ALWAYS SHAKESPEARE

Now that Shakespeare’s birthday (April 23rd) is over for another year, you definitely need some light theatrical reading with a Shakespearean slant to pass your time until next year’s celebration. From my collection of fiction using theatrical backgrounds, here are a few summer chillers or thrillers that rely on the Bard for their background.

If mysteries are your meat, try Simon Hawke’s A Mystery of Errors or The Slaying of the Shrew, Both are Tor Books out of New York and were published in 2000 and 2001 respectively.

In the first volume, Will Shakespeare and a fictional friend, Symington “Tuck” Smythe, are erstwhile detectives who run into murder most fowl around Burbage’s “The Theatre”. There’s a fair amount of humor and a typically complicated plot with mistaken identities around every corner. Even with a bit of uneven historical detail, it’s still good fun.

The second novel sees Will and “Tuck’s” theatre company garnering an engagement to perform at a wedding in a country house to help tide them over a plague induced closing of their London playhouse. They quickly discover that things are as rotten there as in Denmark. The bride ends up dead on the boat that has carried her up the Thames to the ceremony and our actor/sleuths have their hands full with overheard conspiracies, deadly murders, and unrequited loves. Once again it’s a quick and pleasant read with the historic theatre ambiance giving the whole affair an added touch of sugar for the theatre buff.

This volume takes a saucy and gritty look at the Bard from the viewpoint of his wife, Anne Hathaway. You may or may not be impressed by the answer provided to one of the oldest Shakspearian puzzles--the mystery of why Anne got the second best bed in Will’s will. Nye has also written a novel titled The Late Mr. Shakespeare, which spins a tale of the life of Shakespeare as told by a former colleague and actor by the name of Robert Reynolds, alias “Pickelherring.”


A different slant is provided by Tiffany Grace’s My Father Had a Daughter. New York: Berkley Books, 2003.

Instead of seeing the Bard reflected through the eye of long suffering wife Anne Hathaway, this novel follows the family saga through the eyes of equally long suffering daughter Judith Shakespeare. Tiffany writes with grace and empathy while painting a glowing--though perhaps overly romanticized image-- of 16th century Stratford and London. The fictional jump off point is a Judith Shakespeare tormented by the fear that her flirtation with witchcraft has resulted in the drowning of her twin brother Hamnet. Judith becomes a sensitive loner who exists on scraps of "fowl papers" left about the house by her father when he visits. This leads her into a wild excursion to London, where she manages rather too easily to secure a position as a boy actor in her own father's company. Even if that seems a bit too much like the film "Shakespeare in Love," do not let it keep you from putting it on your bedside table.

If your local library or book emporium lacks these titles, Half.com or Amazon should be able to come to your rescue. 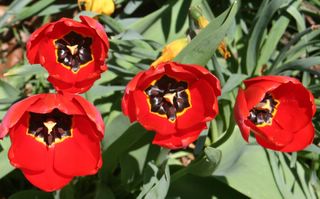 Finally they too open to receive the warmth of the sun.

Posted by DramaJim at 9:39 AM No comments: 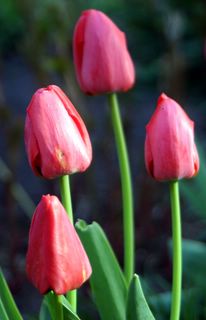 Then the tulips pose just on the verge.

Posted by DramaJim at 9:38 AM No comments: 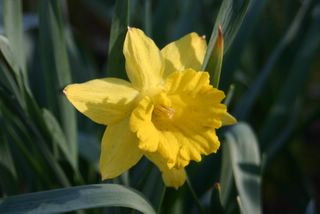 Posted by DramaJim at 9:37 AM No comments:

Interesting article in the new issue of THEATRE TOPICS by Leon Ingulstrud called "Why Devise? Twelve Thoughts on Devising with Undergraduates." The premises to be pursued tend to get a tad foggy as they try to make distinctions where none may exist like declaring that art is distinct from entertainment because art tends to question assumptions and the status quo while entertainment confirms assumptions and the status quo. Whoa! You say. Well so does Mr. Ingulstrud who immediately after declaring this adds "Despite this distinction, entertainment can contain artistic attributes and art can be entertaining." Not sure where this leaves us other than up a tree. I would personally prefer to define the word "entertain" as "holding the attention agreeably." This implies that art ought to hold our attention by many means including pleasant affirmation of the values of the status quo and prickly challenges to it. If we do not agree to pay attention, we will never experience art or entertainment.

His assumptions to be dispelled are more direct and more agreeable to me. Stop thinking that the director knows the answers is a good one. As is stop thinking that theatre is easy. Like him I have often wondered why the difficulty and cultural value of music and other performing arts is recognized and why a theatre event (even if professional) is seen as a slightly more polished version of a junior class play. Why isn't the great pianist seen as just a guy who hit a few more of the notes than the kid in his first recital in front of grandma? He goes on to remind us that there is no way that theatre is supposed to be and that silly or stupid ideas need to be heard. My opening remarks to classes for years contained the statement that "The only truly stupid question was the one that wasn't asked." Somewhere else in the journal another author explored the same question by declaring that people working in group or collaborative situations need to refrain from using the word "No" for at least five minutes after the introduction of even the craziest of ideas. Sounds like good advice.

Another fine idea from the article is an idea attributed to Beverly Sills.
"There are no shortcuts to anywhere worth going."

And happy spring!
Posted by DramaJim at 8:56 AM 7 comments: