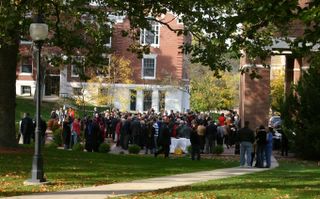 The Reception on the Wells Theatre Plaza 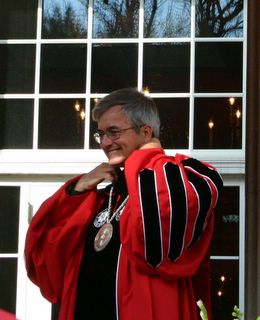 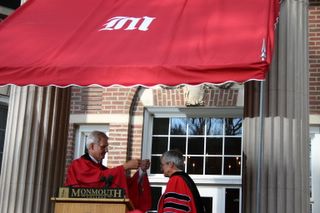 The Medallion of office is conferred 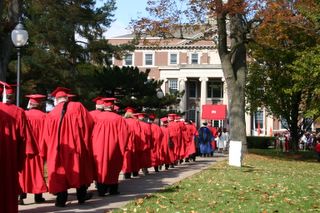 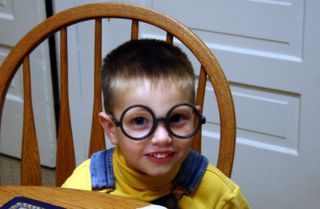 Email ThisBlogThis!Share to TwitterShare to FacebookShare to Pinterest
On a splendid crisp fall day Monmouth College inaugurated its new president Maurie Ditzler. The campus looked gorgeous as the photos demonstrate. The day was made even grander by the arrival of the grandkids. Mikel the clown stole the show as a Harry Potter lookalike.
Posted by DramaJim at 9:01 AM No comments:

Will Dissed Again: Shakespeare on Trial

Neville’s the man., according to a new book by Brenda James and William Rubenstein. Once again the breech is too wide for Will, who could not have had enough knowledge to write the plays. And once again he is just the front man for another noble courtier who had the knowledge and the time to complete the task. Sir John Neville lived at about the same time and was apparently a distant relative of Shakespeare. Of course he left a coded hint, this time on the dedicatory page of the sonnets, that leads you to his name as the true author. For more visit, http://www.gurunet.com/NewsClick?url=http://news.yahoo.com/s/ap/20051018/ap_en_ot/shakespeare_debate

For me it's back to the golf course.

Posted by DramaJim at 9:50 AM No comments: 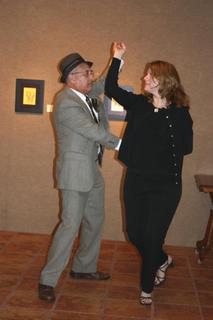 The British playwright Harold Pinter received the Nobel Prize for Literature last week, becoming I believe only the third playwright to be so honored (George Bernard Shaw, and Eugene O'Neill are the only others to come to mind.) Please advise if I am in error. Pinter has long been a favorite of mine having directed The Birthday Party and The Hothouse and having seen, read, and taught a fair amount of his work over the years. Though some have carped that his selection was "political" for his high profile negative views on the US involvement in Iraq, I would prefer to believe that the honor is more than deserved after a continuously profound and inventive creative life of almost fifty years. Go Harold!


Britain news: MI5, whose very existence was denied up to a few years ago, has opened an official web site and the new James Bond actor was announced by a phalanx of Royal Marine assault boats speeding up the Thames. Media, entertainment, and government all one and the same nowadays.

The statue of a handicapped nude pregnant woman sits for the next 18 months on the once empty fourth plinth in Trafalgar Square. Comments have covered the gamut from fervid praise to outrage, which leads me to believe that it is a successful work of art.

Monmouth's Gibson Woods golf course is starting to show off its fall splendor. Using the new senior tees has granted me two to three strokes per nine. Initially it made me feel like a bit of a cheater after years of trying to keep up from the big boys tees, but a new infusion of self esteem quickly erased any pangs of guilt. Go Jim! 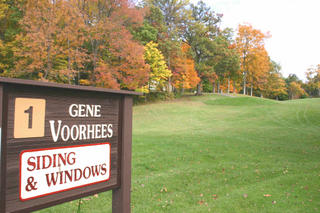 Attended a pleasant production of Oscar Wilde's "The Importance of Being Earnest" at the Monmouth College Theatre Saturday night. The director was a student and acquitted herself admirably. The pace was bright, most of the lines were spoken crisply, and traffic management was efficient. The young players kept things moving, but Lady Bracknell was a great ball of fire from the word go. Costumes still uneven--especially for the men--and some prop gaffes that should have been caught like white sherry and tea, and bread and butter sandwiches that were slabs of Wonder rather than dainty squares.

Quad City symphony on Sunday afternoon. Dynamic young Schumann player and then Saint Saens great Organ Symphony. This is a work that just can't be caught on a CD. In a nice hall with a good orchestra and a full power pipe organ, you can feel your fillings vibrate. Moving stuff.

Finished off Alexander McCall-Smith's Friends, Lovers, Chocolate on Sunday evening after a pleasant return to P.D. James' The Murder Room on "Mystery" on public TV. No desperate housewives for us.

This is McCall-Smith's second book about the muted cerebral adventures of Isabel Dalhousie--a well heeled resident of Edinburgh and the editor of the Review of Applied Ethics. The author flirts effortlessly through Scottish weather, city geography, gourmet food, philosophical bon mots like St. Augustine's classic statement on chastity "not just yet", medical musings (the slim plot involves a heart transplant patient and the possibility of cellular memory), and various other dips into the life of the mind and the life of the emotions. Ms. Dalhousie has to juggle her relatives, her friends, her potential emotional entanglements, and her philosophical journal while dealing with her often unfortunate desires to help others. She discovers just as Mma Ramotswe did in the African series that a lot of folks who ask for advice, don't actually want it at all. But when all is said and done our coupon cutting philosophical tyro doesn't cut it. No one in the book including the main character excites you and moneyed Georgian Edinburgh just doesn't seem to have the warmth and love generated on all sides by Mme. Ramotswe and her African cohorts.
Posted by DramaJim at 9:03 AM No comments:

"To what purpose then require the co-operation of the Senate? I answer, that the necessity of their concurrence would have a powerful, though, in general, a silent operation. It would be an excellent check upon a spirit of favoritism in the President, and would tend greatly to prevent the appointment of unfit characters from State prejudice, from family connection, from personal attachment... [The President] would be both ashamed and afraid to bring forward, for the most distinguished or lucrative stations, candidates who had no other merit than that of coming from the same State to which he particularly belonged, or of being in some way or other personally allied to him, or of possessing the necessary insignificance and pliancy to render them the obsequious instruments of his pleasure."

Alexander Hamilton in the Federalist Papers.

It's a good thing that thanks to Jerry Springer and his ilk that "shame" has gone out of fashion.
Posted by DramaJim at 9:13 AM No comments:


Michael Frayn is the excitement because he keeps on turning out work of high intellectual and dramatic quality. The Time Line theatre in Chicago reminded me again that Copenhagen was a play that grips your mind and your heart. The question of what actually was said at the fateful 1941 meeting between the German Werner Heisenberg and the Dane Niels Bohr in the city of Copenhagen is simply the vehicle which allows Frayn to present us with musings on the nature of moral choice, scientific progress, the inconstancy of memory, and the impact of human interaction and friendship on all of the above.

As the play shifts from a purgatorial dead zone to various replays of the past you are swept into the complexities of atomic physics as well as the human soul. This is not an easy trip. You can’t expect to leave the theatre humming a Danny Kaye title tune, but it is a worthwhile trip just the same. It's a show I would love to direct.

Though there is plenty of sorrow in Copenhagen, the real sorrow must be reserved to commemorate the passing of one of the latter part of the twentieth century’s greatest playwrights--August Wilson. I’ve read most of his work, seen several, and taught both Ma Rainey’s Black Bottom and Fences. Wilson was a giant and his great cycle of ten plays telling the story of African Americans in the USA in the twentieth century will stand tall in the sturdiest competition. His scope is as sweeping as O’Neill’s, while his command of the poetry of the theatre surpasses O’Neill’s often labored prose.

Though some found irony in Wilson’s cry for more black actors, and black companies, doing black plays while directing his own work toward the regional rep stalwarts and Broadway, few can doubt the humanity of his overall philosophy. Honor your ancestors and try to do the right thing is a credo that has no racial, religious, or ethnic overtones. It’s just a good thing for any human being to strive for.
Posted by DramaJim at 5:27 PM No comments: