Had the opportunity to take a short trip into Chicago earlier this week to visit with some good friends  (The Herolds's) who were on their way to a new job and home in Ohio from Hawaii.  You shall have to ask them why anyone would exchange Hawaii for Ohio.  :) 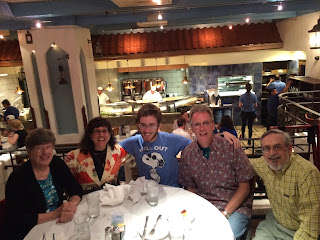 We had some good views at the Art Institute's just opening Gauguin  Exhibit.  It is fascinating and we hope to make another visit in a couple of weeks.  Beautifully arranged.

We had some good eats at Miller's Pub  (an Italian Omelet), the Greek Islands (Braised Lamb Shank), and the Art Institute Cafe (Lime Shrimp Taco's)

Tuesday morning found us aboard Chicago's First Lady for a top notch architecture tour guided by a docent from the Chicago Architecture Foundation.  We had not taken this cruise for a number of years and wow has the riverscape changed.  Lot's of new buildings, the expanded Riverwalk itself, and a pristine day made for a marvelous sailing.  Nothing still quite as impressive as the Chicago Skyline as viewed from the mouth of the river. 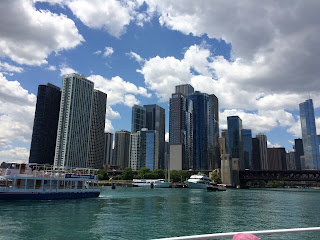 Hate to say it but the Trump Tower is an eyeful no matter your political leanings. 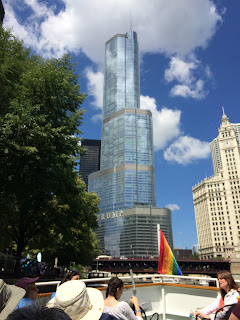 As is the European Renaissance inspired Wrigley Building. 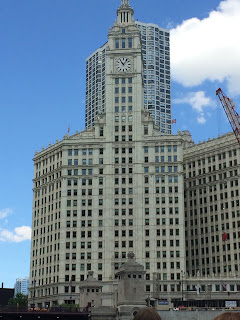 Yet for just plain look at me originality the 1967 Marina City twin towers still get my vote for  a striking form that has lasted over the years. 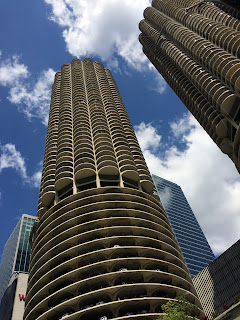 No doubt the older structures emanate  solidity and comfort,  but the new mirror clad behemoths  are just plain dazzling as they blend into and reflect the cloud puffy sky. 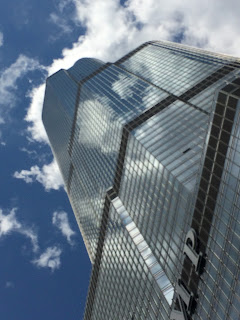 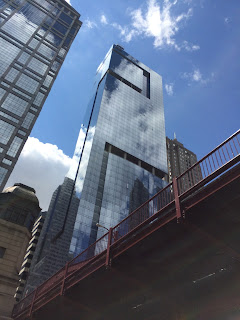 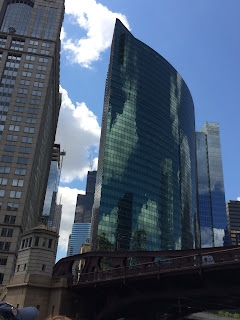 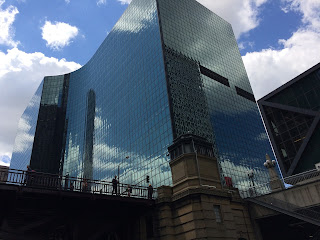 Flanked by some compatriots the Sears (or Willis) Tower still gets the prize for tallest of them all. 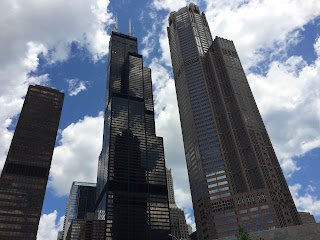 To get more information on The Chicago Architecture Foundation's walks and cruises go to
http://architectural.org
Posted by DramaJim at 1:01 PM No comments:

Nothing like a little of America's pastime to ratchet up our summer excitement.  We traveled to see to our grandson play in a few games last weekend and I brought my camera along.

He plays a bit of first base. 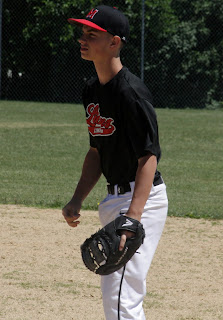 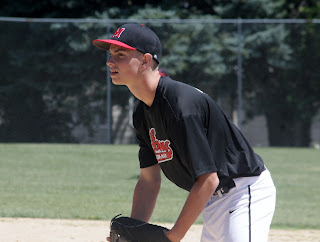 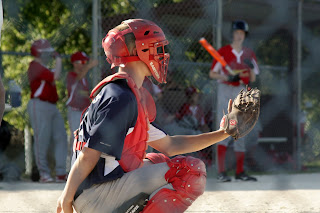 Then to top it off he pitched two innings. 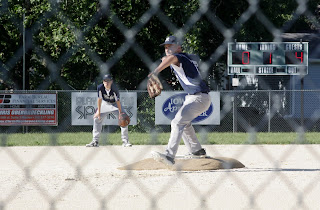 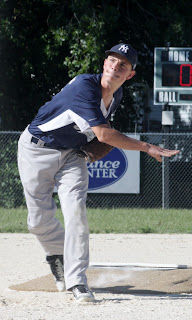 He did walk a couple, but only gave up one run so we counted it as a success.

It was also a pretty good day in the batter's box. 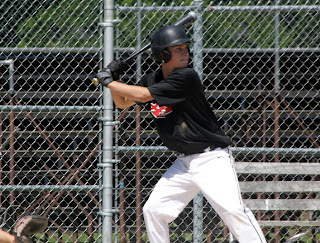 Here he is legging out a double. 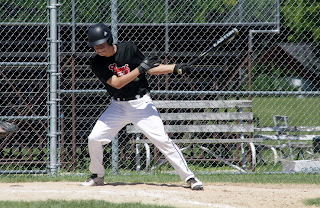 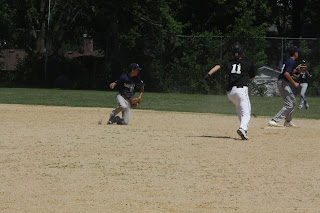 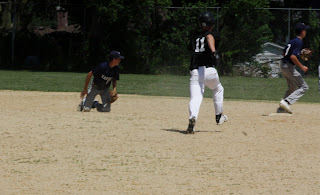 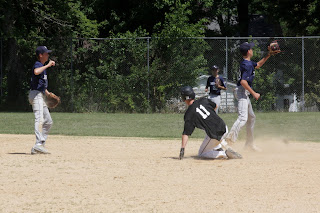 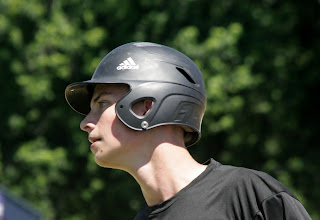 Posted by DramaJim at 7:51 PM No comments: 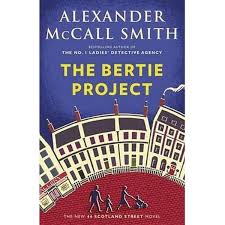 When the events of the world seem to be spiraling into a sewer, there is no greater calming factor than a quick read novel by Andrew McCall Smith. In his 2016 The Bertie Project, he offers a lovely trip into and through the beguiling lives of the folks around 44 Scotland Street in Edinburgh, Scotland.

Bertie's mother has returned from her stay in a Middle Eastern harem to reassert her iron-fisted control of Bertie and his father Stuart. Bertie is handling the return to language lessons, yoga, and analysis with equanimity but Stuart has begun an extra-marital fling as a tiny little sign of independence. Meanwhile handsome Bruce is getting a makeover from his new found Australian Amazonian squeeze. Big Lou, the local coffee house proprietor, finds that the MD she has met seems to want her to wear a matron’s uniform  to more than a costume party. And then to top it all off Angus, the artist and part-time poet gets defenestrated in his own home.

Domenica, his wife, handles the philosophical twist on all of these events while the absurdity of the situations puts lip gloss on the faces of all. Serious as it may be, we can’t but help laughing at the predicament of Angus sailing out of a window and landing upside down in a tree for instance. In another comical situation, we have Bruce and Aussie superwoman Clare in a tiny clothing store changing room trying to stuff Bruce into too-tight “hipster” jeans. Meanwhile Bertie moves calmly through the storm without telling a single fib and proving once again that naïveté is charming when coming from total innocence and a generous heart.

Of course it’s old hat for McCall-Smith, but it’s more like a a nice old Harris Tweed cap than a silk topper. The ending once again ties all up and leads to a poem by Angus at one of Domenica's dinner parties. It continues to reinforce that love in the small moments with your friends may be all there is to keep you sane amidst the swirl of hatred and gratuitous violence of the world at large.

Read it if you need a bit of a lift from depression.

Some Additional Nuggets
p.106  We need people to wear their uniforms of identity  from policemen to head waiters. It helps preserve order and confidence in the pillars of civilization.

p 134  We need rituals that make us members of something.  Once again they affirm the order of the universe. "Acts make you pause for thought. . ." but ritualistic performance moves beyond you as an individual and into the corporate. There is no immediate purpose to it other than binding you to others doing it and to the species as a whole.


p 197  The problem with doing the right thing is that it spoils all the fun.

p. 240  The Winston Churchill martini.  "Pour in gin and bow in the direction of France."

“Innocence glimpsed in others reminds us
Of the time when our own consciences were clear.”

When we lose we think we lose forever, but that is not true.  Think of love at those times because it always returns to say that I was always there but you just didn’t hear me at the moment.
Posted by DramaJim at 3:05 PM No comments:

The beasts are abroad and they kill and maim with no regard. The London Bridge/Southwark terrorist strike on London has come far too close to my heart—even for  a guy who was shepherding  students around the city years ago during ‘the troubles.”  My heart goes out to the victims whether they be British citizens, expats, immigrants, or tourists because this is a signature route that I have taken at least a hundred times over the past fifty years. It is to a theatre person about as sacred a walk as any in the artistic universe. 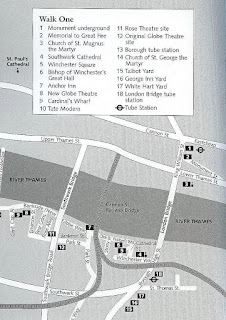 Crossing  London Bridge is a  part of the first chapter in my London Theatre Walks book,  You are asked to pause in the middle of the (latest) London Bridge and imagine the medieval bridge and its view upstream toward old St. Pauls and downstream toward the Tower. You are asked to  see the men of Will Shakespeare’s company carting the timbers of their old Theatre across the river and using them to assemble a new theatre on Bankside, which is now remembered as The Globe.
The walk then takes you into Southwark and past the Borough Market and into Southwark Cathedral, where you might now feel obligated to leave a prayer. 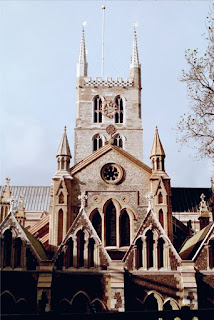 You will learn that Shakespeare paid there for a funeral bell tolling for his dead brother and you will also find there a handsome memorial to Shakespeare.  You will leave the church and walk along the shore for more views that the Bard would still remember. 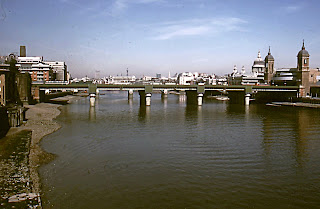 And finally you would come upon the re-constructed Globe itself. 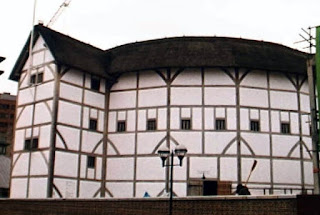 We mourn the lives taken here by a slaughter in the name of holiness and we mourn all destruction of human life and culture wherever it might occur.  William Shakespeare walked this path and the killers have befouled his  memory.

“Courage and comfort,
All shall yet go well”


King John
Posted by DramaJim at 1:06 PM No comments:

Objects in the Mirror at the Goodman Theatre

I have been critical of some of the Goodman Theatre’s recent offerings because of what I have deemed   “over-producing.”    They have seemed to want to make a visual splash just because they have a big stage and can afford fill it with lavish set pieces and rock and roll lighting.
It is with pleasure that I can report that the current Goodman production of Objects in the Mirror by Charles Smith (Not Chuck Smith, who is the director) allays my fears.  Objects is a small show (only five cast members) that uses magnificent but simple visuals to support and deepen its multiple meanings.
The plot is as old as the Bible and as current as today’s headlines. A young Liberian refugee flees horrific violence and corruption, finds himself much safer physically in Australia,  but still tormented as to his real home and his human identity.  And therein lies the nub.  The objects in the rear view mirror always remain “closer than you think.”   Your former life cannot be erased by re-painting the foyer multiple times.  ZaZa nee Shedric can still see the original  color even if his helpful Aussie lawyer can’t.
The play pulsates with this conflict.  The African finds a peaceful scenic vista of sky, shore, and sand  in his new home, but also finds residual colonial racism.   The set design is spot on.  Two modern spare scenes glide in on wagons. A roof line descends from above.  Behind them are two huge sliding panels that are used for projections. When narrowed they serve as a central entrance; when opened fully they expose a giant drop of shore and sea fronted by a narrow pit of real sand.     The views whether interior or exterior expose brilliantly the small lonely soul adrift in sea of modern sterility or a cosmos that offers vast hope but no real answers.   Immigrants opines Smith, will always remain immigrants.  They cannot lose their previous lives or paper over the violence of the journey.  Integration, as the white western world like to think it might be, is not simple and may indeed not even be possible.  The objects in the mirror don’t go away and are always closer to the surface than they seem.  The motives of all the characters are shifting as their stories shift and we cannot ever know which of their stories is true.  In the final image the sliding panels open to full width as the roof rises leaving Shedric full back and alone on the shore with arms raised to the sea.  Will Shedric stay in Australia or flee to another new place with his uncle?  As the curtain falls we don’t know.  What we do know is that this young man will never be able to snuff out his past; it is a part of him for the rest of his days.
The cast is superlative and so beautifully balanced that to separate out any one of them would be unfair.