Berlin and the Wall Summer of 1963

With news of the 25th Anniversary of the dismantling of the Berlin Wall going the rounds, it might also be instructive to share some photos of Berlin in 1963 shortly after the wall was constructed.  It was our first trip to Europe and just getting to the city was a trial and a half.  We took a train through the eastern sector and the machine gun armed and generally surly passport controllers quickly sent the message that we were none too welcome.

The photos have deteriorated over the years, but they do show you how the wall did look some fifty years ago. 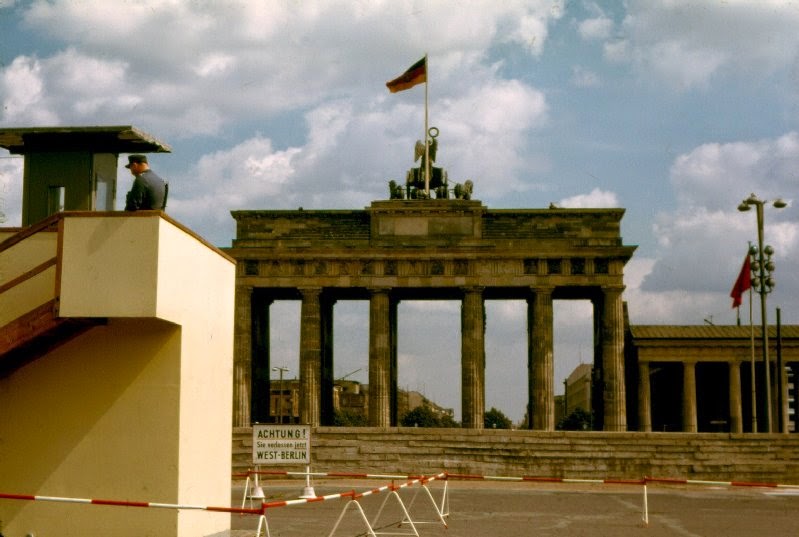 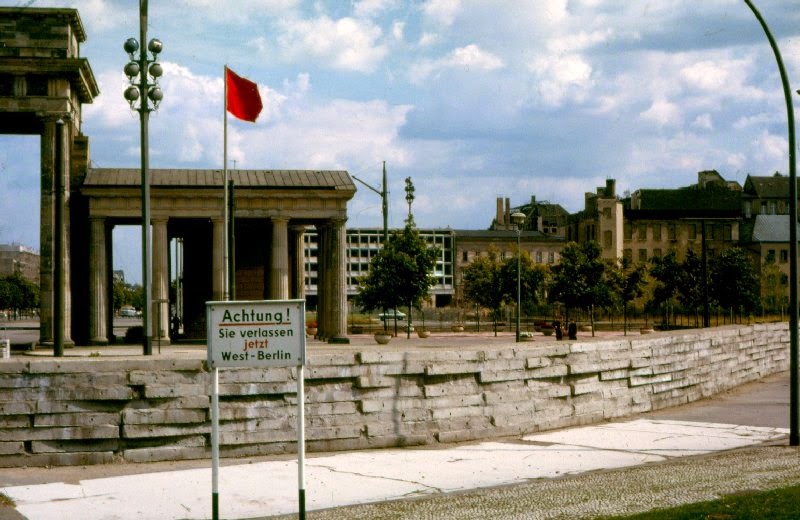 Posted by DramaJim at 8:47 AM No comments:


Smokefall by Noah Haidle at Goodman Theatre Production October, 2014 was a visual, emotional, and intellectual treat. The scenery was evocative, the sound design rumbled, and when the house and the family’s world came apart at the end of Act I, it made for a splendidly theatrical unity of  thematic statement and staging expertise.   Couple this with a universally excellent acting company and you have a show that hit on all cylinders for me.

Certainly the  Colonel/Tommy,  played to the hilt by the remarkable Mike Nussbaum, walks away with the most kudos, but this was a strong cast all the way through.   I do have doubts on whether it was necessary to burden the play with the blatantly derivative  “Our Townish” footnotes.   I suspect the narrative could have been conveyed and the necessary points made without a “stage manager” to hammer them home.

I did want to know a bit more about the play, but it has not been published yet.  In lieu of that I  did do some additional research.
The title appears to come from a passage in Four Quartets 1: "Burnt Norton" (1935) [1] by T.S. Eliot. “The moment in the draughty church at smokefall.” A bit more of the poem shows Eliot zeroing in on time and the defining natural  moments of remembrance, which almost always floats just out of reach in the gauzy past. Seldom do we manage to perceive clarifying memories at the moment they happen.   In that sense Smokefall depicts the efforts to search for them and describes the search as occurring over and over in succeeding generations.   I still remember my mother admonishing me with “We get too soon oldt and too late smart.”

“Time past and time future

Allow but a little

To be conscious is not

to be in time

But only in time

can the moment in the

The moment in the arbour

where the rain beat.

The moment in the

with past and future.

This gauzy time warp of memory and regret and frustration is enhanced by the doubling characters and their generational jumps.  Although the time frame appears to be kind of pre-9-11 middle class late twentieth century, Haidle has excised most references to specific historical events.  The Colonel and wife have traveled the world in the military,  but no particular war is mentioned. No racial events, electoral decisions, or religious controversies  rear up to tip the emotional playing field into an Arthur Miller  type socio/moral dilemma.  The deserter father (Daniel)  works,  but no specific profession is mentioned.  Beauty, Daniel and Violet’s daughter,  have  been schooled, but I do not remember if we were told where. Two generations of stay-at-home wives are present, but women’s issues are not directly raised.  For me the play seemed like a meditation on Shakespeare’s Seven Ages of Man.  Time passes and we ache to establish some kind of  connection between what happened then,  what we wanted it to be,  and what it is now.  Chasing those connections takes a lifetime until senility turns you back once again into a dependent child. “sans everything. ”

The visualization of this feeling  begins with the stage design itself.  No curtain was used and we were offered plenty of time to take in a large apple tree hovering over the stage. Just below the tree was a canted slice of house featuring wide siding and a lighted window.  Below that,  two levels,  a 2nd floor bathroom and sitting room,  an exit leading up that may lead to that lighted window, which seems to be Beauty’s room.  Stairs on the right then led down to the main floor  containing a middle class kitchen on the left, a semblance of living area in center, and the front door of the house on the right.   The main impression is of a  zig zag,  off kilter world done in predominantly muted colors.
The stage design is echoed by the front cover of the program that was pictured at the start of this entry. In that illustration a man and woman  are touching hands silhouetted against  a golden sunset.   They are next to a house with a lit window overshadowed by a spreading apple tree. Even before the first line is uttered we are thinking tree of life, original sin, etc. The tree’s roots spread out below into a shadowy, foggy environment with moon that leads you back to the title of the play and the T.S. Eliot passage.

What did I get out of the play?  Violet,  sad and winsome and outside of it all, is played with a sad intensity by Katherine Keberlein.  Her daughter, Beauty, has stopped speaking and is now eating dirt and paint as she tries to somehow compensate for her feelings of helplessness at not being able to influence the deteriorating relationship of her parents.  Beauty’s father, Daniel,  disappears by running off at the end of  Act I like the father in Glass Menagerie,  who was a lineman who fell in love with long distance.   The apple tree takes over. Was this the original sin and betrayal of Adam? Beauty spends a life searching without aging for that lost father. When she does find him he is senile and in a nursing home.  She carries his ashes back to the old family home where her brother is still living.  She spills part of them on the floor and makes the double helix DNA sign in them before they are carried out to the yard for burial.   You can seemingly go home again, but the unchangeable DNA in your bones seems to doom the generations to repeat and repeat their searching for answers out there when the answers have always been in there.

In a spooky remembrance for me, we planted an apple tree in our yard when we moved into our new house in Milwaukee.  I was about eight.  That tree grew up and literally took over the area between the house and the garage.  It shaded and nourished us for many years. And it was gone when we drove by some years ago.   Even the apple trees die.
Posted by DramaJim at 8:44 AM No comments: