Where Were You Fifty Years Ago on That Fateful Day? 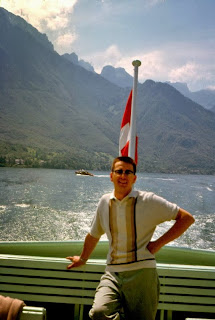 In the summer of 1963 my wife took this picture of me on a ferryboat in Switzerland. We were having the time of our lives and in the middle of a long traverse of Europe with two suitcases, rail  passes, a camera, and a tattered copy of "Europe on Five Dollars a Day."  We were as young and carefree as we were ever going to be.

One month later I took up a position as a speech and theatre instructor at Monmouth College in Illinois.  On Nov. 22nd 1963  I was driving a carload of Monmouth students down Highway 150 (No Interstate 74 in those days). It was a noisy and excited group as we headed for Peoria to compete in the Bradley University Speech Tournament. We stopped for gas at a tiny Standard Oil station in Brimfield, Il. To pay you had to go into the station and inside a radio was on and the voice sounded serious.  As the attendant was finishing my transaction, he said, "Didn't you hear? The President's been shot."   I can still see him standing behind that counter today. I can still hear his voice.

I returned to the car, slid back into the driver's seat, and said "I think we need to turn on the radio. President Kennedy may have been shot."   By the time we got to the Bradley Student Union there was no doubt. When we entered the building there was just an eerie deadly silence. The main lounge was packed with students and their teachers all sitting in stunned silence around the grainy image of a black and white television.  For the next day and a half we went about our competitions but always  returned catatonically to that lounge and that TV set to watch the sad story of  JFK's assassination unfold. To this day it was the most somber event I have ever been a part of.

Did it influence us?  Yes!  Camelot was a presence for us that is hard to communicate today even to young and idealistic Obamamites.  We had cast one of our first presidential ballots for Kennedy and he was going to take us to the moon and beyond.  It's not just an accident that the middle name of our son,  who was born in June of 1964,  is John.
We have probably made that Peoria trip hundreds of times in the past fifty years. My wife grew up there and her parents lived there then.  Ironically, just today my wife and I happened to make that same drive again to stock up on groceries at Sam's Club.  Brimfield is just a quick passing shadow on a bypass now, but every time we have cruised past since 1963 the memory of that little Standard Oil station and the students in our car surges back.

That's where I was when our president was killed.   That "one brief shining moment" was gone.

Posted by DramaJim at 9:29 PM No comments: