I have been getting pressure to post another entry here.  My many regular readers, which actually number about two,  seem to get uneasy if I go silent for too long.  What can I say other than the days have been full.  The time to finish up the Cancun trip seems to evaporate faster than the contents of my checkbook.

If you need some more excuses,  consider the following.  With spring hitting the midwest about a month early I had to clean my golf clubs and go shopping for a new lawn mower (the old one bit the dust last fall)  and I didn't think we would have to worry about a new one until April.


Then there was a week with both grandchildren at our house.  We did  a lot of building, but playing on the floor is a bit harder on the knees than it used to be. For me, not him. 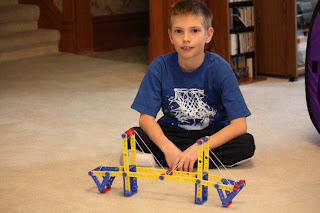 Then there was our internet service deciding to change how we got e-mail.  That was a week right there with several calls to the "tech" guy at Maplecity.com,  huge gnashing of teeth, and numerous impolite expressions of techno-frustration.  There are no pictures or sounds of this out of consideration to the kinder sensibilities of my readers.

Then there was last Saturday's moving day of some final materials at the Warren County History Museum.  This could not have been accomplished without the muscular assistance of several frat boys from Monmouth College. 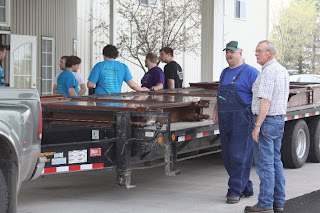 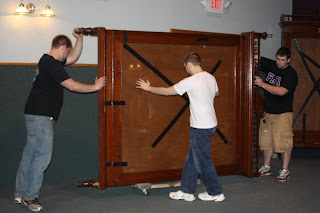 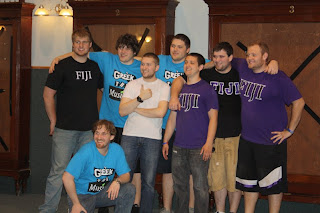 This past week started with an attack on the taxes.  Polished those off early and took off for Chicago to see Tennessee Williams'  Camino Real at the Goodman theatre. It was a directorial and design tour de force, but a despairing message delivered with great panache and acted with uncommon dedication is still a downer.  Talk about crapola.  Pay your taxes and then see a play where all of humanity ends up beaten to a pulp or dead in a dumpster, or both.  It was a good thing that the Warren County Historical Museum's Trivia team (including Jan and me) took the coveted 1st prize at the United Way Trivia Contest on Friday night.  Some good things can still happen in this world.

So here we are at another Saturday.  It looks pretty free, but that new lawnmover does need a workout.
Cancun is still perched on top of the "To do" list. 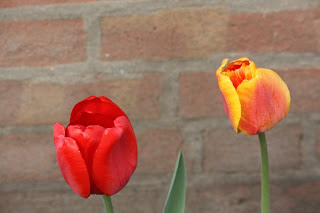 And the tulips are out.
Posted by DramaJim at 9:57 AM No comments:

A former student put me on to this article about the United States Postal Service. It should be a must read for any serious student of communication as it emphasizes some little known history about the service and gives you some insight into the problems it is currently facing.


Going Anti-Postal The Humanist
Posted by DramaJim at 4:55 PM No comments: