Nothing Like the Queen Creek Olive Mill in Arizona 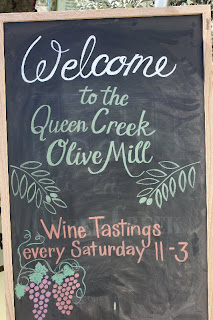 Not very far out of Phoenix/Mesa is a lovely little eatery/tourist attraction that will please you no end in my judgement.  Take yourself to the Queen Creek Olive Mill and spend a pleasant few hours.  First off there is a tour of the only working olive farm in Arizona.  This includes an informative lecture on growing olive trees and the actual making and pressing of the oil. 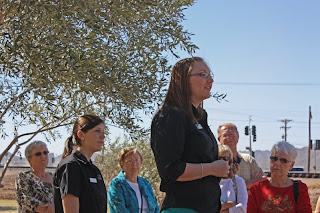 You will also get a chance to taste some of the various oils.  If you are lucky you may actually be there on a day when they are actually pressing. 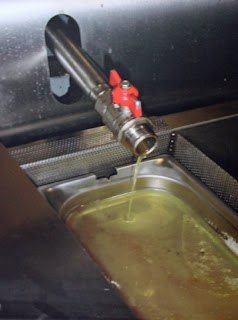 After you are finished with the tour you will definitely want to have a scrumptious and reasonably priced lunch in the restaurant.  Lots of great choices and don't forget to sample their local draft beer. 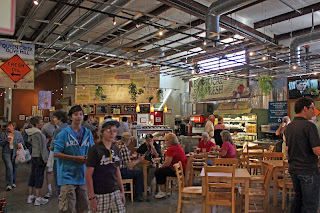 Seating is both indoors and outdoors under a ramada or at a picnic table amidst a small grobe of olive trees. 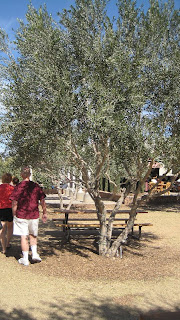 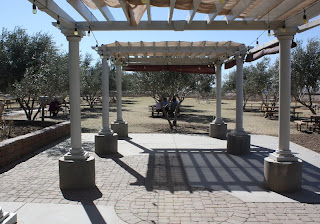 And then there is the store.  It is packed with delicacies and sauces and breads and pastas and I guarantee that you will leave with something.  We stocked up on pastas as they travel well and need no special handling, but the varied sauces and oils are also appealing.  If you are at all into cooking, don't forget to pick up some of the great recipes that are scattered around the store in little card boxes. Everybody had a great time here, including my wife and good friend Sue. 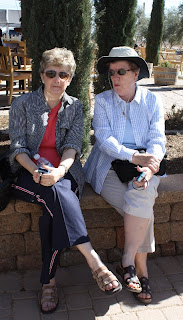 Five stars for this little known attraction that deserves more attention. For more information including directions and opening hours go to their web site at http://queencreekolivemill.com/
Posted by DramaJim at 8:27 PM No comments:

Traveling to Arizona the hard way.

There is nothing like getting round to covering a few Arizona highlights from this past year before it is actually next year.  We left for sunny AZ from Peoria on Feb. 12th.  It was to be a quick direct three hour flight.  What is wrong with this picture?  Only a few things.  After a smooth check-in we boarded the plane only a few minutes late.  A slight additional delay our pilot said, "For de-icing."  With the spraying completed out trusty pilot came on again to announce that he had some disconcerting warning lights on the hydraulic systems.  Back to the gate we went to see if a mechanic could be found. Hmmmmmm.  Looks like a more serious problem. "Sorry folks", said our pilot, "we are going to have to deplane."  Back in the terminal we were finally informed that the problem could not be fixed.  The only solution was to fly in another plane.  Oh yes, it would have to come to Peoria from Las Vegas. Our 8:00 PM departure would be delayed a bit. Actually more than a bit.  Just after midnight three of us potential passengers celebrated our birthdays in the Peoria airport.  The only good thing about it was we were also enjoying pizza provided by Allegiant Airlines. 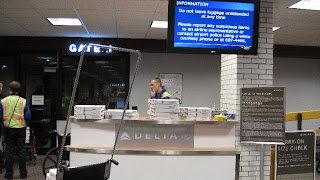 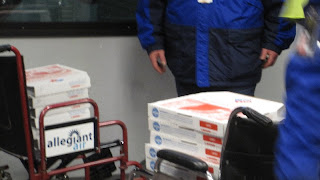 It was marvelous actually as they rolled the pies in on the wheelchairs normally used for disabled travelers.

About 2:30 AM the plane arrived from Las Vegas and we managed to roll out of the gate around 3:20 AM with our pilot announcing pleasantly that we were first in line for takeoff.  By 3:30 AM we were airborne and three hours later  (6:30 AM) we set down in Mesa at 6:30 AM.  Our stewardess, who somehow had managed to keep her sense of humor through it all, announced "Welcome to Mesa, the time is, oh what the hell. Who cares what time it is. We are here!"  Luckily the car rental agency had already re-opened and so we were able to collect our car and head for Sue Van Kirk's house and some well deserved shuteye.  Needless to say Sunday was a bit abbreviated and just a tad foggy.  Still it was great to be there and to stroll out in our shirtsleeves early Sunday evening and get into our neat little red car. 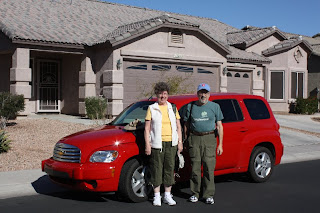 And celebrate with  a truly delicious dinner at the Bella Italia restaurant. 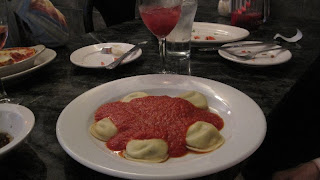 More of our adventures in the next few days. And maybe even some Southwestern cuisine.
Posted by DramaJim at 9:25 PM No comments:

The Tempest Blows Through

Last weekend  (April 9-10) the Monmouth College Theatre Department presented William Shakespeare's The Tempest at the Orpheum Theatre in Galesburg, IL.  Faculty member Bill Wallace anchored the cast as Prospero, but this was an effort that truly allowed many to shine.  First kudos to Nick Munson the student scene designer and then to all of Prof. Doug Rankin's technical staff for a rousing storm complete with parachute sails wafting off to the ceiling over the audience's heads.  Student acting honors go to Matt Shumaker's hilarious antics as Stephano, the principle clown, though the languid grace of Mike Carioto as Ariel also deserves mention.  Challenging modern music played live by Guest artist Dirk Stromberg, Music Professor Julia Andrews, and student Connor Shields added another layer of complexity to the performance.  Holding it all together was director Janeve West who gave us an ever moving and highly physical production.  Yours truly was honored to be included as one of the guest speakers at a Tempest Seminar on the Saturday afternoon before the show opened as well.

A lively and informative look at the music composed for the play was presented on Wed. April 13th at OFTA's (Old Friends Talk Arts) regular meeting.  This was anchored by Brian Baugh of the Art Department who made some of the instruments featured in the production.

One of my few faithful blog readers complained that they had seen nothing new since February, and I do apologize for finding myself so innundated with travel, grandchildren, reading for a talk on Shakespeare's The Tempest in April, and yes a deep case of procrastination--always a lurker on boardwalk of life.

What brings me out of my cocoon is the New York revival of Tom Stoppard's Arcadia.  So much said by others and so many thoughts of my own about my relationship with the show.  First a reminder that this blog takes its title from Stoppard's  Arcadia.   "Stirring the Pudding" comes from a line in the play.

My Stoppard journey starts a long time ago.  Rosencrantz and Guildenstern are Dead spun me around on my ears in the 1970's and convinced me that the best theatre took on great ideas with both literacy and good humor.  Then it was directing my own production of The Real Inspector Hound.  Along the way I saw, in London mainly,  Jumpers, Dirty Linen, Travesties, Night and Day, and the Real Thing.  I missed Arcadia at the National Theatre, but caught up to it during its West End run at the Haymarket.  I still remember it clearly.  We were stuffed together toward the back of the first balcony; it was June and the theatre was like an oven, but my wife and I were transfixed and delighted.  Later we saw the Chicago production and I knew we had to do that show at Monmouth College.  And we did.  Doug Rankin's set for the show did us all proud and several of the students in that production have gone on to real careers in the theatre. It was an outstanding cast and included Mike Fotis, Joe Bozig, Sherry Jirgle, and Beth Dickey.  One of Doug's former professors has an excellent comment on the play and I refer you to it if you want to read some more. Check it out at  http://davidgoingon.blogspot.com/2011/03/arcadia-reflection.html
Posted by DramaJim at 10:04 AM No comments: