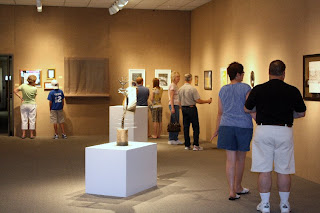 A delighful reception opened this year's Amateur Art Competition at the Buchanan Center for the Arts in Monmouth, IL on Sat. May 29th.  With over thirty works--both two and three dimensional-- tasefully displayed in the BCA gallery, you can let your eyes feast on the creative talent indigenous to Western Illinois. 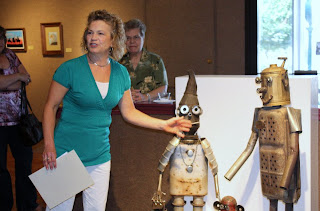 Cherry Simmons, this year's judge, is shown awarding the "Best of Show" prize to a whimisical metal sculpture arrangement by Mike Jones.  The show will run at the BCA gallery for the next five weeks. 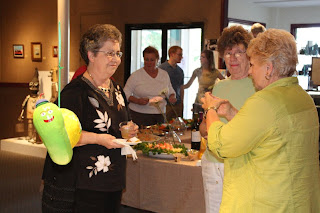 Several of the winners and the judge will be attending the OFTA (Old Friends Talk Arts) meeting on Wed. June 9th at 10:00 AM at the BCA.  Ms. Simmons will make some comments on the show and the artists will share some thoughts about their own creative processes.
Posted by DramaJim at 7:24 PM No comments:

Are Your Taxes Too High!

Are Your Taxes Too High?  Actually the answer is "No".


Even though the "Tea Partiers" are screaming about the government taking too many of your hard earned dollars,  a recent USA Today analysis of federal data shows that Americans paid the lowest level of taxes last year since Harry Truman's presidency.  Federal, state, local, property, sales, and other taxes were 9.2% of all personal income in 2009, which is the lowest rate since 1950.

What might be better for us to scream about would be that mult-imillionaires and billionaires, who pay a maximum 35 percent income tax on salaries and not a penny in Social Security taxes on the vast majority of their income, and who can often call their income from dividends capital gains and pay a maximum 15 percent income tax on them, are also not paying too much in taxes.   And these people have the resources to keep it that way.  They can buy their way into the congressional votes needed to keep the status quo in their favor. For the full story go to:  http://www.usatoday.com/money/perfi/taxes/2010-05-10-taxes_N.htm

I still believe that the best first start to take back our government would be campaign finance reform.   Television advertising is the single largest expense in current campaigns and if we could take a page from the Brits and out and out ban  political commercials, it might start us back toward a leveler playing field. There is no guarantee that such action would improve the quality of the winners, but it would be a bold simple step toward controlling the fundraising necessary to conduct a run for office.  Without the incessant, repetitive, and often truth starved messages of campaign commercials, we would also immediately improve the relative sanity of the air waves.  Just think about a TV world in which you could once again concentrate on trying to figure out if you will be ready when the time is right.

Join Old Friends Talk Arts (OFTA) at 10:00 AM on Wednesday, May 12th at the Buchanan Center for the Arts in downtown Monmouth, IL for a presentation by Ms. Sue Van Kirk titled “A Town, a School, and the Students Who Taught Me” Her collection of short stories, Mr. Vonnegut and Me (and Other Tales from a Teaching Life) will be published by iUniverse in August/September. One story from this collection, “War and Remembrance,” has already been published in Teacher Magazine.


Many locals will know Sue as a colleague or as a teacher of our children, so this should be a most interesting session. She will be dealing with how you accomplish the task of writing about your local community and will also read a portions of one of the stories. 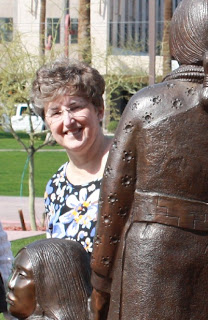 Susan Van Kirk was born and raised in Galesburg, Illinois. She graduated from Knox College and took a job teaching at Monmouth High School where she taught English and speech for 34 years. She was department chairman for most of those years and, along with Jan Willhardt, began an Honors English program at the high school. She earned a M. Ed from the University of Illinois in 1999, and since her retirement from the public schools in 2001 has been teaching in the Education and Communications Studies departments at Monmouth College. She is also the author of the Cliffs Notes editions of Hawthorne’s The Scarlet Letter and Oscar Wilde’s The Importance of Being Earnest.
Posted by DramaJim at 8:24 AM No comments:

Backyard Has Beauty Too

Often the traveler is guilty of thinking that only the distant or unusual carries interest or beauty. We love the Southwest, but can also find equivilent natural beauty just thirty paces from the back door. 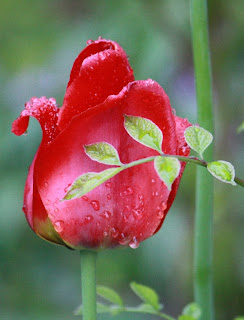 The tulips glisten after an early morning rain. 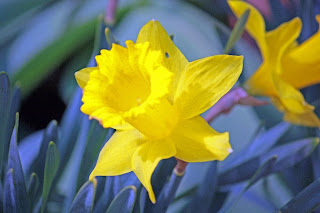 The daffodils were caught in late afternoon while the bunny was spied along the side of the garage when I opened the back door one day. 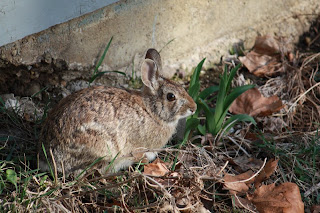 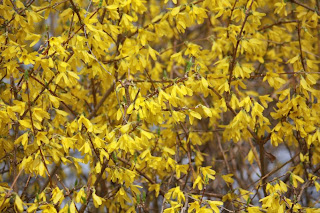 The tulips were almost transparent in late afternoon. 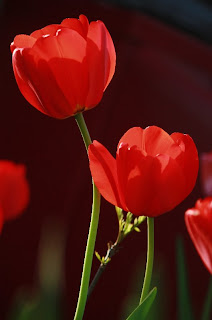 And once again our old apple tree sent out its blooms. 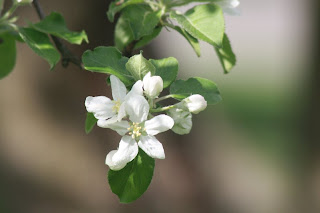 So welcome to the Midwest; it has its glory too. 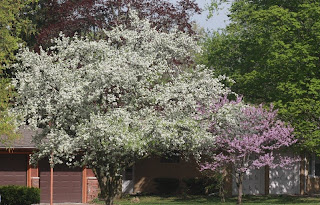