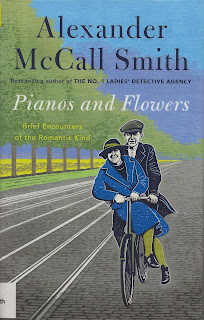 This is a slim throwaway read. According to the forward, McCall Smith was asked to write some short stories for the Sunday Times and he responded by suggesting that he pull some old photos out of their archives and imagine the people and stories the photos depicted.  I also remember being asked to do a similar assignment by a creative writing teacher some sixty years ago.  It is a great imaginative prop, but based on the stories invented (even by a master storyteller) it is more of an exercise for personal development than a true artistic endeavor.  If nothing else is on the library shelf, check it out.  Otherwise take a pass.

Posted by DramaJim at 7:01 PM No comments: 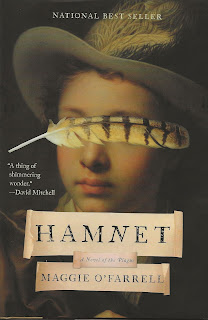 HAMNET by the Irish author Maggie O’Farrell is, among other things, an imaginative recreation of the emotional stress caused by the death of a child. It is historically pinned to the real death of William Shakespeare and Anne Hathaway’s only son of the bubonic plague in 1596.  Even though the mother is called Agnes in the narrative (because that was the name on her will) and Shakespeare’s surname is never mentioned (though the husband in the novel has a career in the London theatre), it is perfectly clear who the main players are.

I am not quite ready to echo the sky high jacket superlatives about this novel, but there is no question that O’Farrell can hold her own when it comes to writing evocative English prose.  When she writes about childbirth, the mysterious ambiance of an English wood,  or the raw streets of London, she demonstrates absolute control of sight, sound, and emotion.  Here are just two passages of the many that grace this book.

“In the countryside there was a forest. . . . And what a forest it was. Dense, verdant, crazily cross-stitched with brambles and ivy, the trees so closely packed that there were whole swathes, it was said,  that received no light at all. Not a place to get lost then. . . .There were creatures in there who resembled humans—wood dwellers they were called—who walked and talked . . . had lived all their lives in its leafish light, its encircling branches, its wet and tangled interior.”

"Agnes cannot believe the noise and the stench. All around are shops and yards and                taverns and crowded doorways. Traders approach them, holding out their wares—potatoes, cakes, hard crab-apples. People shout and yell at each other across the street. Agnes sees, she is sure, a man coupling with a woman in a narrow gap between buildings.  Further on, a man relieves himself into a ditch.”

Her sentences may run on too long for some, but then again mine do too.

Let’s now turn back to the Shakespeare connection.  Hamnet was Shakespeare’s only son and about all we know about him is his recorded birth and death in the annals of Stratford’s Holy Trinity Church. O’Farrell takes this snatch of biography and weaves it into a moving tapestry of the life and inner souls of the entire Shakespeare family.  This includes the families on both sides, his wife, and their three children—Susannah and the twins Judith and Hamnet.  Hamnet gets the nod for the title since a few years after his passing the absent father gives a variant of his name to his famous play. Scholarship over the years has attempted to tie the play Hamlet and others of his later plays to the dead son, but has been hampered by the fact that there is no real proof to back any of it up.

Hamnet is the lynchpin of this story, yet he is not its central subject.  O’Farrell appears more interested in the inner life of Agnes(Anne) and how she tries to deal with her blended families, her long distance marriage, the death of her son, and her own sanity. Her husband’s absence is  perfunctory until it explodes in the text into an astonishing reversal in the pages of the play that makes a character called Hamlet into a household word for a tortured  young man who is dealing, not with the death of a son, but with the death of a father. I admit to a bit of confusion here.

There is one final historical note that gives me pause. There are repeated mentions that the physical theatre and the acting company of our absent London husband and parent was “his.”   This exaggerates the status of playwrights in the Elizabethan period. The theatre Shakespeare wrote for did not belong to him nor was the company he acted in “his.”  The chief player in the company as well as the property owners were named Burbage. The shareholders, one of whom was Shakespeare, were certainly consulted about how to run the operation, but they were never the boss.

Some readers may be slowed down by the non-linear time shifting that O’Farrell uses. She jumps back and forth between the early romance of the couple, the arrival and growing up of the children, and the aftermath of the death of Hamnet rather arbitrarily.

A final positive note is that there is a fairly long semi-chapter that imagines how the bubonic plague was transmitted over months throughout the ancient world from a market in Alexandria, Egypt to a small town in England.  I don’t know if this was inserted in the last edits before publishing or was a fine piece of super clairvoyance, but it sure hammers home the point that our current Covid pandemic bears many similarities to the plague of old.

In sum this novel does stimulate the mind, does a masterful job of lushly portraying a particular historical period, and brings any reader into confronting one of the most searing experiences that any parent can ever know—the death of one of their children.

P.S.  One of my relatives was employed as the nanny for the children of a professional couple in Newtown, Connecticut.   My wife and I happened to be at a family reunion where this woman was present and was called by her employer to summon her back to Connecticut from Arizona to help deal with the tragedy of losing their son to a hail of bullets. There was no happy ending there either. The family she worked for was destroyed. The marriage dissolved and the husband went into a mental decline that ultimately ended with his suicide. But for the grace of God!

Posted by DramaJim at 8:43 PM No comments:

Review: Louise Penny's ALL THE DEVILS ARE HERE 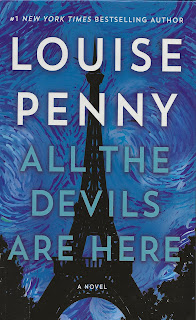 In this 2020 novel Louise Penny dives once again into deep state conspiracies.  Lurking behind and under the idyllic Three Pines with its gourmet pub and quirky characters always seems to lie a fetid swamp containing vicious public or private power mongers who will stop at nothing to obtain and keep their control.  In this outing Armand Gamache deserts the hamlet of Three Pines and travels to Paris to be with his daughter and son in law for the birth of their second child.  While there Gamache’s godfather is seriously injured in a hit and run accident that Gamache feels is no accident at all.  Needless to say from there on the darkness goes deep and the City of Light is fraught with plots from the tip of the Eiffel Tower to the sub-basement of a preeminent historic library.

The twists and action come a mile a minute, as long as you accept the massive coincidences that set up the story. As in a number of her more recent works, the setup does push the “willing suspension of disbelief” to its limits. Would  Gamache’s Godfather, although a complicated pursuer of wealth and power himself, engage in actions that would knowingly  put his godson, his godson’s wife, their children, and their grandchildren in physical jeopardy?  I think not.  It is also hard to accept in these days that anyone could peddle a billion dollars of old master paintings in order to fund a plan without ringing alarm bells somewhere in the vast inter-connected international art scene.

That said, I also have to admit that the lack of credulity in the setup is forgotten about a third of the way through. After that you are caught up in the search and the monstrous horror of the developing conspiracy. Penny’s recurring theme of powerful people going wrong in their search for more money and more power takes over.  The fact that the suspects are often people that Gamache knows well puts him in the difficult position of deciding whether they are part of the solution or at the center of the problem itself.

Ms. Penny plainly shows her love for Paris on her sleeve. She has done her site research thoroughly and captures the sights, the sounds, and the food of the city with expertise and love.  I have visited the city twice over the years and  had no problem following the action and in believing what the title hints at.  Is it possible that “Hell is empty and all the devils are here?”

Don’t neglect reading the acknowledgements at the end because they do add considerably to the creation of the novel and to Penny’s own life journey.