The Chief Justices by Daniel Cotter 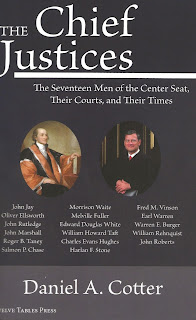 Dan Cotter is a Monmouth College graduate and former student who is a Past President of the Chicago Bar Association and remains a top tier lawyer in Chicago. His new book, The Chief Justices, is a compendium of the lives and legal decisions of the seventeen men who have occupied the center chair at the Supreme Court since the beginning of the Republic.  I was initially a bit fearful that the volume would  pile up the legalese and put it out of touch for the lay reader, but I could not have been more wrong.  I am pleased to report that Dan stays out of the weeds and writes with a declarative precision and clarity that makes his work perfectly accessible to the general public.  It may not be a summer beach diversion, but it does give anyone with an interest in the political history of our country plenty of facts and ideas to chew on.

The organizational pattern is crystal clear. Each Chief Justice receives a short bio, an historical analysis of the era in which his appointment was made, and an outline of the noteworthy decisions reached during his years in office.

Although some of the men are now pretty obscure, the treatment of John Marshall, Earl Warren, and John Roberts stood out for me.  Marshall retains the honor of the longest tenure as Chief and Cotter outlines clearly how he literally established the court, built its image, and solidified its acceptance as the ultimate arbiter of law for our country.  One interesting thing Marshall said in 1835 caught my eye. "In the excitement produced by ardent controversy gentlemen view the same object through such different media, that minds not unfrequently receive precisely opposite impressions."  This syntax is rather masculine for our era, but the observation that intelligent people can process the same facts and arrive at totally different conclusions is as true today as it was when uttered. We can ignore this truism only at our peril.

The chapter on Chief Earl Warren was full of information.  Even though I lived through it, I don't really remember the long and complicated background of Brown v Board of Education or that there were actually two Brown decisions and that there are still cases dealing with Brown working their way through the courts today. A prescient observation from the Warren chapter was a quote cited from just before Warren's death in 1974. In referring to the Nixon crisis, he said  "No man, not even a King, can put himself above the law. I am confident that the Court will do its duty and so will the nation." All I can say to this is, "Well, we can hope."

Each chapter contains at least one nugget. The details surrounding the impeachment of Andrew Johnson under Chief Salmon Chase were new to me. And did you know that the question of whether "corporations are people?" has been around since at least the 1870's. There are also comments on the still controversial  Roe v Wade. Cotter points out that the decision did not really legalize abortion; it did not "grant a right to anything, but a right against something, the right not to be prosecuted for performing an abortion or obtaining one."

The final chapter deals with the still running term of Chief John Roberts. He could easily pass the tenure record of Justice Marshall as he is now only in his sixties. Cotter sees the Roberts Court as still evolving, but definitely the most conservative in several generations. The current five conservative members seldom if ever decide against their political party and the influence of the Federalist Society cannot be underestimated.

There is a lot more that I could mention, but the space does have limits. Cotter's conclusion is that although the Court in the past has had a measured impact on the country by generally slowing down the speed of most major changes, the politicization of the current Court is an established fact. Time  will tell whether the future will be different in a system that now depends on clear political vetting of all nominated candidates to the Court.

As I think you can tell by now, I enjoyed and would recommend this book and not just because it is from an alum of the college I taught at for 39 years. It told me some things I did not know or did not remember about the history of my country in an even handed and non-partisan way. And to top it off it followed a rock solid organizing principle of telling us what will be told,  then telling us, and finally telling us what was told to us. Kudos Dan!


p.s. Any errors in trying to summarize Dan's book are mine alone and others may certainly settle on different ideas from the many represented.
Posted by DramaJim at 8:51 AM No comments:

Why is it that the days seem shorter and more frantically full here in Monmouth?  Or is it the daily familiar grind doesn't appear to merit notice?   I am thus moved to make a brief entry that sustains the thought that change attracts attention and is more apt to be memorialized.   We start with last week's magnificent sunset that we appreciated from our front porch. 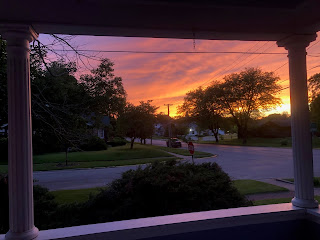 For more summer delight we had to take the train to Chicago where a magnificent exhibit of Manet's paintings at the Art Institute. This one just seems always to catch the spirit of how the world ought to be in everlasting sun with a love at your side and the blue water trickling bye. 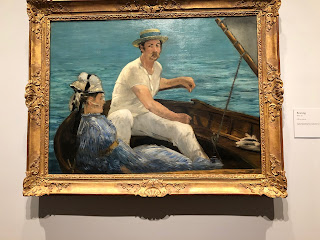 Lunch in the Art Institute's fabulous courtyard with a mama duck and her charges. 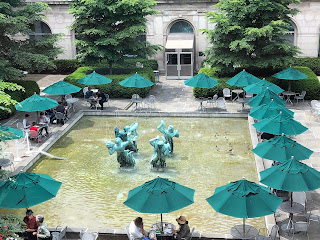 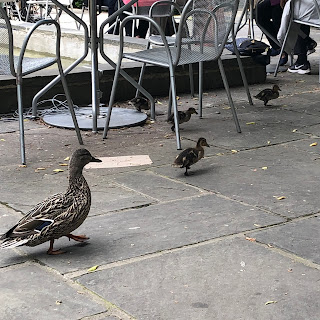 I am always brought up short when I see something that says theatre.  This lifesize statue  no longer has a head but the ancient mask remains at his side to declare that this is an actor. 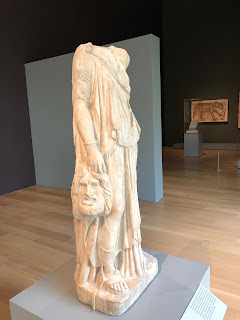 A special Art Institute treat was to discover just before we left that there was a lovely exhibit of London Underground Posters on view.  This exhibit was put together by the British Museum, but we had seen many examples of these charming, colorful, and skillful ads at the London Transport Museum in previous visits to our favorite city in the world. Without a car and never quite flush enough to take a taxi, Jan and I were constant users of the tube and buses. 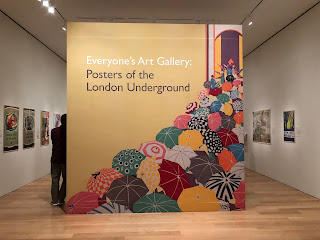 We have seen literally hundreds of plays in our many visits and traveled to most of them on the tube. 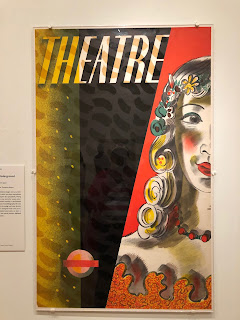 I loved this one as it delved below the surface to show you the complexity of tunnels that exist beneath your feet as you travel.  Oxford Circus was a maze when it opened as it was a crossover between the Bakerloo and Central Lines.  Today it is even more complicated because it is now also a Victoria Line stop. 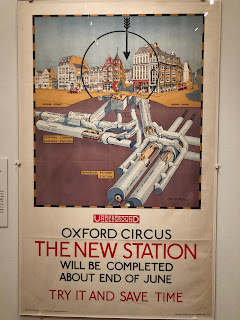 We loved this one for its colors and the fact that we spent time in London during the spring on several of our trips.  And also because Kew was my mother's favorite spot when she visited us in 1971-72 while we were living there. 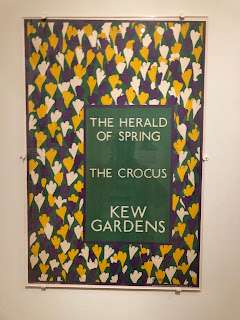 Later that day we had a lovely dinner with two of my now also retired Monmouth College colleagues
and their spouses.  We are so blessed to have made so many close friends during our working years and that we  have been able to continue sharing their lives even though many of them are dispersed around the country now. 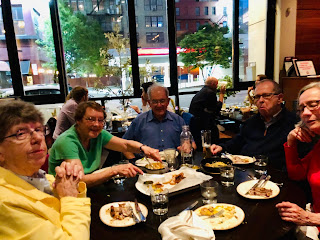 Posted by DramaJim at 9:52 AM No comments: