Bernhardt/Hamlet Struggles at the Goodman Theatre 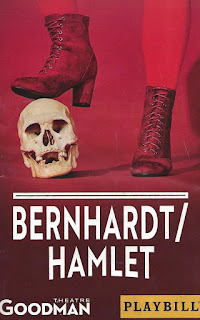 I really wish I could be more positive about Theresa Rebeck’s  Bernhardt/Hamlet which is currently running at Chicago’s Goodman Theatre. I am a theatre historian and director by trade and anything about the nature of theatre and its practitioners is always an attraction for me.
Unfortunately Ms. Rebeck lost her way somewhere along the long gestation of this piece and has produced an occasionally amusing piece of backstage gossip that ends as a pastiche that might better be named Bernhardt/Rostand.
From a performance point of view Chicago’s own Larry Yando steals the acting honors while the rest of the cast including Terri McMahon as Bernhardt recedes into the bric-a-brac strewn all brown stage of Ms. Bernhardt’s theatre in Paris. It contains the detritus of all rehearsal spaces which here means racks of costumes, book shelves on wheels (Remember the recent Music Man), tables and chairs, walls hung with old props, etc. The scenic environment is dominated by two puzzling features I have yet to connect to the play. First there are two flying canted chandeliers that seem to have been pirated from the Phantom of the Opera. Why? Not sure--maybe the out of kilter world.  Also puzzling in the set are two stuffed deer heads that are given special spotlights so someone must want us to look at them. Again I am not sure what they are supposed to represent--perhaps they are two more of Sarah’s expired exotic pets.
Now on to the content. Act I gives us a strong and lusty actress who argues persuasively to several male friends, including her current lover Edmond Rostand, that she has every right to play Hamlet and not be kept to the lesser female roles in the play. We get this argumentative thrust along with snippets of rehearsal scenes for about fifty minutes before a rather quiet act ending. As the 2nd act opens Sarah’s affair with Edmond Rostand starts to take up more and more of the oxygen of the play. Rostand is trying to finish his Cyrano de Bergerac while trying to keep Madame Sarah from rewriting Hamlet into more understandable prose. Rostand’s long suffering wife, a strong Jennifer Latimore,  appears with the script of Cyrano in hand to plead that Sarah stop trying to usurp her husband’s time and let him finish his master work. This is followed by Larry Yando’s rather lengthy star turn in a scene from Cyrano itself. With three quarters of the 2nd act now devoted to juicy turns by actors other than the lead, we do need some more potent fireworks to return us to the central issue of gender switching. What we get is a smattering of sword play and finally Ms. Bernhard, rapier in hand, dancing upstage as the rear wall slides aside to reveal a strobe lit and smoke filled Valhalla. It is a clear intent to elevate Bernhardt to some kind of rock and roll stardom via a note that her Hamlet appearance was saved by a silent film clip, but I’m afraid it just came off as a bit hoky to me. The coronation just doesn’t seem earned by anything we have seen Sarah or Teri McMahon say or do in the play. Maybe if McMahon’s Sarah had more star oomph, it might have come together, but it didn’t and I left the theatre feeling as though an average dinner ended with a missing dessert. 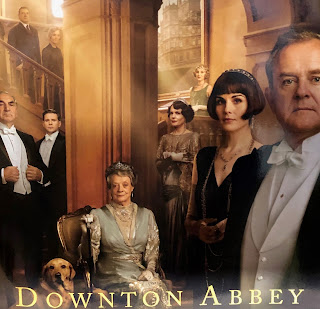 My wife and I saw Downton Abbey—The Movie a week ago and as promised, my more detailed reactions are now available here.

If you have seen the Downton television series, watching this film is like slipping into a pair of well broken in bedroom slippers or dipping into a bowl of strawberries and clotted cream. If you have not seen the TV series, the plot and the character’s relation to it may come at you rather too rapidly. The back stories from the series are numerous and critical so it does help that the  initiated know why Lady Mary and Lady Edith greet each other tentatively. They are already primed and ready to laugh at Maggie Smith’s every acerbic remark. They know without needing to ask about the crosscurrents circulating below stairs and it is no surprise when Mr. Carson returns to assist with the royal visit.

It is also not surprising that the eye candy Abbey and the incredible outfits worn by its inhabitants steal the pictorial show. Downton Abbey itself is imposing and timeless in glorious dawns, sunny days, and torch lit evenings. Never are there repair scaffolds to mar its enveloping and stalwart presence.

Sure we are watching the final gasps of a life style destined for discard and just waiting for the Depression, the rise of National Socialism in Germany, and the next Great War. Yet, while the party goes on, we can revel in all the characters and their soap opera conflicts. A royal visit must be prepared for; Buckingham Palace servants must arrive and put downstairs into a tizzy; and a mysterious Irishman must lurk in a dark pub with Tom to give us just the right amount of violent possibility. Just like the TV series,  the elements are tied up in a nice bow at the end leaving only a few threads hanging that could be used for new episodes should the prolific creator, Julian Fellows, wish to take us into the 1930’s.

In sum my wife and I loved the film. We loved the color, the pageantry, the costumes, the family disputes, and the class warfare.  We fully realize the world depicted is as much romance as King Arthur’s Camelot and we fully acknowledge that the lives of the servant class were far harsher than depicted.  Yet, we loved it still.  Chris Jones said in his positive Chicago Tribune review that “The only justification for privilege is service,” and The Downton family does seem to exemplify this in spite of their obscene wealth.

And let’s face it, when all is said and done, you just have to love slipping on a pair of well broken in bedroom slippers and eating berries covered with clotted cream.