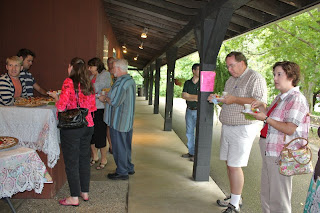 Around thirty theatre folks from around northwestern Illinois met last week at the Timberlake Playhouse outside of Mt. Carroll, IL for a lunch, an afternoon of networking, and a delightful production of the "25th Annual Putnam County Spelling Bee."  The event was co-sponsored by the Timberlake Playhouse and the Illinois Theatre Association. Brad Lyons, Artistic Director of TLP for 12 years, was the idea person behind it in his capacity as an ITA board member for the Professional Theatre division.
Participants were welcomed by current Timberlake General Manager Melissa Mattingly Parsons and Artistic Director James Beaudry. 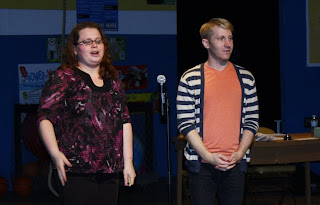 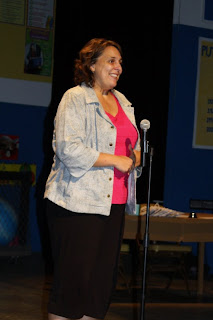 and then the  group was given a full tour of the Timberlake grounds. 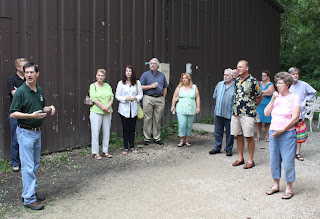 Below is the outdoor rehearsal pad and the company dining hall. 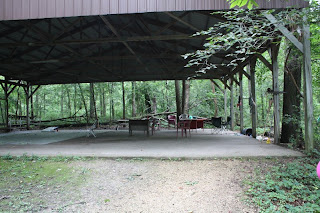 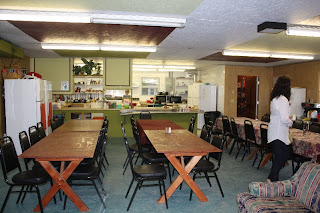 This is the kind of gathering that the Illinois Theatre Association would like to see in all parts of the state. As Ms. Parsons noted, visiting other companies and seeing their shows is still the very best way to start good interchanges among the theatre community. 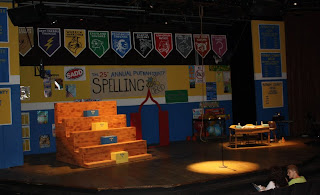 So it's time to get on with the show during the 49th season of the Timberlake Playhouse.  If you attend don't forget to stop at their gift shop. You'll always be welcome. 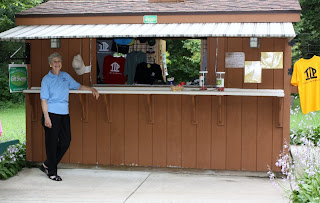 Get more information on the Timberlake Playhouse by going to http://www.timberlakeplayhouse.org/
Posted by DramaJim at 12:03 PM No comments:

OFTA goes to the Wetland Prairie

There is a litttle lake near Woodhull and our intrepid dozen OF'ters trouped on down to learn a bit about prairie plants. The day was hot, but the picture opportunities were many. 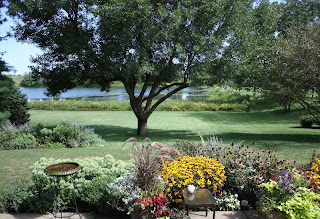 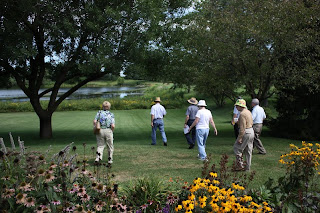 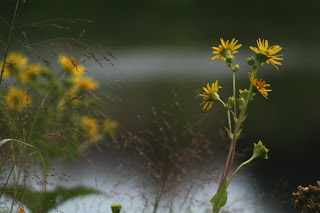 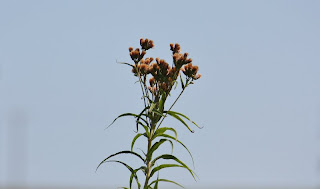 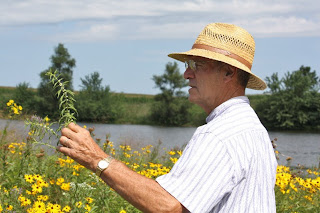 George Olson, our guide, was extraordinary. 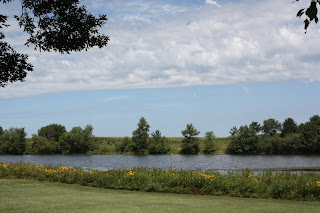 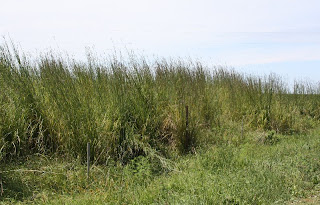 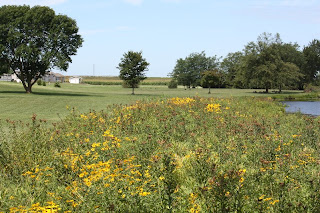 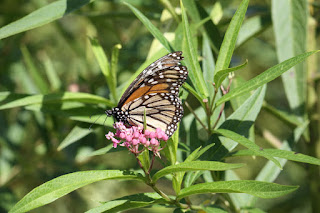 Even the monarchs were paying attention.

If you love the prairie and its flora,  look for a book titled THE ELEMENTAL PRAIRIE published by the U. of Iowa press.  It has gorgeous paintings by George Olson and a nice text by John Madson.
Posted by DramaJim at 5:01 PM No comments:

Summer Theatre in the Berkshires

As the slings and arrows of outrageous retirement have increased, it is probably not too surprising that my thoughts should go toward more frequent travels to see theatre than to stay home and do theatre. In that vein you could do a lot worse than the Berkshires in northwestern Massachusetts.  It’s a bit further for us than the Stratford or Shaw Festivals, but if you feel the need for an out of the Midwest vacation with a theatre component,  this is a place to head for.  The Berkshires are currently reveling in their pick by “National Geographic Traveler” magazine as the seventh best out of 133 travel destinations in the US. The countryside is wooded and rolling and the towns in the thirty miles or so surrounding Pittsfield, MA are filled with quaint general stores, quirky antique shops, the homes of the famous, art galleries, and scads of eateries.  It's all interstate and turnpike to get there, but five minutes out of the toll booth puts you into a relaxing world of winding two lane roads and drop dead gorgeous scenery.
The theatre is first rate and the main companies are all Equity and loaded with New York actors taking a bit of a summer hiatus. We saw two shows at Shakespeare and Company—a moving The Winter’s Tale and a splendid Richard III with last year’s Broadway sensation Othello John Douglas Thompson in the role of the grand manipulator.

Stockbridge, MA is home to the Berkshire Theatre Festival. It has been going strong for eighty-two years. We saw a gently humorous The Guardsman by Molnar. This seldom produced show was a long run triumph for Alfred Lunt and Lynn Fontanne back in the 1920’s. Molnar is perhaps better known as the author of Lilliom, which was turned into the Broadway musical Carousel. This year’s season also features plays by Albee, Beckett, Shakespeare, and Rogers and Hart.

At Pittsfield, MA we visited the home of the Barrington Stage Company. They are located in a nicely remodeled old former vaudeville/movie house. We saw a somewhat problematic production of Yazmina Reza’s Art, but had we been around longer there would have been a rich variety of other shows ranging from Sondheim, Miller, and Ayckbourn to the world premiere of a new musical call Pool Boy.

The Williamstown Theatre Festival was our final stop. It is centered in the splendid new theatres on the Williams College campus.

We saw a beautifully acted new play called After the Revolution that is prepping for a fall Off Broadway opening and an Our Town that had a controversial scene design element featuring a vertical curtain of empty chairs and tables about thirty feet upstage. Several were removed at the start of the show to make for a center exit. Some in our group thought it distracted from Wilder’s “empty stage” concept; others found it a powerful new metaphor (especially when lit from behind) for all the graves waiting for us.

Each of the theatres mentioned have full programs of shows throughout the summer and they all have excellent training and intern programs as well. For those times when you want a rest from theatre going, you can pick and choose from other cultural activities. The Jacobs Pillow Dance Theatre and Tanglewood (The Boston Symphony’s Ravinia) are nearby. The Clark Institute of Art and the Williams College Museum of Art are in Pittsfield just a few miles away the Massachusetts Museum of Contemporary Art (Mass MoCA) in North Adam. During the day you can tour a variety of historic homes, including those of Herbert Melville, Edith Wharton, and Susan B. Anthony.

All in all I would highly recommend a trip to the Berkshires for your next summer’s vacation.

P.S.  As time permits over the next few weeks I will be doing more coverage of our two Road Scholar theatre trips to the Berkshires.
Posted by DramaJim at 8:35 AM No comments: