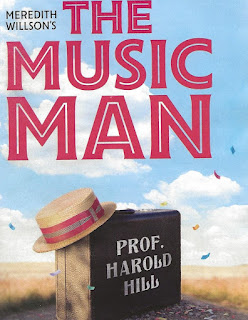 We took the train into Chicago on Thursday to finish out our 2018-19 Goodman Theatre season tickets with Meridith Willson’s  The Music Man.  I have seen the show a number of times over the years in high shool, college, community and professional productions.  I have also seen the film with its reprise of Robert Preston’s iconic original  cast performance.  This Mary Zimmerman directed production  was a very good but not quite great revival of this now venerable  “old school” musical comedy.
I say “Old school”  because we are treated to fully instrumented act overtures in front of a nicely painted  show curtain.  Then, it is on to plenty of catchy now standard tunes  like “Ya Got Trouble” and “Shipoopie.” They are given rousing performances by this clearly talented company.  They also dance their way through some of the most sparkling, acrobatic, and inventive choreography I’ve seen in some time. Their use of simple props like steps, tables, and library stacks on wheels was both cativating and ingenious.

This brings me to the dynamic scene design that was replete with a number of Zimmerman touches like a miniature Wells Fargo wagon rolling along the corn field ground rows at the back of the stage.  The scenes flowed quickly into one another as the cast moved set pieces on silent castors and larger pieces dropped on motorized lines.  Money does talk here and only upscale spaces can afford this kind of technical equipment.
The energetic and racially diverse cast is on the top of its game.  Pulling out minor players for special notice is challenging when the full ensemble is so talented. If pressed I would nominate Matt Crowle for his back breaking turn as the Anvil Salesman and Mary Ernster as the all Irish Mrs. Paroo.  Of course you can’t forget the youngsters who come close to stealing every scene they are in.

I leave the two leads to the last because I am afraid that they are the reason I found the show just short of a gold star.  Harold Hill and Marian Paroo are one of many opposite pairs that run through traditional musical comedy.  Think of The King and I, The Sound of Music, Porgy and Bess, South Pacific, My Fair Lady, etc.  Unfortunately there was just something missing in the two leads. Geoff Packard as Hill was  handsome and engaging  he could really sing unlike Robert Preston.  But  somehow I would also like to get from him a bit more of a hint that he is aware he is a charlatan.  His final apology to Winthrop still seemed  too off the cuff and cursory.  Monica West’s Marian may be even more of an issue.  Her voice is pure and strong but brittle in the higher ranges. This does support her coldness of manner in the early going.  Yet she seemed too stiff for too long. I was looking for more hints  earlier that she was finding interest in Hill while fighting her more conservative instincts.  To be fair this may also be because the  romance songs  (Goodnight My Someone and My White Knight just aren’t quite as good as they might be.

At the top of the production chain sits the talented directorial hand of director Mary Zimmerman.  She orchestrates so smoothly that the average viewer probably misses how much her baton adds to each and every effect. She is a master orchestrator of movement, visual palette, sound, and emotion.  Her choo choo curtain call is almost  worth the price of admission alone.

So should you see this production?  Definitely!  Anything that Mary Zimmerman touches is worth seeing and learning from. And anything done with the overall quality of a Goodman Theatre production is worth attending.

Posted by DramaJim at 7:53 PM No comments:

Spying on the South

Tony Horwitz's Spying on the South is funny, thought provoking, and ultimately a bit frightening book. He has been a writer for the New Yorker and a foreign correspondent for the Wall Street Journal, but this "road" story puts me more in the stylistic realm of Paul Theroux or Bill Bryson.  Thematically though it falls into a basket with some things I've read recently like J.D. Vance's Hillbilly Elegy and David McCullough's Pioneers.

The book is built on a modern re-tracing of the Southern travels of Frederick Law Olmsted just before the Civil War.  Olmsted, you may remember, went on in later years to become the superlative landscape architect who designed Central Park in New York City and many other public spaces. Olmsted's travels took him through through the deep South by steamboat, wagon, horseback, and on foot and though  Horwitz cheats a bit by sometimes using a rental car he does sample the rails, a river barge, and even a mule. Olmsted, says Horwitz,  starts off with a desire to write about the South as objectively as possible, but by the end of his journeys he has become a fairly committed abolitionist. What is truly frightening though is that Olmsted's reports on the actions of slaveholders and viciousness of their their fight to retain slavery are revealed by Horwitz to be still current if now more submerged today. This sad note is salvaged somewhat by Horwitz's lively and humorous depictions of the folks he meets in eateries, bars, and businesses along the way.

I enjoyed the coverage of all the aorta clogging southern food and precise portraits of people like a woman of German and Mexican heritage who described herself as a "beaner schnitzel."  Small town talk is often both humorous and  revealing. For instance one local small town resident comments,  "You don't really belong (in this town)  unless you have a park or street named after you."  Horwitz also has the knack of  breaking into the natural suspicion of strangers and getting them to talk. There are delightful stories about Huey Long, Mud Festivals replete with monster trucks, and even mule wrangling. Olmsted  often had to stay in  horrible inns with poor food and Horwitz  often approximates this by finding his subjects in seedy motels and dark rundown bars. He asked one denizen "What do people do here?"  The reply was "Meth and some Opioids."  In another tavern he asked a patron, "What's your occupation?"  The sad response, after a long pause, was, "I'm a barfly."

Unfortunately these tales stop being funny or entertaining after a while. There is just too much   cynicism and despair in too many of these folks. Their future is either bleak or non-existent. Drink, drugs, and lack of education are endemic. Olmsted's journey ultimately ended with similar irony. His visions of agrarian bounty punctuated by bucolic parklands and grassy meadows have now been eroded by cookie cutter suburbs and malls. The budding cities that Olmsted toured so long ago are now disorganized concrete jungles with little connection between their cores and their surroundings and the many small communities that once dotted the landscape are now dispiriting decaying shells of habitation.  How did all those sturdy pioneers miss the boat on all parts of the scale. We now are facing a societal and personal loss that may not be solvable by our technology. One worker interviewed by Horwitz laments the days of his father whose stated code was "All you need is what you need, not what you want. . . If you had too much you took it to your neighbors."  That world may indeed be gone in the Trumpian landscape, but the lack of respect for diversity and the environment,  approval of fraud, and outright worship of naked power and nastiness over knowledge and empathy makes me tremble along with Mr. Horwitz for our future.

Posted by DramaJim at 4:24 PM No comments: