In the Neat Net Tricks newsletter by Jack Teems I found this item.

"In recent consumer tests conducted in Great Britain, one item was found to have five times as much bacteria as a toilet seat. One study in which a scientist swabbed 33 of these found food poisoning bugs such as e.coli, coliforms, staphylococcus auereus and enterobacteria. The device had 150 times the acceptable limit of bacteria. Four of them were considered a potential health hazard and one was "condemned." Users of these were "at high risk of becoming ill from contact."

So what's this sinister contraption I'm talking about? It's the computer keyboard, and now you have still one more thing to worry about."

Why does this occur? According to Teems it is because noone washes their hands before computing and everyone eats over the keyboard allowing all sorts of half chewed food particles to infest the inner recesses of the machine. YUCK!

And have a nice day.
Posted by DramaJim at 8:27 AM No comments:

THE BOOK OF AIR AND SHADOWS by Michael Gruber

If you need something to pack in your luggage for that Caribbean cruise or a north woods cabin, you might want to sample Michael Gruber's mystery-thriller The Book of Air and Shadows. It features Shakespeare (as you might imagine from the title), but with more of a Da Vinci Code twist. The story line centers on the existence of a lost play (about Mary Queen of Scots) written by William Shakespeare. When letters from a 17th century soldier turn up as stuffing in the end covers of an old set of sea faring histories, there is a mild stir in the rare book industry. Then it is discovered that the soldier may have been a spy and his target was Shakespeare and the rumored lost play. That sets off a firestorm of searching and greed. Critical information on the lost work is coded and soon you have a manuscript dealer's employees, a quick tempered intellectual property lawyer and his family, scholars on both sides of the Atlantic, cryptographers, and mysterious groups of Russian and Israeli gangsters all vying to see who can "crack the code", and find the prize.

Gruber has more than enough romance and tantalizing discussion of espionage and ciphers to keep your mind engaged plus an action packed narrative filled with murder, mysterious disappearances, kidnappings, car chases, and plain old fisticuffs. It is a nice combination and if you are looking for something a touch theatrical and a bit more than a sandy beach throwaway, The Book of Air and Shadows may be an ideal choice for a reader for the summer. For copies check your local library or bookstore.

A sideline that has nothing to do with books is that once again the intelligence of computer search engines when exposed to irony has been exploded. I noted this morning as I was writing this issue of Stirring the Pudding that one of the google ads running on the sidebar was for Jello.
Posted by DramaJim at 8:50 AM No comments: 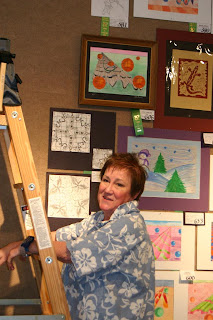 The Wednesday, June 11, 2008 10:00 AM meeting of OFTA (Old Friends Talk Arts) will offer a special treat when Susan Twomey, the Executive Director of the Buchanan Center, tackles an assessment of her first three months on the job. Her topic is “Where I See It Now.” She will explore where the BCA stands from her point of view and where it might and can go. As she said, “I’ve now had a chance to measure the situation and I think I am ready to share some of my goals and dreams for the future.”

Ms. Twomey brings a strong background of arts, education, and management experience to the table and has already shown that the great strides made to fulfill Grace Buchanan’s vision over the past twenty years can be used to build an even more exciting future. OFTA is honored that she has chosen to share her initial vision for the future with us and invites all members of the community to attend.

OFTA meets on the 2nd Wednesday of each month in the main gallery of the Buchanan Center for the Arts on the public square in Monmouth, IL. Admission is free and refreshments are available. If you have an idea for a program on an arts related topic or wish to talk about your own artistic work, contact Jim De Young at 734-5529 or jdeyoung@maplecity.com. Scheduling opportunities are still available for this fall.

OFTA is partially supported by grants from the Buchanan Center for the Arts and the Illinois Arts Council, a state agency.
Posted by DramaJim at 8:16 AM No comments:

The pudding has not been stirred for a number of weeks and I would beg all two or so of my committed readers to cut me a bit of slack. Hopefully we will return to a bit more frequent posting in the future. 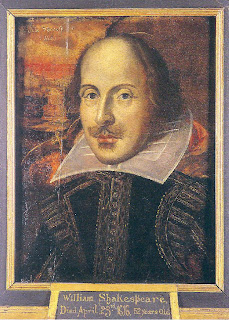 Bill Bryson, native born Iowan and Anglophile, is best know for his travel books like Notes From a Small Country (England), A Sunburned Country (Australia), or his musings on language (The Mother Tongue). His latest effort looks at the life and times of the world’s most famous playwright and is titled simply Shakespeare. It’s a slim, breezy read that covers most of the bases in clear non-scholarly prose. For frosting there’s a nice layer of genial humor that often pokes fun at some of the literary excesses offered in other Bardic biographies. Overall this entertaining book might be an ideal introduction for the neophyte or the high school student who gets a case of the iambic pentameter blues whenever the name of Shakespeare is mentioned.

While providing a readable introduction to Shakespeare’s life for an unspecialized audience, Bryson's book also offers some tidbits to the more experienced reader. He makes an apt observation when he notes that only 230 complete plays survive from Shakespeare's day and an astounding fifteen per cent of them are found only in the justly famous First Folio. He adds delightful sensory information when he describes the odorific industries that were centered in the Southwark area in the early 17th century. Going to the Globe was a lot of things, but, according to Bryson, it was always smelly. An item that was new to me was the story of how the American Showman P.T. Barnum influenced the turning of Shakespeare's Birthplace in Stratford-Upon-Avon into a National Shrine. It seems that in the early 1840's Barnum had a plan to dismantle and ship the entire building to the USA, put it on wheels, and tour it around the country. This shook up the English public so much that it galvanized a plan to purchase and save the site for the British nation. Overall this is a book that will appeal to both the beginner and the scholar.
Posted by DramaJim at 8:49 PM No comments: