A Musing on the Altar of Misguided Absolutism

Picked up a book called  "Despite the System: Orson Welles versus the Holywood Studios" by Clinton Heylin at a recent library leftover sale.  Ran across this idea in a letter from Mr. Welles to the RKO studio head while he was in the process of trying to sell the screenplay of CITIZEN KANE to him.

Welles called John Foster Kane a man who had the "enraged conviction that noone exists but himself . . . . "  This stance means he refuses to admit the existence of other people with whom he must compromise, that they may have feelings that should be considered, and that those people may have an ability to do damage to both you and your ideas.

Might this be a problem for many of our political figures on the far right and far left who find it impossible to accept anything less than 100% of their goals?

Sometimes even part of a loaf can keep you from starving until the opportunity for another meal comes along.
Posted by DramaJim at 11:27 AM No comments:

What more could you ask for? It was a gorgeous October day. 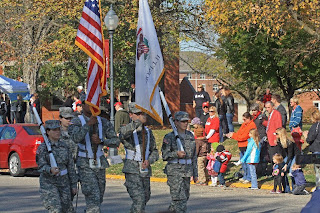 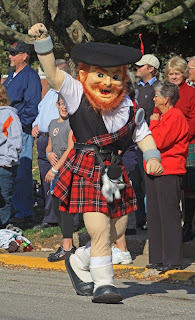 Our band was right in tune 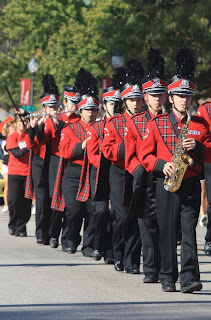 The pipers, as always, added their own brand of haunting sound. 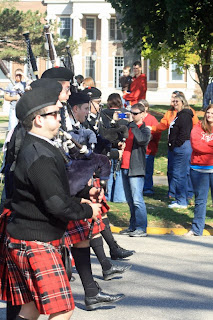 On the sidelines vintage alums like Ralph Whiteman chatted with Ira and Marge Smolensky.   My wife and I were able to retouch base with students from as far back as the seventies. 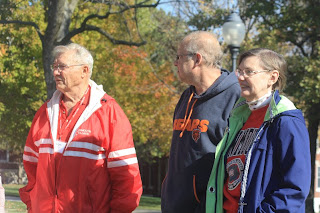 Did I mention it? The football team won too. 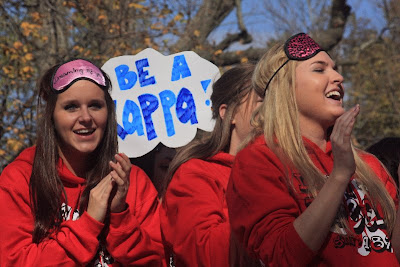 Posted by DramaJim at 1:20 PM No comments:

A Smell Test for Better Communications

In reviewing a newly published book on newspaper columnists this morning on MSNBC,  the conversation turned to  the disintegration of real writing and commentary in the past twenty years.  As one participant put it, we tend to write today about “what we think” rather than  “what we see.”  The  insatiable twenty-four hour news cycle pushes writers  and/or media personalities to cough up new opinions every quarter hour in order to stay current.  There is no time to tell a story and then reflect on what it means;  there it only that “X” happened and I do or don’t like it.
Under the pressure of producing clicks or eyeballs for advertisers  all comments must be extreme and strident.   The commentator must be positioned  on the outer edge of any argument  and then illustrate it with booming denunciations that echo like a drum in a canyon of tall buildings.  Each new proposal or idea from someone else is automatically  “dead on arrival”  or “idiotically stupid.”  Fellow citizens whose only crimes are a different view are immediately  compared to  Hitler.  Is there no such thing anymore as an opponent on another team who is simply trying to win the game for his side rather than attempting to strip you naked and herd you into a gas  chamber.   Think  musician and Monday Night Football.
Verbal  vomit  projects wildly in all directions and does not care who or what it bespatters.   All I know is it stinks and our atmosphere and our country would be better off with less of it.
Posted by DramaJim at 9:57 AM No comments:

Shopping For Porcupine: A Life in the Arctic by Seth Kantner 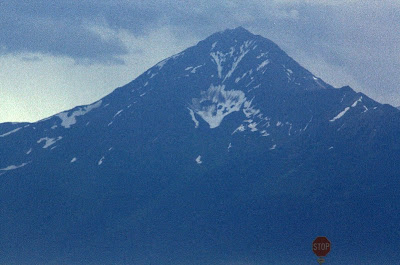 STOP!
Just when you think your Alaska vacation is over and done with, along comes Seth Kantner and his remarkable elegiac book, Shopping for Porcupine: A Life in Arctic Alaska.   You can't pigeon-hole this series of vignettes because some are autobiographical, some historical, some sociological, and some almost religious. His musings begin with "My memory started under snow . . . " and proceed through childhood and adult experiences that always seem to focus on the land and the people who survived on it. The text is accompanied by exquisite color photos mostly taken by the author.
All the animals are there. You meet (and see in the photos) the caribou, the musk ox, the seal, the salmon, the bear, and of course the porcupine. The quirky title essay doesn't arrive until midway through the book, but it demonstrates the overreaching theme.  A porcupine has been killed, skinned, butchered, and the meat saved in a nice plastic bag.  Kantner reflects,  "I stand back and look at the brown plastic bag laid gently closed, the shiny jetboat, the red gas cans and heap of guns. The cooler full of Pepsi and turkey spreadables. . . I feel the the sheer weight of this technology that has come to carry our lives." At the end the porcupine's skin is burned in an age old ritual of respect for the animal that gave its life to nourish other life.
But there lies the rub.  Those rituals are going. The arrival of the new pushes out the old. As Kantner says, "There's a war going on up here on the last frontier." It is a "bitter range war" between the subsistence life of the past and the life brought by the oil and mineral companies, the government, the trophy hunters, and the tourist conglomerates. There is still subsistence of a sort in the rural areas, but even there it has been overrun by technology, snowmobiles, repeating rifles, electric generators, the internet, frozen pizzas, and Wal Mart. The world is out there,  but somehow not the same and definitely not as pure or as holy as it once was.
Throughout there are Kantner's detailed descriptions of arctic life both before and after the arrival of statehood. You get telling accounts of his early life in the sod igloo built by his parents on the bank of the remote Kobruk River. When he fixes on the weather you can feel each new blast of freezing wind and swirling snow. When he hunts you feel with both the predator and the prey. Several chapters serve up bitter winter battles against the sea, the ice, and the snow,  then in a nice balancing act, others take you on flower scented walks over the summer tundra under semingly endless arctic sun.
The world Kantner paints is so distant from the plush cruise ship ethos that surrounds the tourist that I found myself feeling a bit ashamed for daring to tread so comfortably on his holy ground. Ultimately it was a picture of an Alaska that we did not see or feel on our recent trip, except perhaps at isolated moments. It is definitely a side of that gigantic and remote land that needs to be added to every traveler's experience.  This is a book you might wish to read even if you have not just traveled to Alaska.
Posted by DramaJim at 7:17 PM No comments: