Ah Wilderness at the Goodman Theatre 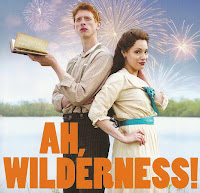 The Goodman Theatre's new production of Eugene O'Neill's Ah Wilderness directed by Steve Scott hits a sweet spot of balance all around.  As the odd comedy out in the work of  Eugene O'Neill it stands alone as a beacon of what kind of family life Eugene might have wished for had he not been cursed with the tortured family we see in works like  Desire Under the Elms andLong Day's Journey Into Night.

The audience enters to see a pleasant blue-sky like screen functioning as the front curtain.  That rises at the opening of each act to expose a full stage scrim that gauzes over our view of the sea front cottage that contains most of the action.  It is this opening visual that  colors our view of the action.   It imparts a slightly misty and nostalgic tone to the innocent world of 1906.  Even without the scrim the earth and sky colors predominate to reinforce that slightly faded sepia memory ambiance.

We then embark on the maturational pains (both literary and sexual) of young Richard Miller played to naive perfection by Niall Cunningham.  The Miller family definitely has problems. There is a father who can't really communicate with his son about sexual matters, an over protective mother, and an uncle who drinks more and more often then he should.  Yet it is not a family that is fully lost to dysfunction and addiction.  The alcoholism that will destroy O'Neill and his real family is here treated with humor.  Love and sex, (which for the real O'Neill was filled with cruelty, divorce, abandonment, and infidelity) is here moderated by sensitive satire and youthful romanticism. Young Richard blunders comically through his first sweetheart and a proverbial prostitute with a semi-heart of gold to come out of his hangover with a reservoir of hope.  The final tableau places his loving parents--arm in arm--gazing at his reclining form on the beach.  There has been some pain, yet lessons have been learned.  The happy ending was certainly not in the future for O'Neill, but clearly it remains the wish of every parent for their offspring.

In sum, director Steve Scott had his finger on every pulse. He guided a uniformly excellent cast of true professionals and backed it up with a visual ambiance that was perfectly attuned to the script. My wife and I loved it.
Posted by DramaJim at 10:14 AM No comments: