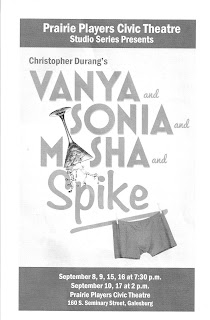 You will want to try and catch the Prairie Players production of Christopher Durang's Vanya and Sonia and Masha and Spike this weekend  in Galesburg.  The Tony award winner for best play in 2013 has been making the amateur rounds for a while now, but this is the first area production I have become aware of.

Durang is most noted for his parodies and scathing satires (Witness his Sister Mary Ignatius)  but this one takes it down a notch. It moderates without eliminating the social darts while adding genial humor, plenty of wild belly laughs, and a helping of true winsome emotion. You do not really need to know your Chekhov, Greek tragedy,  or Tennessee Williams to access the show, yet it does help to bring some of the more delicious moments from The Seagull to the surface.  (i.e. Sonia's  (Kim Wakefield Bullis) constant references to being a "wild turkey."

The cast moved through opening night with a refreshing pace and remarkably few slips in spite of some of the (perhaps too long) 2nd act monologues.   It is there that the play can seem more like a mildly connected groups of set pieces rather than a unified dramatic work.

This is more than made up for by the uniformly well cast ensemble.  I found Vera Fornander's Cassandra to have the most punch. I would love to see her as Madam Arcati in  Noel Coward's Blithe Spirit.   Also appealing was Zachary Lenell Foster's stripper toy boy.  As he did his warm-ups prior to setting out for a run, he reminded me of the similar character type in Edward Albee's The Sandbox

In sum, get on the internet and order your tickets.  You will not regret it.  It is a fine and pleasant evening of live theatre.