Moving on to Christmas 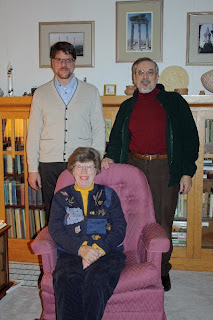 Our son visited from Minneapolis for the holiday and we enjoyed our three days with him immensely.


Thanksgiving is over and the Christmas Season is now formally underway.   The outdoor lights are up and plugged into the timer.  A trip to the local tree farm looms as the next holiday task. We continue to resist the plastic temptaion.  There is something about the smell of a real tree that is hard to give up.
The decorating process itself is also an integral part of the enterprise. We haul the tubs of lights and ornaments down from the attic and then dig the box of Xmas CD's out of the back of the closet. On goes the music and we are off to the races.

With the tree up it is time to survey the gift list and to begin work on our annual Christmas letter.  I know it is easy to poke fun at Christmas letters, but when you look back at a long series of them over the years, you realize that they represent one of the few recorded histories of your family's ups and downs.  If the truth be known it may be more fun for us to read our old letters than for you to real each year's new ones.  So be it.  I have always tried to avoid the over achieving Lake Wobegone Syndrome  by sprinkling our letters with some humor as well as the events of the year.  Given the challenge of finding something to laugh about in this year's economic turmoil, I may have to schedule some special consultation with my elves.  See you soon. 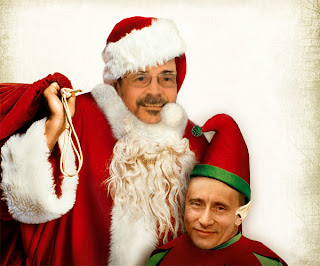 Critic John Lahr in a New Yorker piece on actress Nina Arianda quotes her as saying, "You leave a part of yourself on every stage you're on." Maybe that's why theatre folk wear out so fast. On this Thanksgiving Day I am grateful that there is still enough left to wish all of you a plump turkey and gobs of gravy on your dressing.
Posted by DramaJim at 10:24 AM No comments:

I am not a veteran by luck of time and geography.  My draft board was located in a working class area of Milwaukee that had plenty of volunteers, I drew a high number in the lottery, and educational deferments were easy to get.   I was also too young for Korea and had a wife and family by the time that Viet Nam was heating up.  The result is that I missed the military experience in somewhat the same way that my father missed it.  He was too young for WWI, had a wife and me,  and a job in agriculture (a critical home front industry) as WWII began.  He did note in later years that had the war gone on much longer he would still have been drafted even though he was in his late thirties in 1943.

My conversations over the years with friends and relatives who were vets have given me a sense of an experience lost.  Although many of their stories about life in the service centered on laughable and frustrating moments, the sense of cameraderie they speak of is almost always positive.

So today my hat is off to those who did serve and especially to those who gave the ultimate sacrifice of service like Waterloo, Iowa's now famous Sullivan Brothers.  We visited the veteran's museum dedicated to them this past summeer.  We learned about their story and also prayed that fewer and fewer of our fine young men and women will be faced with a world that requires the particular and peculiar  rite of passage called war. 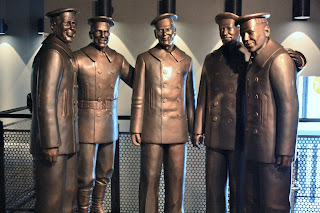 Below my grandson practices his salute. 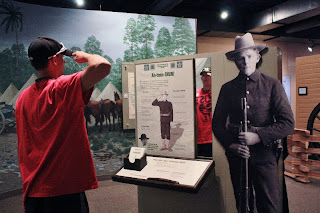 May God bless all those who labor in the cause of peace whether in uniform or out.
Posted by DramaJim at 10:41 AM No comments:

My wife and I visited our son and his new wife in Minneapolis this past week.  The occasion was to get better acquainted with our new daughter in law.  Lotta is from Finland and a resident of Helsinki.  Here she is on the outdoor observation deck of the Foshay tower. 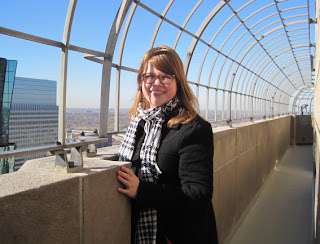 We were proud to show her a bit of downtown Minneapolis and we had a beautifully crisp and sunny late fall day for our touristy travels.  Lotta admires tall buildings and said she particularly liked to go up in them to see the view of a city.  The tallest of the tall in the central city didn't have public observation spaces, but  the venerable Foshay Tower (which can be seen in the reflection on the picture below) does have one.

The tower was completed in 1929 and at 447 feet remained the tallest building in the city for many years.  There is a nice little museum on the floor below the observation deck and it reveals the fascinating and checkered history of the builder.  A major rehabilitation of the structure was completed in 2008 and it now houses a 229 room upscale hotel. 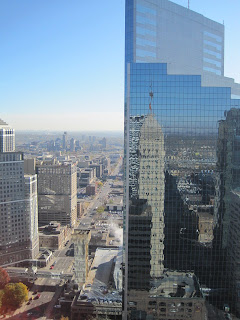 From its open air viewing area you can get a good look at the IDS center, which is now Minneapolis'  tallest building. 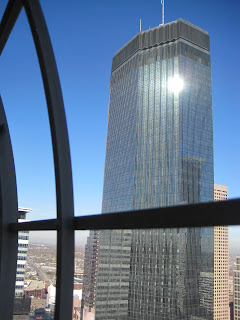 From the Foshay Tower we drove over to the Guthrie Theatre. The stages were dark but the building is a star all by itself and we enjoyed the great views of the Mississippi riverfront from its funky mirrored and colored glass windows as well as the outdoor candilevered porch. 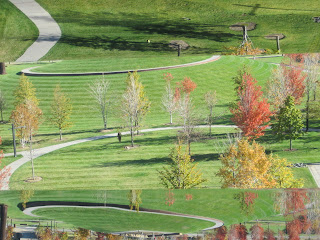 Above is a view through a strange reflected window and below St. Anthony Falls through the tinted yellow lobby glass 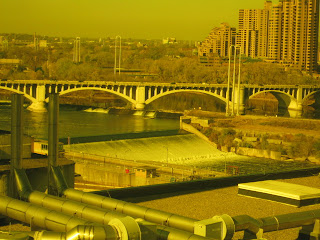 Jan took this picture of Lotta and me on the outdoor cantilevered porch area. 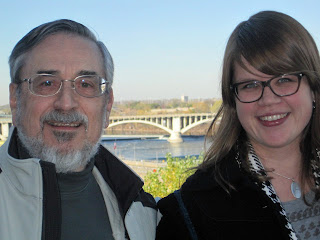 Later in the afteroon we rejoined our son David (who had been at work)  for a stroll around Lake Harriet.  It was late afternoon and the sun was basting all the remaining leaves in shining gold. 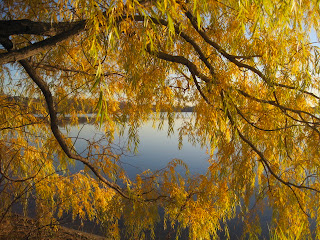 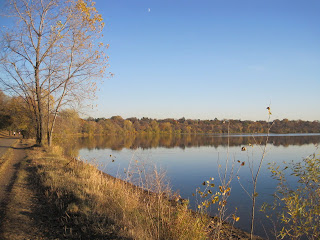 Dining was at Christos, our favorite Greek restaurant and at a Himalayan restaurant near the theatre we attended on Friday night. The play was titled Ajax in Iraq and directed by a Grinnell College grad, Wendy Knox.  I'll put a link up shortly to a review.
Posted by DramaJim at 10:28 PM No comments: