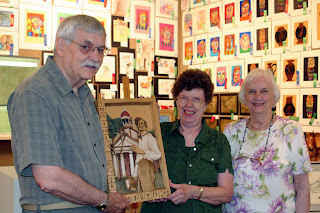 John Ohler a painter, designer, architect, carver, and a publisher of fine embroidery patterns (Puckerbrush Needlework Company), gave the program at the OFTA (Old Friends Talk Arts) meeting in the Buchanan Center for the Arts in Monmouth, IL on Wednesday, May 9th. He displayed a full range of his work in several media and talked about his philosophy of art and the creative process. Ohler, who is seventy-nine years young and still going strong, graduated from Monmouth High School in 1947 and just received a Distinguished Service Award from the Monmouth-Roseville Public Schools. Well represented among the almost fifty people attending his talk were several members of his high school graduating class.

At the end of his remarks Ohler and his wife presented a carving of Abraham Lincoln to the Lincoln Collection at the Warren County Public Library. This collection of Lincoln books and memorabilia was started some years ago by Ralph Whiteman. The gift was formally accepted by Jan De Young, current President of the library board of directors.
Posted by DramaJim at 8:10 PM No comments:

What's the connection between Monmouth, IL, the Minneapolis Star Tribune and the Minneapolis/St. Paul City Pages?
The connection resides in a very special theatre just off Broadway at Monmouth College. Does that sound a bit confusing? Let me enlighten you. Last Tuesday there was be a panel discussion at the Walker Art Center in Minneapolis. Two of the "internet phenoms" on the panel, David de Young and Mike Fotis have Monmouth connections.

Mike Fotis and his partner Joe Bozic, who also graduated from Monmouth, had starring roles in DeYoung's production of Tom Stoppard's ARCADIA when they were in school. A reference to that play now provides the title of Dr. De Young's blog called Stirringthepudding. Things now begin to get a little incestuous. Though Fotis is currently single, Bozic married another Monmouth College graduate, who just happened to be the business manager of the Monmouth College Theatre. She is alluded to in the recent article in the Star Tribune as the social worker who studies kick boxing on the side. It gets worse since Fotis Mike has a younger brother Fotis Matt, who is a budding playwright and also attended Monmouth College and appeared in theatre productions directed by De Young and Wallace. Brother Matt also married a Monmouth grad. She is a nanny and part-time actress, but not as far as I know a student of kick boxing. She just appeared in a play in Chicago called DEVILED EGGS by Nick Ryan--A Minneapolis playwright by the way. That play was directed by her husband Matt. Two other people in that Shantz Theatre cast (Vickie Kunz and Becky Duncan) and the Technical Director (Kyle Anderson), who just married Ms. Duncan last year also have Monmouth College Theatre connections.

Meanwhile in another parallel universe David de Young (who insists on the small "d" as a mark of independence from his Monmouth parents, settled in Minneapolis to do computer work for the Honeywell Corportation. Computers provide the "jack" but David 's long time love has been popular music and five years ago he started a web site called How Was the Show.com that has become a major chronicler of the Twin Cities music scene. David met the Fotis boys when his Mom and Dad came to town to see a play of Matt's that was done, quite successfuly I might add, at the Minneapolis Fringe Festival.

We are now almost to the final connection. Mike Fotis/Joe Bozic of the Brave New Workshop and David de Young of How Was The Show.com are both recipients of a "Best" from the Minneapolis/St. Paul city pages.