I have just finished another trip through classical Rome with via a 2010  historical novel by Steven Saylor titled Empire.  It covers the Roman Emperors from Augustus to Hadrian and is connected to the history of a fictional family named Pinarius.  The original father, Lucius, is an Augur (that’s a kind of prognosticator  who tells the future through various signs from the natural world.  This man has twin sons named Kaseo and Titus, one of whom becomes a Christian and is killed in the arena. The surviving twin has an illicit affair with a vestal virgin and that relationship produces a son who is a sculptor and architect. He has a son who becomes a personal friend of young Marcus Aurelius who will become emperor as the book ends.

I am no judge of the accuracy of the history portrayed, but Saylor has good scholarly credentials and fiction writing chops. He keeps you as involved in the Penarius family fortunes as he does with the Emperors—most of whom (like Tiberius, Caligula, Nero, and Domitian) are a pretty despicable lot.  The machinations, the killings and the sexual deviations definitely keep the pages turning while the Pinarius family provides good lessons on survival while perched on the fringes of power.

Saylor also does a fine job of integrating major historical events into the narrative.  As the years pass you get a nice sense of the destruction of Pompei, the great fire of Rome,  the opening of the Colliseum, and of course the persecution of Christians.

Contemporary relevance can be found by considering conquest and the looting of foreign lands as the path to absolute power and  noting how the casual  acceptance of slavery eased the lives of the privileged and helped build the great monuments of the Empire. Slavery and conquest have certainly evolved in the modern era, but there is enough remaining of both to conclude that the world has changed all too little since the Romans ruled it.

Saylor has also written a novel titled Roma which deals with the Republican period in Rome.

Review of Dictator by Robert Harris 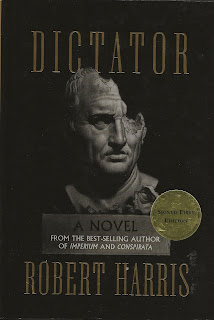 From long ago comes a vivid memory of a Shakespeare Memorial Theatre production of Julius Caesar that my wife and I attended in Stratford Upon Avon.  At the end, dressed in a royal toga,  a victorious and arrogant Octavian (soon to become Augustus) strode out of a center door and advanced purposely downstage.  As the curtain descended he planted his feet at the proscenium and stared imperiously out at the audience.

Dictator, published in 2015, is the third in a series of historical novels about the rise and fall of Republican Rome as seen through the eyes of the Roman politician and orator Cicero. With this year’s Ides of March approaching, I selected this volume from the growing pile of unread volumes on my study file cabinet. My only other experience with Harris was with his Pompei and that was why I picked this one up when I recognized the author’s name. It turned out to be a similar type of novel with a fictional re-creation of historical events underpinned by an incredible amount of background research. I shall now have to accept the fact that my unread pile will get bigger as I will be on the lookout for the first two volumes.

We begin Dictator in 58 B.C. Cicero has been driven into exile by the machinations of his enemies and Julius Caesar is heading off to conquer Gaul.  Tiro, a slave who historically served Cicero as his secretary, is the almost invisible narrator.  “I seem to have been blessed,” he admits, “with the sort of personality that nobody notices.”  This makes him an ideal observer. He is there always but makes minimal moral judgements on the right or wrong of his master’s choices. Meanwhile the main subject in the book is the great game of Roman politics and throughout we get tidy first hand glimpses of Caesar, Brutus, Clodius, Cato, Cassius, Antony, and Octavian. The personal meetings with the great figures are also nicely countered by the fictionally re-created private moments of Cicero’s family life.

You may find the first two thirds of the book a bit too deliberate in pace, but things pick up with the assassination of Caesar. After that the alliances and double crosses come at you faster than a golf ball hit by Bryson DeChambeau.

So who can legally vote?  How can power be transferred peacefully rather than through the trauma of endless wars? How does a citizen follow or interpret a constitution that has both strengths and areas of interpretative difficulty?  How does a citizenry deal with the assertion of unfettered individual power over more democratic governance?

Here Cicero falter a bit.  He says, “The best way for us to show confidence in our institutions is to allow them to function normally and to elect our magistrates as our ancestors taught us in the olden time.”  Unfortunately, quite recently our Democracy has been violently attacked with lies about fraudulent elections and now multiple states are attempting to pass laws that will suppress voting rights for large numbers of citizens. Neither Cicero or Harris was writing about 2020, but that does not means that today’s readers cannot make contemporary connections.

“I have put out my books and now my house has a soul.”  Cicero

Posted by DramaJim at 9:14 PM No comments: