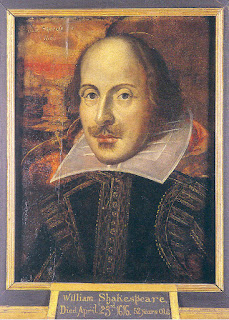 Let me announce at the beginning that some of my less than positive reaction to this show may be due to seeing the original Reduced Shakespeare production  years ago in London.  It is tough to compete with professional British actors whose credentials for sending up Shakespeare are impeccable.

Last night we settled our lawn chairs into the new back patio of Galesburg's Prairie Players Civic Theatre  for an Americanized compendium of the 37 plays in 97 minutes. It was  pretty evidently created by a committee and brought to us by a quartet of  energetic but occasionally overwrought young actors.

Parody and satire present difficult performance challenges and demand a certain amount of subtlety. The temptation is to distrust the material and compensate by adding a flurry of extra business, huge gestures, and high volume. The result last night was a bit too much frantic fuming for me.  I would have liked to see a firmer hand from director, Betsy Hippely.

The opening setup seemed way too long and I was much happier when the real satires began. The triple time coverage of the history plays was especially enjoyable. We bogged down again with a lame long winded segue into the intermission. The program listed a break and I'm not sure there was a need to create an elaborate and corny story to lead into it.  Even if it was written into the script,  I'd be tempted to "abridge" it.


Act II was taken up by various length Hamlets and was quite solid  right up to the inconvenient rain shower that stopped the show and forced us all inside for the last few minutes.

In sum the evening was pleasant and full of energy, but not quite as fulfilling as I would have liked it to be.  Recommendation: Trust the Bard a bit more and pull back a bit on the hokem and helter skelter.
Posted by DramaJim at 5:09 PM No comments: 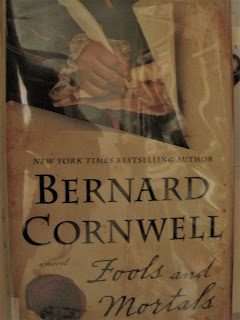 Fools and Mortals by Bernard Cornwell

If you enjoyed Shakespeare in Love, you will definitely find Bernard Cornwell’s Fools and Mortals up your alley. It is a lively theatre themed novel that is full of colorful historical detail and enough action, mystery, and romance to keep you turning the pages right to the end. Cornwell postulates that Shakespeare had a younger brother named Richard who also runs away from Stratford to try his luck in the London theatre. Richard is a fiction, but there was a younger Shakespeare brother named Edmund who was baptized in Stratford in 1580, was an actor, and did die in London. From my London Theatre Walks book I can cite a 1607 Southwark Cathedral sexton’s account ledger that contains the following entry. “Edmund Shakespeare, a player, buried in the church with a forenoon knell of the great bell 20s.”  The critical thing here is the 20 shilling funeral. It cost only two shillings to be buried in Southwark’s churchyard and only one shilling for the tolling of the small bell. Most sources agree that successful playwright, brother William, would have to have been the purchaser of this quite costly funeral.
From these two tiny biographical tidbits, Cornwell builds an entire pageant. His fictional Richard Shakespeare is a part time hired man and small time thief who is trying to get his older brother to move him out of the category of young boy playing women’s roles into better paid and more substantial grown up male roles. As the Bard and his Chamberlain’s Men work frantically to prepare the inaugural production of “A Midsummer Night’s Dream”, young Richard runs afoul of nasty puritans, is accused of stealing playscripts, and finds romance with a nobleman’s young maid servant. It all ends well of course, and while it is going on you can literally breathe in the atmosphere of 16th century London. You will trod the boards at The Theatre, look in on the building of the Swan, feel the threat of Puritan opposition to the players, and participate in the creation of the world’s funniest tragedy, The Most Lamentable Comedy and Most Cruel Death of Pyramus and Thisbe.
You will want to put this book on your summer reading list.

Posted by DramaJim at 8:32 AM No comments: