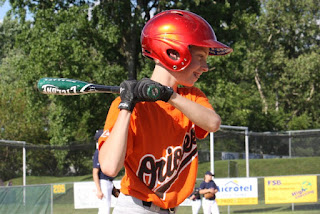 Off on Thursday to see the grandchildren play ball.  The team of the youngest didn't quite have the mustard this time.  The game of the oldest was forfeited when the opponents couldn't field a full team.  No runs, no hits, no errors, no player or fan broke a sweat,  and still a win.  So we were fifty fifty; can't beat that.

While looking at the Skogman Real Estate ad in the Cedar Rapids paper, I was intrigued to note that there were three full pages of pictures of their agents.   Not a single face of color visible.  Hmmmm!

More irony.  We were browsing the CR Barnes and Noble and came upon a display of books advertised as gifts for Dad on Fathers Day.  Every single volume on the table was about war or weapons.   HMMMMM!   The caps mean Hmmmm intensified.

Home on Saturday to do a two hour stint at our local history museum and then on Sunday up to the Quad City Music Guild's production  of Cabaret.  Playing Sally Bowles was former student Melissa Anderson-Clark.  I am most proud when those young people continue to do theatre after they leave college.  Art as a key part of life exemplfies the core of the liberal arts experience.  And in addition both of her children are active in performance.  To top if off her dad, a successful MD and also a Monmouth College grad, participates in theatre as well.   Kudos to a remarkable family giving back to the Quad Cities.

Need a read?    A challenging article in the May 20th New Yorker is titled "The Ivy League's Online Push."  It explores in some depth both the potential strengths and weaknesses of  formal internet education.    It moves us to consider once again the mystery of education.  Why do some students remember a moment in a classroom years before as a deciding path in their lives and some find difficulty in stopping the moment for even a second before it passes out of the other ear unfettered by thought or consideration?   Does the fact that Zuckerberg and Gates dropped out of college demonstrate that their  education was a success or a failure?   Check it out.  As the author, Nathan Heller, notes: ". . . the mechanism by which conveyed knowledge blooms into an education" may "either enrich teaching in this country or deplete it."  Now if we can just understand the mystery of the mechanism.

Need a longer and more theatrical read?  Try Priya Parmar's EXIT THE ACTRESS.  I guess I would call it bio-fiction.  It pretty accurately chronicles the life of famed Restoration actress Ellen "Nell" Gwyn, but it is couched in the form of a diary, which as far as we know, Nell never wrote.

Now on to deeper things like the sand trap behind number two at Gibson Woods.

Posted by DramaJim at 9:04 AM No comments:

A Little Breakfast Aubade from the Professorial Side of the Desk


A Little Breakfast Aubade from the Professorial Side of the Desk


An aubade is an ancient French word meaning “dawn song” or a song composed to be sung in the morning.  You can be comforted that I will not sing to you this morning.  Instead I’ll simply say a few brief words about my love affair with Monmouth College and liberal arts education.


I first heard the word “aubade” at Beloit College in 1950’s when my mentor and head of the theatre department, Kirk Denmark, used it in a talk he gave at a morning convocation. The second time I used the word was in a speech I gave to our student body in the 1980’s at our Spring Honors Convocation.  This is the third time. (It’s not a word you can find an excuse to use very often.)  And now former Speech 101 students, on to the body of the talk.


About two weeks ago a former student, now in a graduate program in Texas, wrote to me:  "If it weren’t for you, I most likely never would have discovered theatre. Thank you, Doc, for playing such a pivotal and supportive role in helping to shape my life. I look forward to sharing a Guinness with you when I add Dr. to my name. :)"


I mention this not to aggrandize myself but to remind all of us that there is always someone who came before.


For me it was my parents and it was in their honor that I made my small gift to Monmouth. Neither of them had a college degree.  My mom graduated from high school and went directly to work.  My dad had a tougher task. He had to leave high school after two years in order to help support a family whose father was away fighting in WW I.

In later years, my parents were both determined that their children would get the educational opportunities that they never were able to have.  And both of their children became first generation college graduates just as did many Monmouth graduates over the years.
As a matter of fact, our family could qualify as ACM (Associated Colleges of the Midwest) poster children.  I went to Beloit College because my uncle went there.  My wife and I graduated from Beloit. My sister and her husband graduated from Coe College and they lived in Ripon for a time while my brother-in-law taught there. My son graduated from Grinnell and my daughter has both a BA and Master of Arts in Teaching from Coe.  And of course I taught here at Monmouth for thirty nine years. We must clearly have seen some value in a liberal arts education.


One of the most important things we learned in those years of attending or serving at small colleges was that giving back, in the measure you can afford, is a part of life.  For me “the give” was to the theatre program at Monmouth; for you no doubt, something else equally important.


But whether your motivation was a discipline, a professor, or the liberal arts concept itself, it is all summed up beautifully in Alan Bennett’s remarkable play THE HISTORY BOYS. Hector, the elderly teacher says at the end:


“Pass the parcel. That’s sometimes all you can do. Take it, feel it, and pass it on. Not for me, not for you, but for someone, somewhere, one day. Pass it on, boys.  That’s the game I wanted you to learn. Pass it on.”


This was a brief talk delivered by Dr. Jim De Young. Professor Emeritus of Communication and Theatre Arts at the McMichael Heritage Society Breakfast on the Monmouth College Campus on June 8, 2013
The McMichael Heritage society honors people who have given substantial gifts in a year, made estate gifts, and employees with more than twenty-five years of service to the college.

The Wells Theatre was dedicated in 1990 and De Young Theatre Arts Education Fund honors
Dr. De Young's parents and will help fund guest theatre artists on campus and defray travel costs for current to off-campus theatre arts events. If you wish to add to this fund, contact Mr. Steve Bloomer, Director of Principal Gifts at Monmouth College, Monmouth, IL 61462 or email him at sbloomer@monmouthcollege.edu 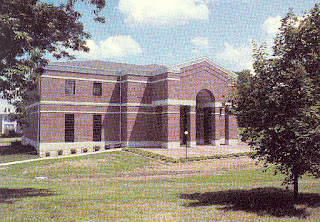