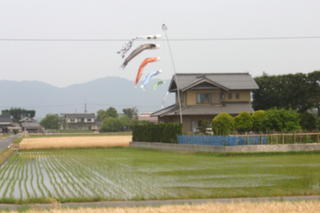 We are now breathing more easily again as the 100 degree heat and high humidity has moved westward leaving us with two fine days of pleasant golfing weather. Work is progressing on the Japan slides. We'll whet your appetite a bit below. When you see those kites flying around a Japanese home, it means that there are sons in the family. One difference from the midwest is that most fields are quite small. You can see a fairly large rice paddy here, surrounded by fairly small wheat plots. Rice paddies actually come in many sizes. Not too many are larger than this and often they are barely the size of a modest garden.
Posted by DramaJim at 3:57 PM No comments:

Hades might be cooler than the midwest this weekend. The so called heat index hit 110 here today. Other than to get a paper, it has been an indoor scene. We ventured out last night to see the Coffee Bean Theatre's production of Ken Ludwig's Moon over Buffalo. It was done in our old downtown movie house. Coffee Bean is primarily populated with Galesburg people and they give it the old energetic community theatre try. There is plenty of mugging, and tons of shouting, falling down, and slamming doors. The show doesn't have near the charm of Lend Me a Tenor with a good deal of the humor depending on not so politically correct laghter at falling down drunks and deaf old ladies. But the energy is there and live theatre beats a movie or video hands down. At ten bucks it was a pleasant evening.
Posted by DramaJim at 6:59 PM No comments: 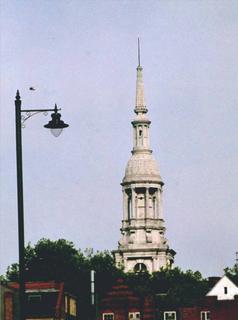 I may have to stop turning on CNN when I come down to make the coffee in the morning. My first image today came from a hovering helicopter high over the east end. There was the spire of the church of St. Leonard Shoreditch floating by to focus in on a red bus parked in the Hackney Road. Having lived quite near to Tavistock Square, the site of the bus explosion two weeks ago, I was jolted again by another familiar site. St. Leonard's is the endpoint of Walk No. 8 in my book of London Theatre History Walks. It has a magnificent spire 192 feet high that can be seen from quite a distance. In the old church on this site several major actors and playwrights of Shakespeare's time were buried, including the great theatre owner James Burbage and the great actor Richard Burbage. We are most thankful that this latest rash of violence has not been as vicious as the last one.
Posted by DramaJim at 4:06 PM No comments:

The city of London is in many ways my 2nd home. I was born in Milwaukee; I have lived in Monmouth for forty years; but my creative heart lies in London and its glorious theatre. Luck and perseverence has placed me in that city fourteen times over the years and some of the visits have been for extended periods. I was a bit too young to experience the blitz, but my visits have coincided with IRA bombings on at least three occasions. I have never been harmed, but do know the feelings of helplessness and the tremors of fear that one feels when entering one of those long tube escalators or when a train is evacuated because of a bomb scare.

To think that there are animals so callous that they give "animal" a bad name gives one a pause. Animals do not kill wantonly; only humans do that.

My son, not me, was in England this time. He was on a train bound from Stanstead Airport to London's Liverpool Street Station on Thurs. morning. It was stopped and turned back. If you wish to read his entire experience go to http://www.HowWasTheShow.blogspot.com and read the whole story.

My little memory is that on three different occasions my wife and I have stayed at the Endsleigh Court Flats on Upper Woburn Place. This is just about where the bus was bombed and a friend of mine, who has an office on the other side of Russell Sq. has mailed me to say that there was blood staining the front of the British Medical Association Building, which is kitty corner across the street from the Endsleigh. I have walked the street from Russell Sq. to Euston countless times and often paused for a time in Tavistock Square, where the statue of Mahatma Ghandi makes a plea for non violent protest. As his life was taken by violence so shall this square now also be known for its nearness to carnage rather than peace and love.

These are sad times. The picture accompanying this report shows me in a happier state in 2004 when Jan and I stayed at the Russell Hotel just a few minutes away from Tavistock Sq.
Posted by DramaJim at 11:56 AM No comments: 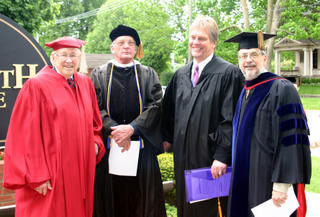 Posted by DramaJim at 2:40 PM No comments:

Today is the birthday of Tom Stoppard. A quote from his play "Arcadia" provides the title of this blog. Happy Birthday Tom! Another line of his that I have on a t-shirt is "It's wanting to know that makes us different."

But Catching Up is the title here. So let's go back to the 15th of May for the Monmouth College graduation. A former student of mine, one of the founders of MTV and now a Vice President of Viacom for European Operations, Dwight Tierney, delivered the commencement address. Yours truly and another old professor of Dwight's from the 1970's, Tom Fernandez, were there to celebrate with him. Tierney's address was tagged for re-broadcast on C-Span a week ago. I didn't see it, but wonder if his last line was censored. It went down well with the grads, but some of the older folks felt it crossed the language line when he uttered his concluding recommendation of "Don't take shit from anyone."

Another good line from the speech came as he was telling about his involvement in the founding of MTV. As he described it, the little group of original creators had a philosophy that could be summed up as, "If it's not broke, break it and see what happens." What happened in this case was a shattering of the mold of what was then thought of as successful TV programming.
Posted by DramaJim at 11:56 AM No comments: