Once upon a time, when the Salt River ran down out of the mountains and into the valley that now holds the thriving city of Phoenix, the ancient Hohokam built an extraordinary complex of villages tied together by a large series of irrigation canals.  Pueblo Grande (large village or town) was one of the central settlements in the valley.  It is located near the present day Sky Harbor Airport and the planes seem to be tracking across your field of vision constantly as you walk in the compound. Pueblo Grande is not only right in the city, but it is a practical size to explore.  It has been carefully excavated and restored and there is a modern air conditioned museum, shop, and theatre to retire to if the heat becomes a bit too much.

The trail out from the museum leads you around the base of the football field sized platform mound, which dates to around 1450 ACE. It was probably the ceremonial and administrative center of the community. 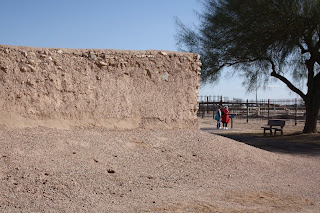 You then circle out to a later adobe Hohokam house replica from about 1300 ACE. 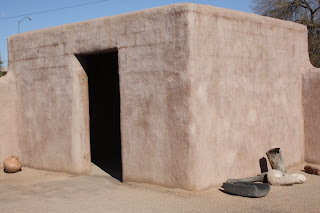 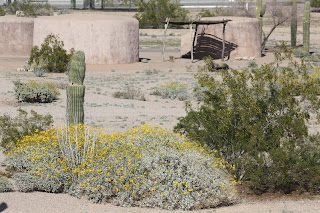 A close up shows their low entrance area. 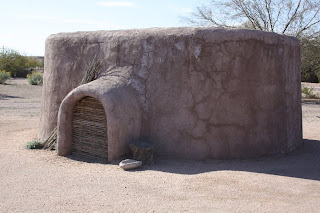 From there you curve past an excavated ball court that was used from around 750 ACE to 1200 ACE.  There are many of these in Mexico but not many in the American Southwest. 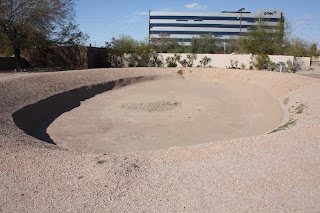 Then you pass a small garden plot that is used to demonstrate Hohokam irrigation methods. Note the stone used to block the flow when enough water had passed into that section. 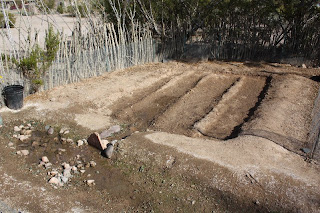 where you can survey the entire village 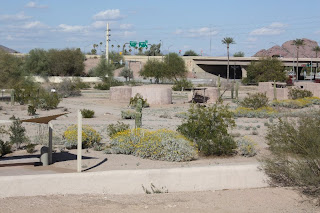 A painting inside the museum gives you an excellent idea of how the whole complex might have looked in its heyday.  You can see the Salt River flowing in the background. 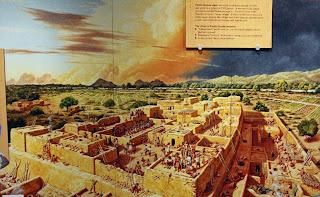 Today on the top of the mound you can only see some of the outlines of ancient rooms and storage areas. 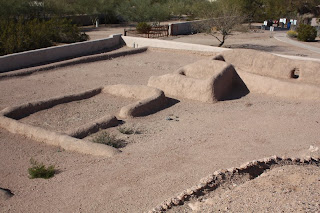 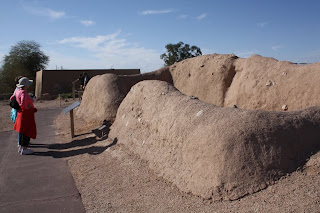 When you are finished with your walk you can return to comfort of the museum to cool off a bit before returning to your car. 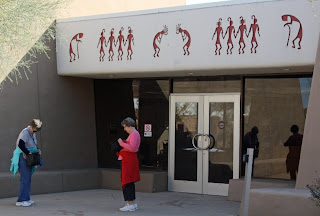 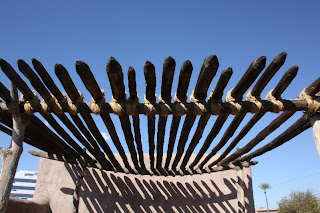 Posted by DramaJim at 3:52 PM No comments:

Nothing in the world is more dangerous than sincere ignorance and conscientious stupidity. -Martin Luther King Jr.
“The American public is suffering from an education deficit. By this I mean it exhibits a growing inability to think critically, question authority, be reflective, weigh evidence, discriminate between reasoned arguments and opinions, listen across differences and engage the mutually informing relationship between private problems and broader public issues. This growing political and cultural illiteracy is not merely a problem of the individual, one that points to simple ignorance. It is a collective and social problem that goes to the heart of the increasing attack on democratic public spheres and supportive public institutions that promote analytical capacities, thoughtful exchange and a willingness to view knowledge as a resource for informed modes of individual and social agency.” This is the opening of a long article by Henry Giroux. http://truth-out.org/opinion/item/9865-beyond-the-politics-of-the-big-lie-the-education-deficit-and-the-new-authoritarianism
I don’t agree with all of his later points, but I am a strong believer in the fact that the more we incessantly and vilely trash the only institutions we have in our “representative” democracy the worse off we all become. When intelligent people cannot differenciate between undocumented poisonous diatribes and fully supported and reasoned argument, we are doomed to follow the path of ignorance. I have no problem with policy disagreements that challenge authority or the status quo, but when the disagreement constantly starts with the supposition that the other side must be “criminal” and is pursuing some kind of evil agenda instead of a different agenda, I feel the necessity to back off and ask the kind of questions I was taught when I was studying Aristotle’s Rhetoric way way back in the dark days.
i.e. Who are you and what is your reputation as a purveyor of truth? What evidence do you cite or use to prove that your assertions are valid? What is the reputation of the sources you cite? What percentage of your argument hinges on emotional flames like name-calling, racist insinuation, fear mongering, blatant untruth, etc. How do you or do you answer or rebut any opposing arguments?
The fact that your grandmother says it or that some news source or book says it does not prove it true. Only a compilation of multiple sources followed by some kind of reasoned assessment of probability gets you toward the final answer. And only some kind of compromise may allow you to move toward a solution that will contain a little bit for both sides in a complex and perhaps ultimately unsolvable issue like “What is the best way to deliver the best possible medical care to the most possible people in your country?” Some facts are undeniable. Several other civilized industrial countries have statistically lower infant death rates, less obesity, and higher life spans with a different system of healthcare administration. Do we adopt their systems whole cloth? Not at all.   Do we look at what they are doing and try to get better results for us with some tinkering? Yes. If we don’t we are ignorant and foolish and do not have the best interests of our country’s citizens at heart.
Posted by DramaJim at 9:36 AM No comments:

A bit of theatrical trivia from Darren Dalglish.

"Agatha Christie's long running thriller The Mousetrap, has extended its booking period and is now selling tickets through to 21 Dec 2013 at the St Martin's Theatre. Directed by David Turner, The Mousetrap's plot is one of the West End's best-kept secrets, and audiences are requested to keep the identity of the killer locked in their hearts. A group of people gathered together in a remote part of the countryside discover there is a murderer in their midst. The question is which one of them is the guilty party. Originally written as a radio play, the world's longest running play has now chalked up over 23 ,000 performances."

Chris Hayes "Up" this morning was talking about how the current political ties to Wall Street, which essentially ensures that a bailout will occur if you screw things up,  encourages wild speculation and cheating.   Question? Does this in education policy?  The transfer of teacher employment from a seniority driven system to a defined merit driven system puts a premium on meeting short term external requirements that demonstrate that you are doing your job.  Knowing that this drives your advancement and pay,  encourages you to do things that make you look good on the short term requirements in spite of the fact that most good and dedicated teachers feel that the success of teaching may only be measureable in the long term.    We are now beginning to see whole school systems being accused of trying to fix the results in some way in order to look better.   When assessment and control seems inneffective, misplaced or crazy then it becomes easier to justify fudging the system.

Am wrestling with this.

Will be fun to see how the Republicans will react to Obama's new immigration policies.
Romney is characterized as principled by his base for finally seeing the light and reversing his positions on abortion and medical insurance.   Willl Obama be seen as principled for doing the "right thing" in order to secure more support from his base?   I would be willing to bet not.

Is the incipient racism of the last three main examples of rude interruptions of the first Aftrican American  pesident by far right figures not to be discussed?     Liar by a far right congressman,  finger wagging in face by a right wing govenor, and a conservative newsman's interruption of a news conference while the president was still speaking and had not called for questions.
Posted by DramaJim at 9:58 AM 2 comments: