"Journey Stories" Opens at the Buchanan Center for the Arts. 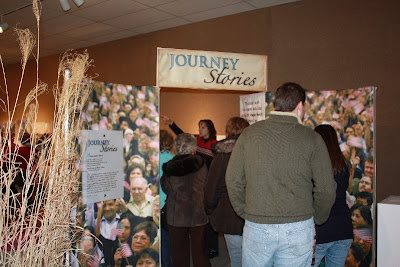 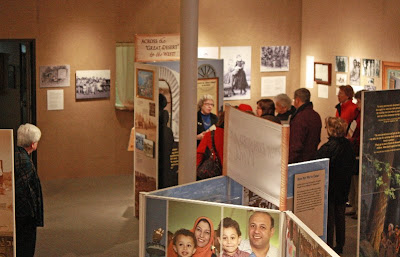 Over a year ago Larisa Good, director of the Warren County Public Library and Susan Twomey, director of the Buchanan Center for the Arts wrote a successful grant to get a Smithsonian Institution Exhibition titled “Journey Stories.” On Saturday, January 30th, 2010, the exhibition opened to a standing room only crowd of over 120 people. 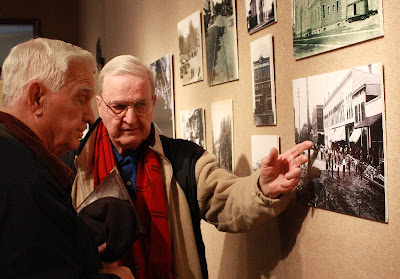 "Journey Stories” is part of the Museum on Main Street project of the Smithsonian Institution and the Federation of State Humanities Councils. The project creates special exhibitions for communities under 30,000 population and the Monmouth stop is one of only six locations in the state of Illinois where it can be seen. The show will run at the Buchanan Center for the Arts on the main square of Monmouth, IL from January 30-March 14. More information can be found at the BCA web site or the Warren County Public Library web site. 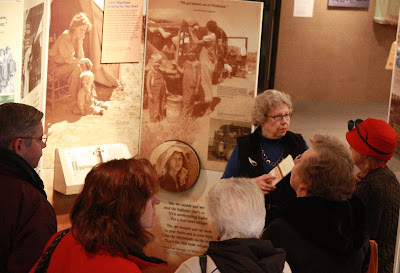 The main exhibit is comprised of six multi-fold panels that combine text, pictures, objects, and sound. Around the perimeter local venues contribute displays keyed to the development of their own communities. There is no charge for admission and visitors can proceed on their own or get a brief docent led introduction. Either way the story of how transportation contributed to the development of the United States is freshly displayed. The specific focus is on people and their mobility through time both around the continent and on the socio/economic scale. You will see and hear how their personal stories helped create the country and the society we have today.
The Monmouth opening was headlined by three distinguished guests. Mr. William Withuhn, the Smithsonian Curator of the Exhibition, came all the way from Washington DC. to participate. His presentation covered the genesis of the "Journey Stories" project and emphacized the major national trends of immigration and westward expansion. Prof. Dennis Crimin, an Illinois Humanities Council state scholars for the Main Street project, talked about how state and local populations reflected national trends. Pat Miller, the Executive Director ofthe Illinois Heritage Association, was also in attendance and conducted two docent training sessions. All of the guests publicly congratulated the Monmouth organizers for their mounting of the local components of the exhibit and the planning of the month long series of programs that will accompany it. We will cover some of those programs in later articles. 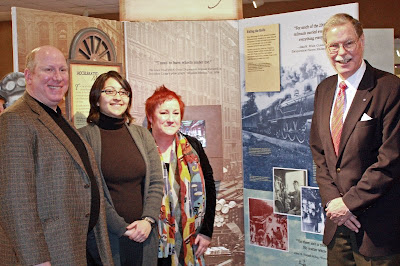 Pictured above in front of one of the exhibit panels are Dennis Crimin, Illinois State Road Scholar, Larisa Good, Director of the Warren County Library, Susan Twomey, Executive Director of the Buchanan Center for the Arts, and William Withuhn, of the Smithsonian Insitution's Museum of Natural History.

More pictures of the opening can be seen and even ordered at my Flickr site.

Posted by DramaJim at 6:29 PM No comments:

The State of the Onion

Last evening the members of congress proved conclusively that they were capable of multiple pop ups and pop downs--though Republicans clearly have somewhat stiffer knees than Democrats. If only our legislator's ability to move horizontally through problems were as good or as frequent as their vertical leaps to applaud. The Democrats, with a huge majority on paper, remain so fractured that movement appears impossible. In spite of their protestations to the contrary, the Republicans seem committed to the proposition that blocking all movement is the best way to inherit another chance to do nothing after the next election. Everyone agrees we have problems yet nobody will give anybody an inch toward solving them for fear that the inch will give a political leg up. The guaranteed loser in all of this is the people.

Hmmmmm!
Posted by DramaJim at 8:48 AM No comments:

It's been a long slow slog since Thanksgiving. The weather here has been putrid; my wife has had health problems; Haiti has been destroyed, and the political and economic climate continues to fester. Nothing seems to function on a macro level.

You turn to micro local accomplishments to keep your sanity. Yesterday I managed to get a new under the counter light installed in the kitchen and fix a drawer in the study that had a broken track. Both of these items had been waiting for completion for some time. Now they can be filed in the completed bin. There is something nice about the relaxed exhalation that accompanies the end of a small task long posponed.

We heard a fine lecture on Martin Luther King by Joe Angotti (a former NBC news VP) at the college. Strange how the old clips of the Cicero riots of 1968 seemed to have the same people in them as those who populate some of the "Tea Party" rallies. They haven't aged a bit or maybe their kids have simply taken up the cause. King was a commie and provocateur who did not know his place they shouted; the new guy is labeled a Socialist, not even an American, and a consorter with terrorists. The common thread then and now seems to be a virulent uncompromising hatred of the man himself as much as his racial identity. These folks don't just seem to believe that the path of their enemy is wrong or that he is mistaken; they find malevolence in his intent.

To cool down we had a glass of wine with the Blums at the Barnstormer while listening to the duo called Surprizingly Hip. Apparently we got too cool because today we are totally iced in with the lights flickering forebodingly every once in a while. Started The Unbearable Lightness of Scones by Andrew McCall-Smith. That is always good for the equilibrium. Small and local with spot on observations about life and love on almost every page. McCall-Smith is a retired medical doctor. I wonder if he were a banker would he have titled the book the Unbearable Tightness of Loans.
Posted by DramaJim at 7:29 PM 1 comment: