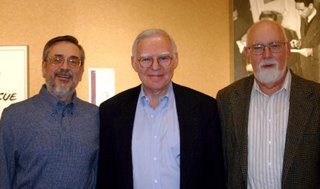 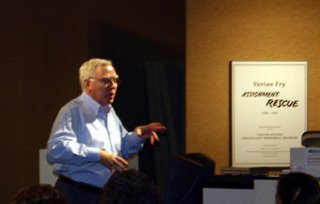 OFTA HOSTS HOLOCAUST SURVIVOR OCTOBER 11th
An audience of almost fifty, including a group of young people from a local school, were held entranced for over an hour this morning at the Buchanan Center for the Arts on the square in downtown Monmouth, Il.

Ralph Rehbock and his mother were in a hotel in Berlin on the night of November 9, 1938 waiting for transportation out of Germany to the United States. On that evening, now known as “Kristallinacht” or “The Night of Broken Glass” hundreds of Nazis roamed the streets killing dozens of Jews and destroying synagogues, Jewish businesses and Jewish homes. Mr. Rehbock did a masterful job of explaining the rise of Hitler to power in Germany and then told how he and his mother escaped from Germany by rail with the help of an unidentified stranger. He closed by emphasizing that each person has the duty to speak up and do the right thing when they perceive wrong things happening. When too many turn the other way in the face of clear wrongs, tragedies like the Holocaust can easily occur.

Rehbock and his family re-settled in the Chicago area and he is currently the chairman of the speakers bureau for the Holocaust Memorial Foundation of Illinois. He has spoken extensively about his experiences and the lessons of the Holocaust throughout the state.
Posted by DramaJim at 11:06 AM