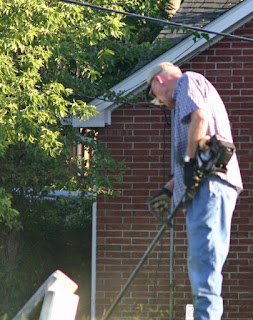 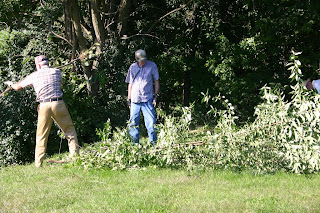 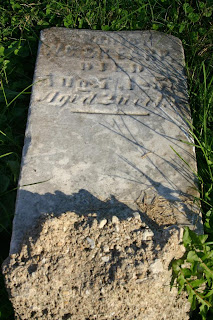 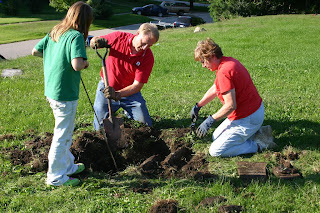 The newly formed Prairieland Historical Society had it’s second workday at the Warren County Pioneer Cemetery on Thursday, September 18th. More brush was cleared on the north side of the cemetery, grass was trimmed around some of the visible tombstones, and work was begun to expose some of the stones that have become buried over the years. One interesting stone that was uncovered appeared to be that of the two week old daughter of an uncle of Wyatt Earp.

The cemetery sign is also being refurbished and sometime this fall will be re-located near the stairs that lead up to the historical kiosk.

The Prairieland Historical Association meets regularly on the 2nd Thursday of each month. Memberships are available at a cost of $15 for an individual and $20 for a family. Contact this blogger or Fred Jenks, the current president, at 309-734-2116 for further information.
Posted by DramaJim at 9:06 AM