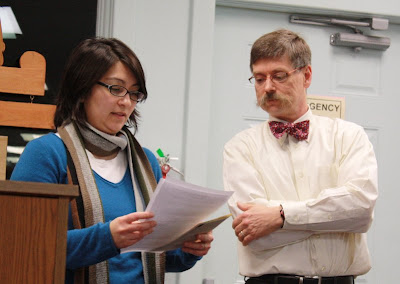 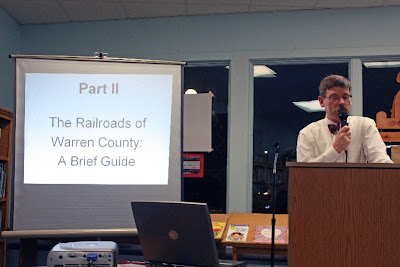 We learned a good deal about trains last week in a fine lecture by Monmouth College history professor and Illinois Road Scholar, Simon Cortery. The talk was one of several special events scheduled around the Smithsonian "Journey Stories" exhibition now on view at the Buchanan Center for the Arts in Monmouth, Illinois.

A standing room only crowd of over 120 wedged itself into the children's room at the Warren County Library to get acquainted with the development of railroads in the state of Illinois. There were plenty of names and dates for the notetakers in the audience, but suffice it to say that the main point of how the railroads juiced the population growth of the state was clear to all. By the end of the first third of the 20th century, said Cortery, every farmer was no more than five miles away from a rail line.

The seminal line was the Illinois Central and its name came because it went north-south right down the center of the state (with a key spur that connected it to a sleepy little port town called Chicago). It was seminal because it literally helped to populate the state and William Douglas of Lincoln-Douglas fame was politically instrumental in making it happen. His debating partner, Lincoln, was also involved in the railroad enterprise. According to Cortery Lincoln's biggest paycheck came from winning a railroad case. The irony was that Lincoln had to turn around and sue the railroad to get his pay.

Corery also talked about the rise of passenger service, particularly the electrified interurban lines that connected smaller towns like Monmouth and Galesburg. My wife's mother talked about traveling to Monmouth from Peoria on one of them in the 1920's. On the Monmouth-Roseville run, which was too low traffic for a regular train, there were apparently single car gasoline or diesel powered carriages called Doodlebugs. One member of our audience talked about riding on one with his grandmother when he was a boy.

And did you know that the phone company, SPRINT, was actually a spin off from the Southern Pacific RR. Sprint is an acronym for Southern Pacific Railroad Intelligent Network of Telecommunications. Read the details at this link.
The "Journey Stories" exhibition will run until March 14th. Full program details can be found at the Buchanan Center web site or the Warren County Public Library web site. Coming next week is a showing of the film "El Norte" at Monmouth College (Dahl Chapel) at 7 PM on Feb. 9th and a session for seniors on "Writing Your Own Journey Story" at the Warren County Library at 10 AM on Feb. 10th. 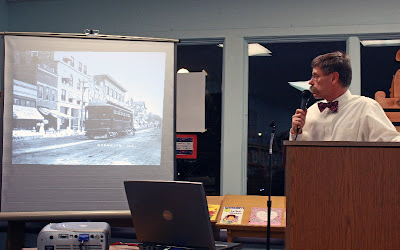