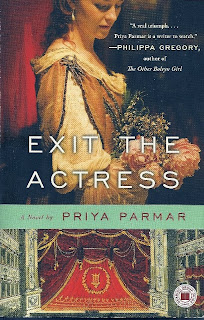 Exit the Actress is a first novel by Priya Parmar, a young woman with roots in English Literature and the Theatre. It recounts the life of the 17th century Restoration actress Nell (Ellen) Gynn via a sequence of fictional diary entries and a series of gossipy news items, letters from royalty, and even period recipes for food and medicines.  Nell is portrayed as an independent woman who will play by her own rules and not those of the men around her. She lives out her unmarried life as the mistress of three different Charles', but is faithful to each in his time. Above all she is adamant about not being kept and continues to insist on control of her living space and her professional life in the theatre.

The diary format tends to diminish the tension somewhat as the conflicts are narrated rather than dramatized, but the theatre buff will still be caught up in the Restoration ambiance and the treatment of familiar stage figures such as Thomas Killigrew, John Dryden, and the third Charles, King Charles II of England. At over 400 pages of smallish print, you will not be polishing this off in an afternoon at the beach, but I think you will find Ms. Parmar's take on Nell quite endearing and somewhat different from some of the more salacious takes on her life.