Our first walk outside of the parameters of the Marriott was with a guide named Sonya. She was full of spirit and had a fluent command of English.  All of our guides on this trip were using the new radio technology that gives each person an earpiece. That means the guide doesn't have to shout above street noise and other groups around you. Plus it is somewhat less bothersome for locals who are just going about their business. 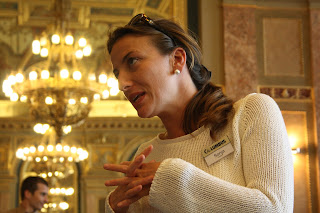 Our route took us past the Vigoda Terrace Garden and its Music Hall where we had seen the tango dancers last night. Then through (Deak ter)-- a square full of delightful outdoor cafes.  The US has tried valiantly to imitate this common European restaurant tradition, but mostly falls short because dining and drinking establishments are generally located on traffic heavy streets with narrow sidewalk frontages. The several hundred year old continental architectural pattern, which is based on squares and heavy pedestrian use, is far more ideal for leisurely sits to watch the life of a city unfold while enjoying a cool drink or a pleasant meal. 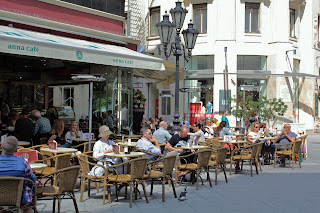 Another famous cafe--the Cafe Gerbeaud-- was passed in Vorosmarty Square.  Sonja described it as the classic Budapestean Coffee House. 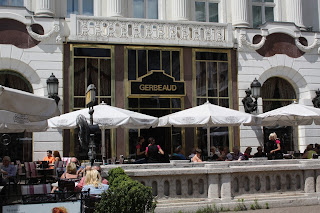 From there we ambled into Erzsebet  Square. This was a busy green space full of locals and tourists. In one corner a skateboard competition was going on. Other folks were crowded around the ferris wheel.  Not quite the London Eye or even Navy Pier, but still a bit of  carnival in the middle of a busy city. 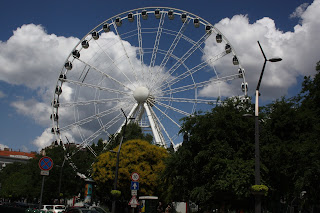 If a refreshing ferris wheel ride is not for you on a warm sunny day a splash of cool water from the fountain at the square's center will work just as well. 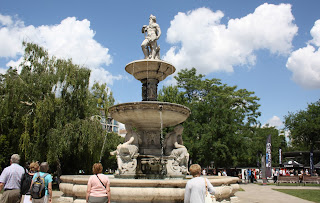 Our stroll got a bit more serious as we entered the courtyard in front of  St. Stephens Basilica--the 2nd largest Catholic church in Hungary.   Plagued by a faulty start in 1851 that resulted in the total collapse of the original dome, the Neo-Rennaissance building now before us was finally completed in 1906. 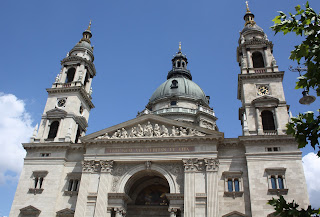 The interior is decorated with multiple kinds of Italian marble and the high altar is unusual as it has a St. Stephen figure above it rather than the more usual  cross. 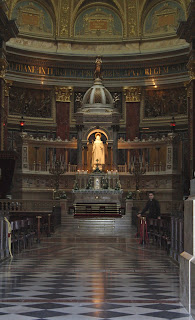 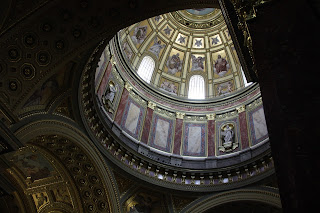 As beautiful as the main chancel is, the key sight for pilgrims is in a small chapel around to the side.  Here you can see a handsome gold and silver reliquary containing the brown mummified hand of Saint Stephen, Hungary's first Catholic monarch. 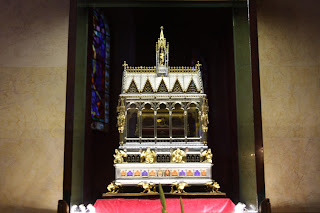 Just a tad on the gross side but interesting all the same.   The reliquary is carried in a procession outside the church honoring the Saint once each year.

After the encounter with St. Stephen's hand we entered Andrassy Avenue proper and made our way toward another Neo Rennaissance masterpiece-- the Budapest Opera House (1884), which incidentally was designed by Miklos Ybl, the same man who was brought in to finish St. Stephen's Basilica after the dome of the first iteration collapsed. 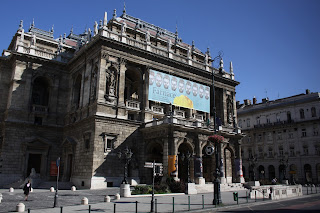 The Budapest Opera House is a splendid hall seating over 1200 and graced by a chandelier and ceiling frescoes that would fill the Phantom of the Opera with envy.  No performance this afternoon but the place was full of tour groups from several countries. 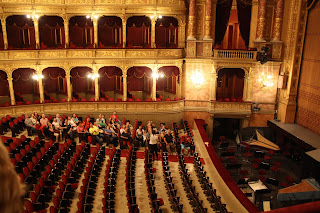 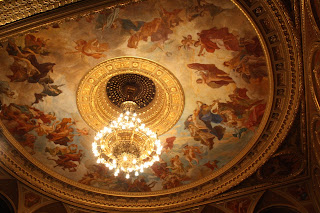 The Grand Staircase is grand indeed and 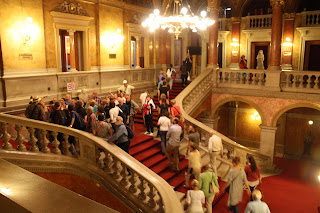 this set of stairs reminded me of a similar one at the Hermitage in St. Petersburg 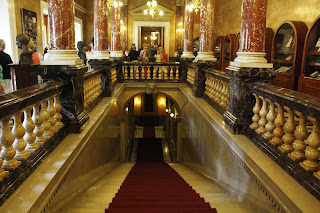 The highlight of our tour was a gathering of all the groups in one of the front lounges to hear an opera singer belt out an aria or two.  He started with a sure crowd pleaser, the toreador song from  Bizet's Carmen. 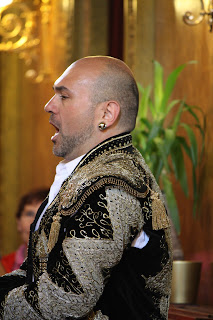 A final stop for the day was at the end of Andrassy Avenue as it opens out onto the gigantic Heroes Square where all the great Hungarian heroes are honored.  At the center is a column with a figure of the angel Gabriel on top.  The Hungarian Tomb of the Unknown is at the base of the column and the colonnade at the rear contains massive statues of  other national heroes. 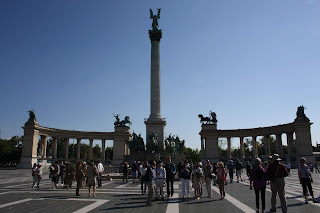 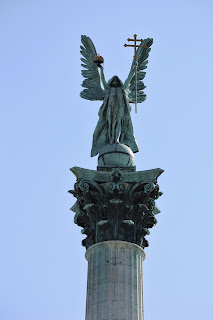 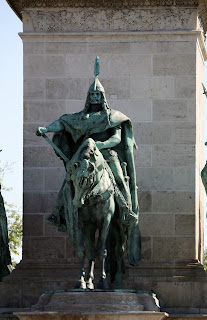 Around the periphery of the square are two large museums including this colorful Neoclassic structure called the Museum of Fine Arts. 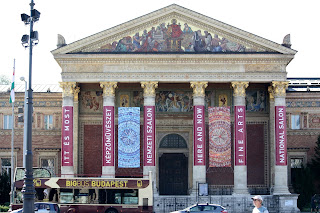 With high culture finished for the day, it was a short walk for some refreshment at the Lotz Coffee House and Bookstore.  You enter a nice modern space looking pretty much like a big Barnes and Noble and wonder why you are being taken here.  Then it's onto the escalator and suddenly into the  former grand hall of a long gone department store. 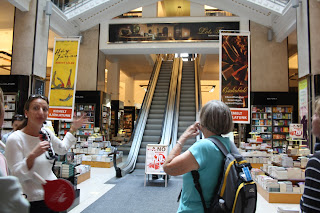 What a surprise!  Baroque again with ceiling frescoes done by the same artist who decorated the  Opera House. 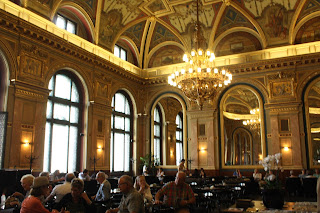 The beauty extended to the food and our party eagerly dug into the fancy pastries after a long afternoon of walking. 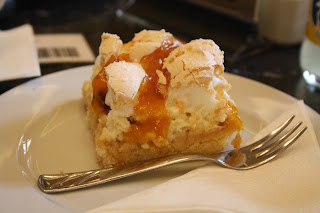 With our sweet tooth satisfied we had a quick ride on the Budapest subway back to our hotel.  After a shower and rest we had a gin and tonic in the hotel bar and then headed out for dinner. It was classic Hungarian at an outdoor café.  I had a goulash soup and veal lasagne. Jan had chicken paprika and gnocchi.  Both were washed down with ample beakers of a local draft pilsner.  Dessert was secured from a gelato stand and consumed while strolling back to the hotel.

I'll bet you can't wait until tomorrow to see where we go next since it has been almost a year since we made this trip.  Here's a hint.  We will take a tour into the countryside before boarding our cruise ship at around 4 in the afternoon.