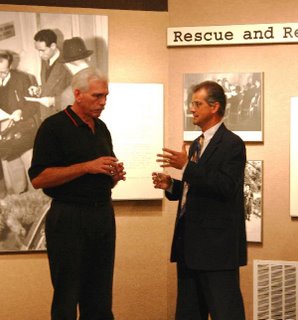 In his book titled SURRENDER ON DEMAND the American journalist Varian Fry cites a conversation he had in 1941 with a French policeman who was anxious to arrest him. The policeman says, “. . . it used to be believed that it was better to let a hundred criminals escape than to arrest one innocent man. We have done away with that. We believe that it is better to arrest a hundred innocent men than to let one criminal escape.” The policeman goes on to note that the United States still adheres to an old form of human rights. His government (as an occupied country under the rule of Nazi Germany) had come to recognize that “society is more important than the individual.”

In the summer of 1940, Varian Fry, a 30 year old journalist with a degree in classics from Harvard, undertook a trip to occupied France under the auspices of a newly formed group called the Emergency Rescue Committee. His job was to attempt to get as many political, intellectual, and artistic refugees out of Europe as possible before the French authorities and the Gestapo began to hunt them down.

He expected his work could be completed in three to four weeks and was unprepared for the elephantine morass of murky governmental red tape, the underground of political tension and spying, and especially the hostility of his own American government toward his mission. Fry stayed in France for thirteen months before he was summarily deported (with the collusion of the United States government). But it did not occur before he had become an American Oscar Schindler. In spite of constant harassment by the French and the Germans, he constructed an elaborate and large-scale rescue network that moved some 1300 people across various borders and to safety from Hitler's retribution. In addition he offered counsel and financial support to thousands more.

The book outlines the problems Fry faced and then goes on to chronicle the ingenious and highly dangerous solutions that he and his associates created in order to solve them. Neither Fry or any of his workers were trained in intelligence or espionage. They had to learn their tradecraft on the job, which meant enduring a number of narrow escapes and failures as well as successes--many of which are recounted in this volume. Fry admits at the end that it was his triumph over his own hesitations that might make his story exceptional, but primarily through it all his narration is unassuming and modest to a fault.

We need to add here that among the many guided to safety by Fry and his fellows were: the artists Marc Chagall, Max Ernst, and Andre Breton, the sculptor Jacques Lipchitz, the philosopher Hannah Arendt, and the authors Franz Werfel and Lion Feuchtwanger.

This brings up another item other than the book. The Buchanan Center for the Arts hosts the exhibition "Varian Fry Assignment Rescue" from August 26th to October 25th on the square in downtown Monmouth, IL. Come to see it if you can. Read the book if you can't make the exhibition. Photos of the opening were taken by yours truly.
Posted by DramaJim at 4:21 PM