Another Trip With Bill Bryson 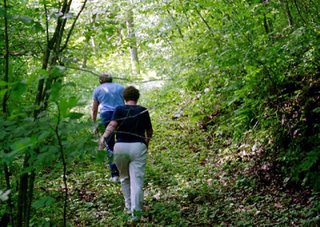 Bill Bryson writes primarily about travel and language. His homespun philosophy is held together by an engaging personality and a penchant for exploring locations and ferreting out the quirky people who live in them. The quintessential Bryson books for me have been Notes from a Small Island and A walk in the Woods--both of which combine nostalgia and a yearning to protect the environment.
In his newest, The Life and Times of the Thunderbolt Kid, Bryson returns to his childhood home in Des Moines, Iowa and recalls his parents and his childhood. It resonates particularly with amusing portraits of his buddies in truancy like the incorrigible beer thief and drunk Stephen Katz, the brilliant explosives expert and con man Doug Willoughby, and the clueless butt of all jokes Milton Milton. They're such recognizable types because most of us had similar buddies in our youth.
Bryson's notes that a Gallup poll named 1957 as the happiest year ever in US history because in the following year the Dodgers and the Giants deserted New York. That action set off an era when "greed" became the new motivator for all middleclass Americans. By the end of the fifties, he feels that the average person had everything they had ever dreamed of so there was not much left for them to do for the next forty years other than collect more and bigger of everything from appliances and cars to debt and houses. The chapters often end with the conclusion that whatever he was talking about was the "last of something really special." Most amusing is his wonder that any of us ever reached adulthood in an age when there were no seat belts, bicycle helmets, smoke detectors, dangerous foods, drink or playground equipment, cell phones, or even a 911 to dial.
The book is ultimately an easy and amusing tour through a now vanished world. If you are over fifty put it on your bedside table for a few memories and a chuckle or two before nodding off. Don't worry about the unspoken other side of this coin illustrated by the story of the two old codgers sitting on the porch. One says to the other "Do ya remember the good old days?" The reply is, "Yup! And they never was!"
Posted by DramaJim at 9:04 AM