Measure for Measure at the Goodman

We saw the Goodman Theatre's production of Shakespeare's Measure for Measure last week. It was well done and technically flawless as usual , but I wasn't bowled over and did have some concerns which will come out in my comments below.

Shakespeare’s Measure for Measure  has been a problem play for 400 years and director Robert Falls manages to reinforce that feeling in his current Goodman Theatre production in Chicago.  First of all  Falls falls for the old  “if you don’t have the actors over-design it”  and hope the ever moving scenery will  cover up the cast.   I wish it were not the case but no one in the company, aside from a few of the comics,  seemed  to rise above the  stew-- i.e. nothing in this production is bad but nothing got my blood flowing either.   James Newcomb’s Duke returns to  eavesdrop  and meddle not as a Friar but as a Barry Fitzgeraldish Irish priest.  He is amusing yet has bothersome problems with keeping his accent consistent.   The same could be said of Isabella who pronounces only her name in dialect while sounding straight mid-western the rest of the time.


Notwithstanding things do keep moving.  Falls accelerates the scene transitions by starting entrances in slow motion as the previous scene winds down and then bumping up the lights and the movement to full speed as the next scene begins.  In another nice moment he highlights Angelo’s  lust for Isabella by having her enter in low light stop motion and rush forward to embrace him.  The audience gasps and laughs.  There is a quick blackout and the lights come up again to see them both apart and ready to play the scene as written but with an indelible comment made visually about an undercurrent in both characters.


And then there’s the ending.  Directors often search  for the right visual and movement metaphors to reinforce or clarify the action of a play and I have just noted a successful  example of one such choice.  Yet when directorial search extends into choosing an action that is not even vaguely suggested by the  text, I must draw the line.


Falls’ decision to have the freed convict Bardardine sneak back during the jazzy final curtain love fest  and stab Isabella  just seems ludicrous rather than meaningful.  Barardine’s short comic appearance as the death row inmate who refuses to cooperate in his execution is milked nicely by actor Joe Foust,  but his short re-appearance in order to be pardoned  by the Duke gives us not one remote shred of reason as to why  barely a minute after his release he would somehow acquire a knife and return to the party and butcher the lady the Duke has just invited to be his wife. 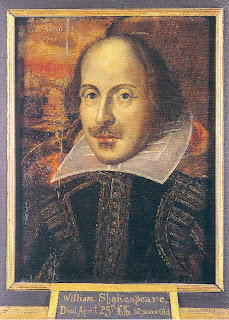 Shakespeare gives us plenty to think about  in the play.  Power is beguiling and sinister in its reach.  Justice seldom manages to be just and can be arbitrary.   Yet there is a difference between seeming arbitrary and being arbitrary.  While admitting Euripidean  deus ex machina endings are possible,  it remains my thought that this was not what Shakespeare set out to say in this still problematic work.