Friday June 26, 2015
We disembarked from the little boat that had carried us through the Danube Narrows at what I called a Bavarian beach just outside of Weltenburg Abbey's precincts.  Not a grain of sand in sight. 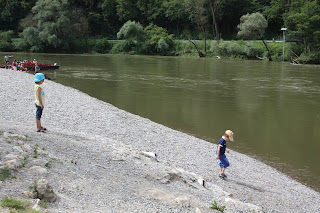 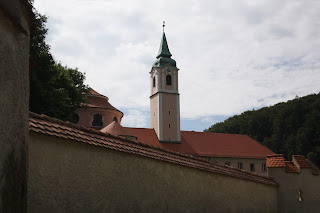 We marched up toward the Abbey Compound and quickly also noticed another set of markings recording various river high water marks. 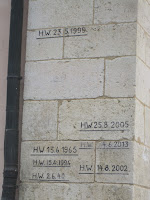 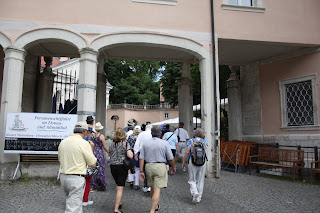 The Danube remains an angry river and the monastery has been inundated time and time again both recently and in the past.  You just have to wonder why the Benedictine Monks who founded it around 620 AD would have picked an area so prone to flooding.   It might have been secluded and amenable to contemplation and study, but it sure must have been miserable during Matins when the spring torrents were creeping into your church.

There are currently only seven monks in residence, but private contracted interests now support a hotel, business center, restaurant, and of course, the brewery. Not an accident I trust that the first thing you see after entering is a spacious courtyard dotted with lots of shady tables. 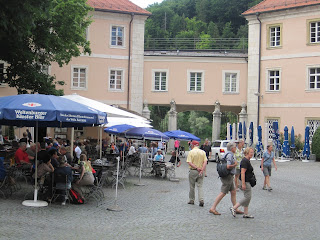 Full meals as well as snacks are on the menu, but the real star is an icy mug of the Abbey's signature dark beer that has been brewed on site since the eleventh century.  It looks a bit like Guinness in the glass, but I thought it was a tad sweeter.  Click to see the mug better. 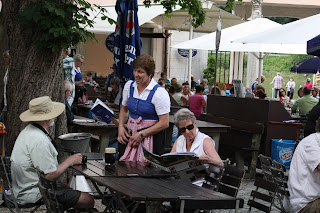 Methinks they know a good thing when they see it because a stock up for later sign entices in English. 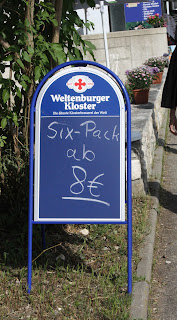 After some liquid fortification you can tackle the Baroque St. George Church built by the Brothers Assam in the 18th century.  Cosmos Assam was a painter and Quirin Assam was the sculptor and architect of the pair.  They were both supremely talented. 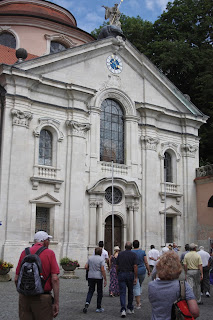 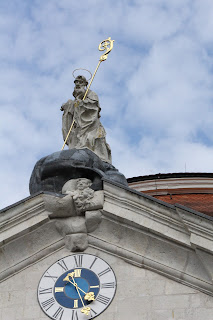 It is a small church by the scale of  the cathedralic monoliths we have seen in the past week, but it is  somehow a bit more human and likable.  Upon entry you are immediately drawn down the nave toward brightness of the main altar. 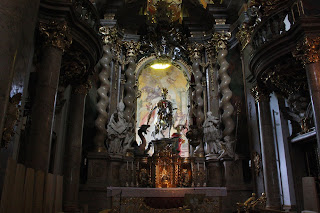 Bathed in light is a wild, muscular, equestrian St. George slaying the dragon. 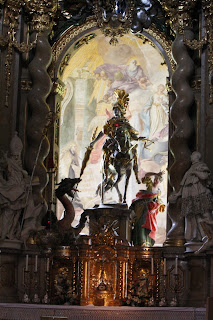 Behind the statue is a large fresco of the Virgin Mary also slaying a serpent. 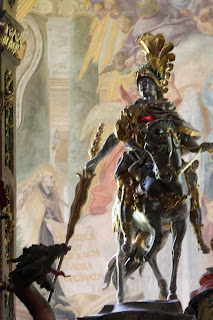 The light source in the large ceiling semi-cupola floods in through windows that cannot be seen from inside. 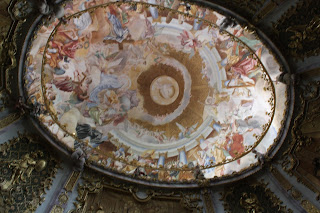 But are clearly visible from outside 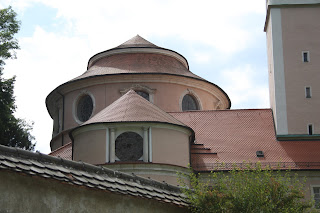 The fresco itself is a masterpiece of tromp d'oeil as it is not a dome at all but a flat surface. 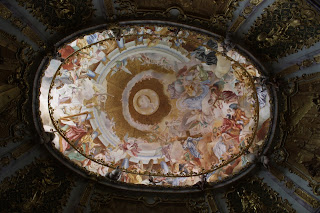 Click on the picture below and you will see Cosmos Assam himself in a red coat looking down at you and seeming to smile in satisfaction at fooling the devil out of you. 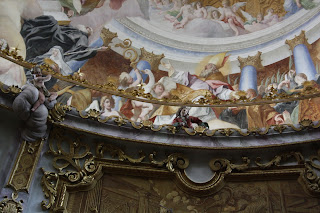 There are several other frescoes in the sanctuary, but I found this one quite powerful. It depicts Christopher Columbus landing in America accompanied by Christianity in the form of twelve monks gathered behind and ready to proselytize.  Remember to click to see more detail. 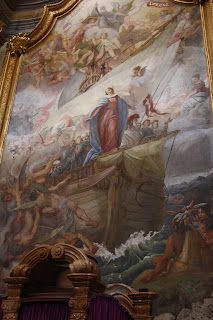 One final look as we depart.  You can feel the church's pleasant scale and the coolnes of its blue grey ceiling and walls. 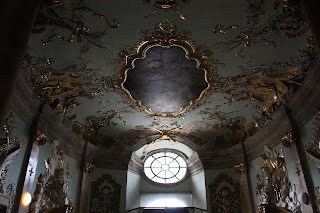 We left the church and, as we exited the Abbey grounds,  got a final close-up of the rocky walls of the Danube Gorge 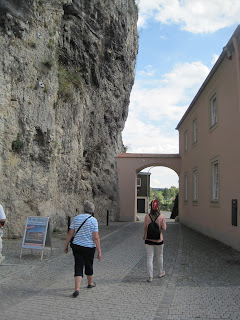 A bit further along the path the bank flattened and the river widened out again.  A small ferry was snuggled in at the bank waiting to take passengers and small vehicles across. Like some others we have seen on this journey, it was guided and held against the current by an overhead cable. 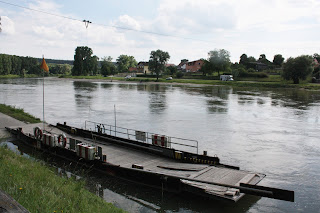 A few steps further along we came across a large rough stone just off the path.  It was a moving memorial to three American soldiers who died at this spot in the river in 1975.  It was a training exercise and fifteen men were in a rubber boat that capsized. Twelve were saved by other soldiers and Kelheim citizens and three perished.  Click to enlarge and read the inscription. 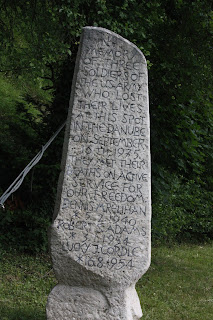 We rounded another corner and what to our wondering eyes should appear, but a parking lot in which our coach was now idling.  The driver who, had dropped us off in Kelheim, had driven around the narrows to the other end and was now waiting to take us back to town for an afternoon snack at a local Biergarten. 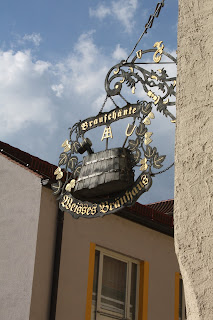 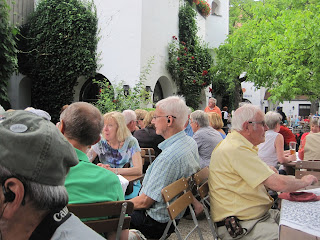 Jan, in a Van Gogh moment, memorialized my ear just in time for some fresh hot pretzels 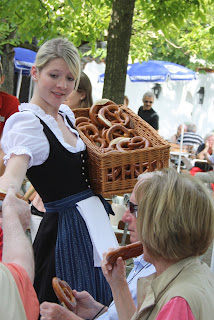 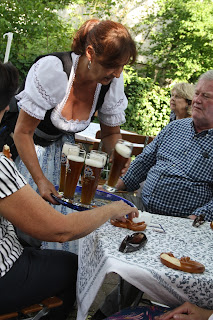 What could be better! 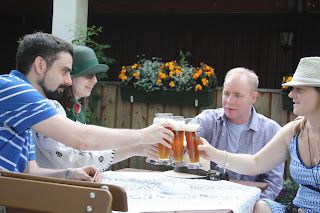 Prost!
With the sun starting to descend, we reboarded our coach and headed back to our Viking Jarl longship which had, while we were touring the Kelheim area,  made its way onto the canal that connects the Danube with Europe's northern rivers.  More on this as we head toward Nuremberg in the next entry.﻿