Tucked in late last night and never even heard our departure.  Woke up to a view of Rudesheim am Rhein--a picturesque town of 10,000  that amazingly gets some three million visitors a year.    DOUBLE WOW!  Things seem to be getting better and better. 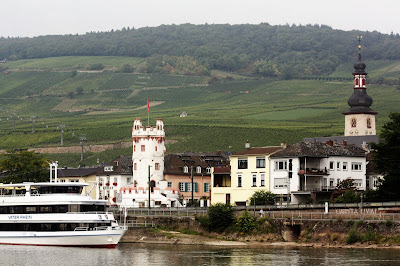 We got our first hint on how they milk their popularity when we were treated to a miniature choo choo to take us into town.  That's Katya our cruise directors chatting with the "engineer." 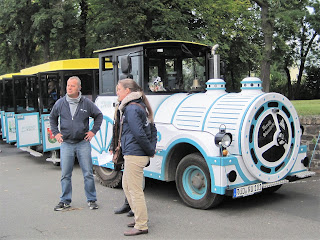 And here's a happy passenger climbing aboard. 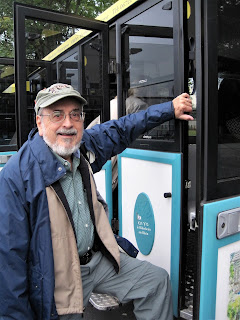 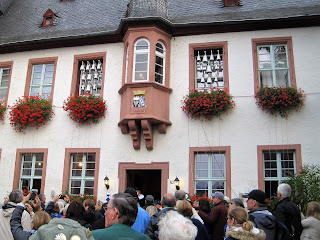 The museum  displays a  large collection of  mechanical music playing devices ranging from the simple to the grandiose and complex.  A costumed  major domo spoke on the door stoop and then let small groups enter. Each group was met by a costumed  docent who moved us with Germanic efficiency from room to room. Our guide was a lovely young woman who had a winning smile and demeanor even if her English spiel seemed a bit too sing songy. 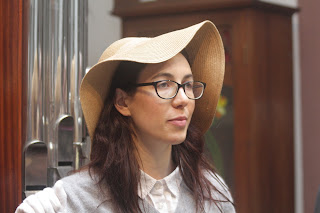 She began with some of the earliest of recorders and players like the big horned Edison phonographs. 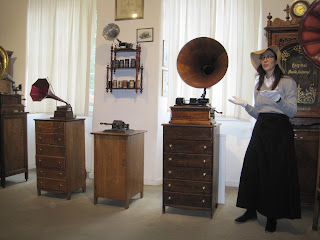 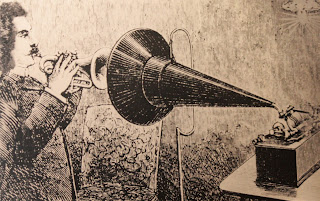 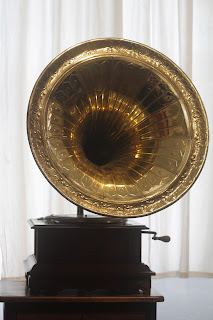 Then  the machines got bigger, more complicated, and more ornate.
Even more remarkably most of the old players have been beautifully restored  and are operable. 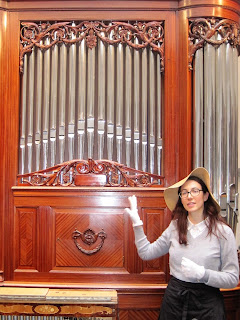 The doors open  here to reveal the paper roll that drives this large floor model . Click to listen a bit.


This one snatched its melody from a large rotating metal disk. It sounds more like a carillon.

Here we salute the leader of the band. 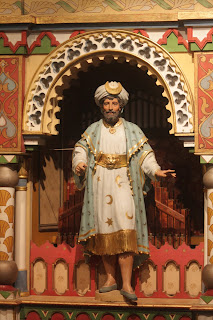 Each one is more intriguing than the next/ 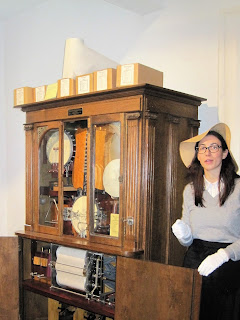 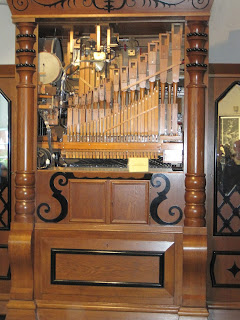 I liked the way this one chug chug chugs away with belts and pulleys. .

Unfortunately I didn't get a recording of this one, but it. featured a whole section of mechanical fiddles sawing away. 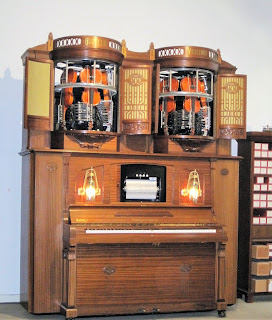 The final player was a  concert grand that zipped through a sweetly romantic rendition of the Moonlight Sonata. 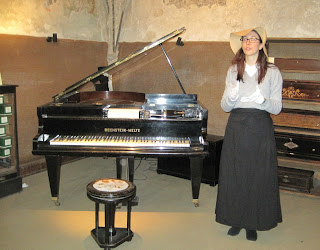 This was a first rate museum showcased with precision and professionalism.  Whether you arrive in Rudesheim by boat, train, or car it should be on your list of stops. It was a truly enjoyable experience..

After an hour of  mainly standing in the museum, we were happy to get a chance for a  sit down and some refreshment at the Rudeshimer Schloss restaurant.  On this morning a special coffee in their out door courtyard was included as a part of our general tour. 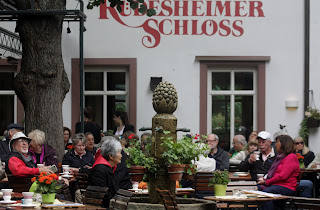 And what a coffee it was. They took the brew and added some sugar and vanilla. 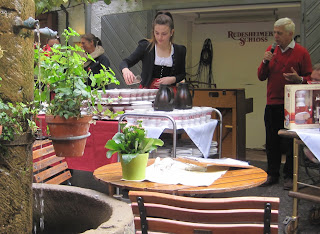 Next came a pile of whipped cream. 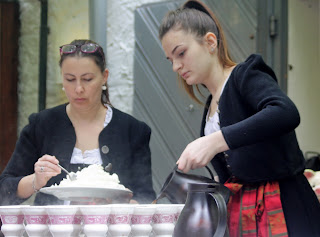 Then a  bartender applied a slug of  "Asbach", a locally made brandy of  dangerous potency.  The whole concoction was flamed and 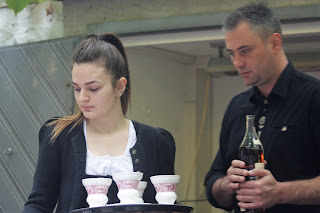 finished with some chocolate shavings. Gad and Zooks what a great way to celebrate a mid-morning coffee break. 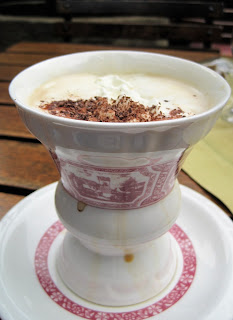 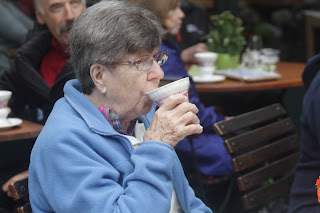 If that wasn't enough we were serenaded by a bouncy trio while the drinks were being prepared. 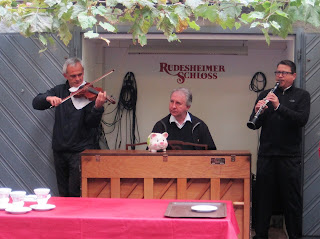 For some of the three million visitors with more time, you can add in a cable car run that takes you out of the town and over the vineyards that cover the surrounding hills. It ends up close to the large Niederwald Monument just outside of town. 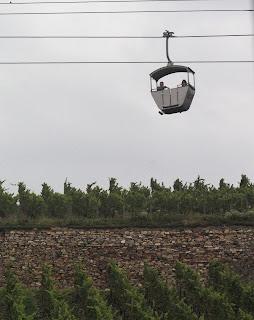 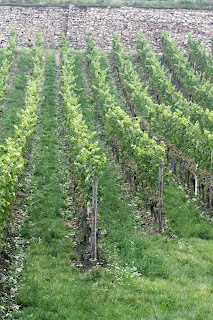 After all this we still had over an hour to meander down the winding cobble stoned streets that led back down to the river.  There were plenty of shops along the way featuring everything from inexpensive souvenirs to high priced vintage wines and designer clothing. 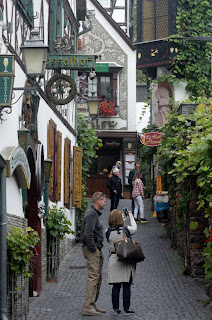 When we re-boarded the ship,  it was perfectly clear why three million people a year made a stop in Rudesheim. 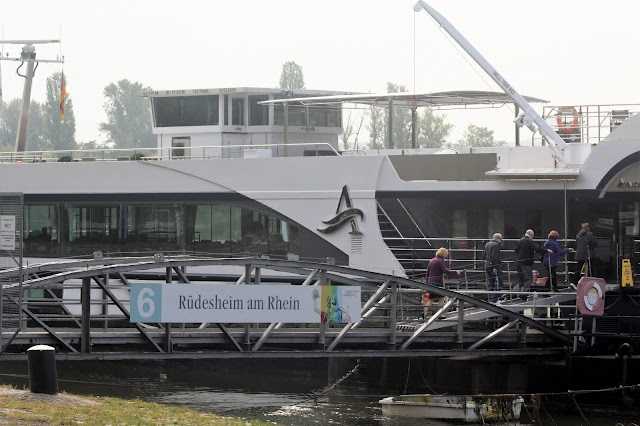 Onward.  We sail through the river's signature attraction--the famous Rhine Gorge--right  after lunch.  That will appear in the next blog entry.  Hope you will join us.