REVIEW: Mary Zimmerman's The Secret in the Wings 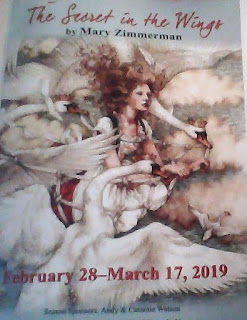 Mary Zimmerman’s The Secret in the Wings is the latest offering at Tucson’s Rogue Theatre. What is not a secret is that hiding in the wings is a Rogue company that is a superlatively talented and well-oiled theatre making machine.  They give and get with never a sense that someone must be the star. And always they exude an absolute joy in working together. This is a true ensemble of players whose composite is far more than any individual within. They are also the ideal set of actors to generate the milieu needed for a show like this. Kudos to Cynthia Meier for her outstanding work in bringing this early Zimmerman piece to the stage.


I believe The Secret in the Wings was first performed professionally in 1991 in Chicago by the Looking Glass Theatre with Zimmerman herself doing the directing.  The plot retells a series of fairly unfamiliar fairy tales that are truncated near their climaxes in order to start telling another one. The conclusions to the tales occur as the show winds down.  A frame story also tracks through the piece.  It features a Beauty and the Beast narrative in which two parents leave their daughter with a neighbor to babysit while they go out. The beastly neighbor is an ogre who has a real tail and fills the young girl with terror as he continually asks for her hand in marriage. Director Meier notes in her excellent program comments that “This structure makes the stories seem even more dream-like as we in the audience try to piece the different elements together.”

We could go on from here to muse on the cultural significance of “fairy tales” and how they have tapped  the deep unconscious feelings of all humans for hundreds of years, but suffice it to say that those thoughts only occur after the fact and never bubble up during the performance of the show. I was thoroughly held by the stories, the beautiful piano accompaniment, and the swirling activity of the players as they metamorphosed from character to character simply by donning a new crown or dress or cloak.  The tales are a bit “Grimm” at times, but there is plenty of humor to balance out the scary parts. e.g. the beheadings are managed with black hoods, a phony knife, and semi-deflated bright red balls.


I have implied that there is no pressing need to label outstanding performances in this beautiful ensemble piece.  If I applaud any individuals it would be Patty Gallagher and Joe McGrath for their ability to match the physical energy levels of the younger folks in the cast.


Technically the show is lovingly smooth. The lighting is subtle and colorful. Most interesting to me was the razor sharp square on the floor that the young woman in the "Two Pennies" story clawed at several times. The costumes were often drawn deliberately from past Rogue productions.  I was particularly pleased to see the snake puppets from the company's last Zimmerman production getting an encore.  Mr. McGrath’s set was full of earth tones and pointed nicely to the world of dreams and the unconscious by putting us in a basement reached by a long set of stairs. The space  was filled with the detritus of an attic which became the props and costumes used in the show. There were buckets, old clothes, a model ship, dress forms, and a striking set of elaborate practical old floor lamps.


The show only runs for another week and if yesterday’s full house was any indication, there will not be many seats left for the rest of the run.   See it if you can.
Posted by DramaJim at 5:16 PM