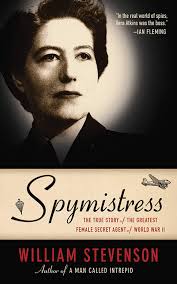 I have had some interest in WWII intelligence operations ever since I confirmed that my Uncle John was a spy during that war. The confirmation came partially from a box of materials sent to me after his death and then from now unclassified government files of his employment records with the OSS. He probably only took an occasional cloak and dagger trip because his work was primarily analytic in his academic background area of far eastern anthropology and sociology.  Uncle John’s story has plenty of gaps and is still waiting to be told in detail. There is definitely a book in there somewhere.

This brings me to the book I have just finished titled Spy Mistress by William Stevenson. It is an outline of the actions and career of Vera Atkins, a Romanian Jew who became one of the leaders in England’s  WWII secret service. She grew up in Eastern Europe and changed her name when she settled in Britain in the 1930’s. And just like my Uncle John, there are gaps in her story right up to the present day.

Atkins successfully hid her Jewish background and rose to power in the intelligence community in spite of being a woman in an almost completely male organization.  The book tells the story of how Atkins maneuvered her way into essentially running the anti-Nazi resistance in Europe during and after the war. It also covers her relationships with several men including General “Wild Bill” Donovan, the head of America’s newly formed OSS.  One of the many things I learned was just how strong the Appeasement movement and the  virulent anti-Semitism were in the pre-war era. Churchill was not in power yet and had major difficulty trying to convince both his own countrymen and allies of the danger of Hitler.  When Bismarck said that Hitler was just a mob leader, Churchill replied with some fascinating lines from Kipling that also seem compelling in today’s political climate.

“This is the sorrowful story
Told when the twilight fails
And the monkeys walk together
Holding their neighbor’s tails.”

At another point Churchill returned to Kipling to comment that “These appeasers feed the crocodile in the hope of being the last to get eaten.”  The early chapters are devoted to the lead up to the war and then it turns to the fight to formulate the  SOE (Special Operations Executive), which was charged with training, equipping, and organizing armed resistance in Nazi occupied countries.  Atkins began her career as a kind of an administrative assistant and slowly gravitated into leadership as her knowledge and skills became evident.  The old line military intelligence held little truck with sabotage and guerilla warfare, but Atkins and her associates supported the use of so called "closework" that followed the philosophy of the Greek physician Hippocrates  who said “A desperate disease requires a dangerous remedy”

The SOE was heavily involved in the insertion of agents and the organization of resistance cells as well as developing unusual tools for transmitting messages and for bomb making and other devices for killing or maiming the enemy.  One project involved the insertion of explosives into piles of animal feces. If this sounds James Bondish, it might be well to note that Ian Flemming was an important figure in the SOE hierarchy.

I must admit that I was not aware of how much pushback there was against guerilla war in occupied areas and how much anti-Semitism sentiment there was in the upper levels of the British government. Throughout the war, even after Churchill came to power and the USA entered the fray, the British authorities did not want to send Jews onto the continent even though they had the most experience in being vilified and murdered and had a real reason to engage in physical payback.

Atkins survived the war and lived on in relative obscurity for many years. Some of her story was not told until after her death.  I wish the book had a somewhat more vivid style and a more compelling narrative structure. Events are often tied to individuals in Europe whose names and background are unfamiliar at least to me. This can bog things down and tempt the reader to skip things rather than participating in a cohesive progression. My guess is that works like this end up being read by fiction writers who then build their own more engaging and suspenseful stories of heroic actions.
I give it a 3.  But I did learn some things.