The Brutal Telling by Louise Penny 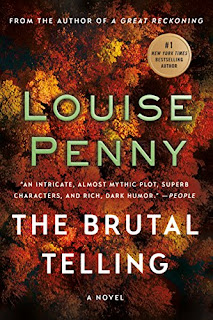 The Brutal Telling by Louise Penny

Inspector Gamache and his team return again to the bucolic village of Three Pines in Louise Penny’s fifth outing with the intrepid chief of the Canadian Surete’s Homicide Division. They arrive to solve the death of a mysterious unidentified man and meet up again with the familiar and often eccentric cast of characters who inhabit the village. There is the artist couple Peter and Clara. There is old acerbic Ruth and her pet duck Rosa, Myrna the bookstore lady, and,of course, the gay couple Gabri and Olivier, who run the town hangout called the Bistro. Things get more complicated when the peripatetic corpse appears in the Bistro dining room only to be then discovered to have been moved from the front hall of some new residents of the community.  It appears ultimately to be the body of a longtime hermit who lives in the woods outside of town and the developing clues begin to point more and more to Gamache’s friend and Bistro owner Olivier. As the case against Olivier deepens we get some heavy doses of contemporary injustice issues ranging from gay prejudice to the mistreatment of native peoples. There is also plenty of time devoted to talk and plot action centered on literature, art, and music.  You might even say that the book swerves toward  becoming a meditation on solitude, greed, regret, and conscience. A quote about chairs taken from Thoreau’s Walden pops up so many times that it might it might easily appear as a general heading above the title. "One for solitude, two for friendship, three for society.” It also may be that it takes on special meaning for this reader who read the book while enduring the Covid 19 lockdown. There are plenty of pluses and minuses about solitude and loneliness.

I had no trouble becoming engrossed in the book particularly its marvelous evocation of nature’s enveloping wholeness and its relationship to native civilizations. Penny is also a master of integrating the complexity of the lives of the minor characters into the story.  I only wish that she had managed to make the central premise of the plot a bit more convincing. It is just a real stretch that the unidentified murder victim had managed to clear and take over a small slice of land located on someone else’s property less than a half hour’s walk from town and then build a log cabin on it, furnish it with priceless antiques, clear and tend a vegetable garden on the premises, and still keep both his identity and literally his presence secret for twenty years. It also struck me as more humorous than convincing that two fairly reasonable adults would suddenly in the same evening resort to trundling a dead body about the countryside and dumping it in each other’s business establishment.

In sum give this one a 4 for its philosophical content but only a 3 for its plotting premise.