An American Quilt by Rachel May 2018 Book Review 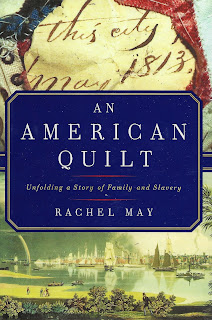 An American Quilt by Rachel May 2018

Have you had difficulty in processing the words “systemic racism”?  Did your schooling  teach that slavery was basically something  practiced by Southerners?  If so, you may need to read Rachel May’s An American Quilt.

It is not an easy or quick read, but it is packed with content that may help you adjust your thinking about racial issues in our country.  It took May years to pursue her investigations and after that there was still the work of developing a strategy for communicating both the history and the partly imagined stories of enslavement.
The emotional thread of the book is carried by the author’s discovery of a group  of unfinished quilt tops, their paper patterns, and a cache of saved letters. That the quilt tops were never sewn together makes the unfinished quilt a powerful  metaphor for our country’s racial history. We are all still in the process of working toward “a more perfect union.”

The family she highlights had both Southern and Northern roots. The key marriage involves a woman(Susan Williams) from the North and a man from the South (Hasell Crouch).  Susan’s new husband holds inherited enslaved people as domestic staff and as she tries to rise in Charleston SC society, she shows an easy adaptation to this situation.  The enslaved people (Minerva, Eliza, Jane, and Juba), whose history is little more than their first names, become the threads that Ms. Day has to basically re-create.  Given the paucity of records for people of color, she must depend on casual comments in the old letters of white masters, a few bills of sale that document the transfer of the enslaved to other owners, and the generally available historical record.

You will note in the preceding paragraph that I use the term “enslaved people” to refer to what many of us were taught to call “slaves.” Ms. Law argues that we must revise our language in order to begin revising our imprinted white supremacy.  Using the term “enslaved peoples” imparts to these departed souls some of the recognition they were denied during their lives.  They were real people.  The difference was that the whites thought that black and brown people were essentially sub-human. Thus it was easy to treat them as objects that could be bought, sold, abused, or bequeathed.  This is a real life example of what is known in communication theory as the Sapir-Whorf  Hypothesis, which claims that the way a speaker structures language and uses or speaks words affects that speaker’s own understanding of the world.  i.e.your perceptions are partly controlled by the spoken language you use.  Add to this the brutal treatment of  enslaved  peoples and the all too common sexual abuse of  females by their masters and you have a crazy quilt indeed.

One of many historical tidbits that I was unaware of was that women of color were identified by their main farming occupation and often called  “hoes. “ That is, according to the author, the derivation of the word “whore.”

While developing her story of the personal lives of enslaved people and their masters, May also weaves another thematic thread. She effectively rebuts the long lasting white perception that slavery, racism, and trafficking were mainly confined to the South.  She documents the interconnections that the families and the owners of the Northern fabric mills, the Northern distilleries, the Southern plantations, and the ships that trafficked slaves and goods were participating in.  She demonstrates that a large proportion of our young country’s growing economic wealth was dependant on the labor of enslaved people. The trade in human lives produced “an endless cycle that bound North and South” and made the North just as culpable for slavery as the South.  As May finally said  “No one was clean of slavery.”

My admittedly minor caveats to all this is that the book is 400 pages of small print with a lot of less than well printed illustrations. There was a little too much detail on sewing, fabric, and quilt making for me, but for someone with an abiding interest in those items that would not be a negative.  I also found it a challenge to process the constant time jumps back and forth. The shifts too often included repetitions of material that had already been treated.  Thus I do think the enterprise could have profited from a firmer editorial hand.

In spite of these concerns, I learned some new things and was reminded of some things that I had forgotten.  I am definitely the better for reading this book and will never again use the term “slave” when I can say “enslaved people”.