Book Review: Twenty Theatres to See Before You Die 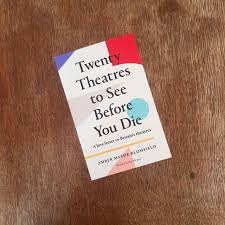 Twenty Theatres to See Before You Die

Way back in the sixties, John Steinbeck wrote a best seller titled Travels With Charlie. As I recall he piled into his truck with his dog Charlie and set out on a cross country odyssey that was memorialized  in a penetrating and heartwarming take on the human temperature of America.  Amber  Massie-Blomfield’s Twenty Theatres to See Before You Die is a similar offering in that she travels to a selection of fascinating theatres throughout Great Britain and uses them as the grist for her comments on their physical properties, their audiences, their communities, their employees, their directors, and ultimately to the nature of theatre itself.  She does not purport to make a “best of” list or rank the theatres she has chosen; she simply tells their stories. Let me also note that this is not a footnote laden academic study.  It is short, conversational, often quirky, and will make a delightful read for anyone with even a bit of theatrical blood in their veins.

Her twenty choices are all intriguing in some way. They are not the common names and I have only been in three of her choices although I have been in a lot of British theatres in my lifetime.  The range of her choices goes from Cornwall’s cliff side Minack Theatre, which was literally hewn out of stone by its founder to the miniscule Tom Thumb Theatre in Margate, Kent.  She even pays homage to the archaeological remains of the Roman Theatre at St. Albans, which is one of the three I have visited.

Where do we start?  Every reader will want to underline a few notes from her  text and what follows are a few of mine. If they don’t appeal,  don’t worry, because I guarantee there will be another tidbit that will attract your fancy.

One of the first theatres she describes is the Theatre Royal in Bath (that’s the second of my three).  Ms Massie-Blomfield uses this historic venue to call up Peter Brook’s The Empty Space. She quotes Brook’s famous lines, “I can take an empty space and call it a bare stage.  A man walks across this empty space whilst someone else is watching him, and this is all that is needed for an act of theatre to be engaged.“  Then she goes beyond Brook to declare that even a space with no one walking across it is not empty.  It is a place of “memory, and history, and politics” along with all of the resonances that went before. A performance can never be separated from its location whether it be a grandly decorated auditorium or a dank basement.  I think immediately about my theatre,  the old Monmouth College Little Theatre,  a space where the insubstantial pageants have long faded and the fabric long dissolved.  Yet it still lives in the memories of its directors, its actors, and its audiences.  That is how this book works. You may not know any of the theatres she visits, but her descriptions make you think about other theatres you may have visited or worked in.  The author has a love for the theatre and it shows in every page. If there is a common thread that runs through all the chapters, it is that the people who run or have run these spaces all have had a passion for their art and the uncommon energy to pursue their visions at all costs.

From the chapter on the Liverpool Everyman Theatre, I underlined the idea that when a theatre works well it reflects its city or its community back at it. By sharing with all a theatre makes its home town a better place.  This is good advice for any artistic director.

From the chapter on the Holbeck Underground Ballroom located in a red light district in Leeds, there was for me a spinoff of my old colleague Bill Wallace’s “before the curtain speech” to his casts.  The Leeds director phrased his theatrical admonition as  “Have fun. Learn how to collaborate, show up on time. Believe in something.”    This was followed up by a discourse on the idea that “Principles only have value when they become difficult to stick to.”  Reading  this in the week that our country was laying the civil rights giant John Lewis to rest just added to my appreciation of the sentiment.

I could go on, but there is no need.  This love letter to the spaces wherein theatres can exist and to the people who work in them and attend them makes its own points. Top that off with a style that is personal, entertaining, and ultimately upbeat and you have a fine read.  I’ll not close with a sleep but with the motto for the Battersea Fine Arts Centre.  It works for every theatre on every level.