Eric Larson's The Splendid and the Vile review 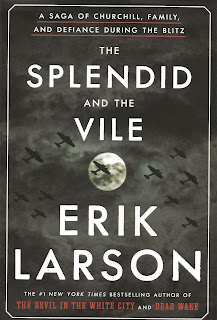 Larson Eric The Splendid and the Vile

“Mammoth” is a word that defines anything written about Winston Churchill. Everything about the man is more than life-size and the bibliography expands to fit his personality and accomplishments. Eric Larson with The Splendid and the Vile joins the list of eminent writers who have tackled the Churchillian mountain. The book’s five hundred closely packed pages covers only the critical period between his election as Prime Minister through to the war’s end. It differs from a standard military battle history because it tends to  concentrate on the man, his family, his inner circle, and the people who endured the horrors of the Blitz with him.

A good deal of this retelling is not pleasant. You must endure the destruction of Coventry, Plymouth, and London in excruciating detail. On one of Churchill’s now legendary excursions into the smoldering wreckage of London, Larson reports he asks a small boy what he wants to be when he grows up. The boy responds with a depth beyond his years, “Alive!”

That may illustrate the “vile” of the title, but there is plenty of time devoted to the splendid too. We have detailed reconstructions of the composition  and delivery of some of his now famous speeches to Parliament and humanizing glimpses of the man in his bathtub puffing on a big cigar while dictating messages. One humorous quote was from a young woman who feared she would die a virgin if she didn’t have sex with her boy friend.  Her diary records "If that's really all there is to it, I'd rather have a good smoke or go to the pictures."

Even more interesting are detailed accounts of Churchill’s family life. We get to peer into his relationship with his wife, Clementine, his young daughter, Mary, and the roving eye of his son Randolph’s wife, Pamela.

Finally there are many portraits of the political figures and aides who surrounded the great man. My own knowledge expanded as I learned more about people like Lord Beaverbrook, his airplane construction tsar, Jock Colville, his administrative assistant, Professor Lindemann, the armament guru, and Inspector Thompson the sole detective who was his constant bodyguard.

By and large the book reads as smoothly as a novel. The pictures emerge through evocative descriptions. One example I recall came in another of Churchill’s many walks to survey bomb damage. Larson says, “In his long overcoat over his round form, he looked like the top half of a very large bomb.” Only occasionally are we bogged down in too much detail. The main item I recall in this vein was a full page devoted to a list of drug supplies that the hypochondriac Rudolf Hess packed in a suitcase when he flew into England toward the end of the war.

Anyone with a penchant for WWII biography will find this book fulfilling. Churchill the man was often erratic and sometimes  downright weird, but there is no question that he was  “Splendid.”

A final suggestion. If you have never been to London, do not miss the experience of touring the Admiralty War Rooms where a lot of  this book takes place. It is now a splendid museum.