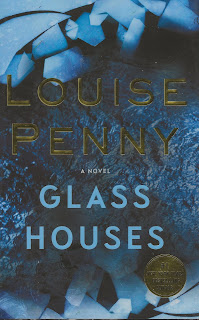 Let’s start with a summary of a conversation from about half way through the book. Myrna (the psychologist and bookstore proprietor), Reine-Marie (Gamache’s wife), and Gamache (our heroic and always troubled detective) are discussing why Pinocchio was not a real boy? It was not just because he was made of wood, but that he had no conscience, other than Jiminy Cricket. People with no conscience at all are called psychopaths. We are used to the rather transparent movie villains of this type, but most psychopaths are far cleverer than that. They have mastered the art of pretending to care, that it is they who have been wronged, and then achieve their retribution by masterful manipulation. (Think Iago,) Gamache is beginning to pierce the  fog that the Cobrador appearance has laid down and now starts to posit that  someone in the background was manipulating all the participants as well as the investigators. As Penny puts it, someone was lurking in or around the village who was “in fact not quite human.”

It is this driving force that Armand Gamache must deal with and I wish that Penny had been more successful in elucidating it.  Somehow the early narrative line that keeps shifting from the lead up to the murder and back to the trial of the accused murderer never quite gels. As one critic noted, there is “too much teasing with too little action,” There is “too much philosophizing and repetition of the same situation.”

Why Penny feels it necessary to conceal the identity of the accused from the reader is beyond me. It may create some early suspense, but everyone in the courtroom can see the identity for themselves so why not us? Another bothersome detail from the early going is that Penny’s normal skillful integration of weather and nature seems to have gone astray. She puts Chief Gamache in a literal hot seat by turning the courtroom into a sweaty tizzy by the convenient loss of the air conditioning. This may have been pertinent symbol for the Scopes Monkey Trial, but seems rather too contrived for the modern day.

What does still work is the establishment of an atmosphere of fear and dread through the use of the scary legend of the Cobrador, who historically stood silent and shamed a miscreant until they broke down. That element tracks nicely through the entire book.

Ms. Penny is also known to integrate larger philosophical debates into her murders.  Here Gamache has taken on his new position and has inaugurated a secret “burn all boats” plan in order to deal with the growth of international drug cartels. This threat is believable and current, yet it takes a leap of faith to believe that in a tiny place like Three Pines there would not be some notice of rampant strangers running vast quantities of drugs through multiple border gaps for years without raising a shred of suspicion until now. It is for this reason that I feel that Penny seems to be laying more on her idyllic fictional town of Three Pines than it can bear. Would the head of a giant multi-national drug cartel be so stupid as to run around with only one bodyguard no matter how safe he felt? Is the Bistro quite up to harboring so many sinister guests and more secrets behind fireplaces and in walls than are found in a dozen Dan Brown novels? I think not.

Nevertheless, Gamache’s moral wrestling match on the issue holds  attention. Long term revenge nags as various approaches are debated. Mahatma Ghandi’s thoughts about “a court of conscience” that goes beyond and above temporal laws keeps rearing up.  Gamache and his few confidants struggle with whether a moral imperative to tell the truth exists. Can such tragedies as the destruction of a Coventry or Dresden be defended when in pursuit of a later and more overwhelming defeat of the axis? And ultimately for Gamache can perjury or at minimum failure to reveal what you know be compensated for by a larger long term necessity?

The book may simply put Gamache on a pedestal just a few feet too high and then try to justify an overly outlandish premise with too many philosophic mind games. To be gracious here, perhaps the death of her real life husband while she was writing the book may have had an impact on Penny’s more pinpoint narrative skill. It would certainly be understandable. Meanwhile I shall leave Jiminy Cricket to deal with Pinocchio’s lengthening nose.

John Meacham notes at the very end of His Truth is Marching On  that he has not attempted to write a full scale biography of John Lewis, ...