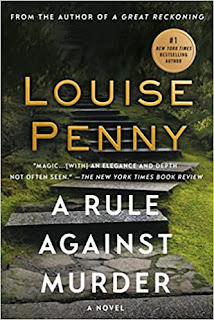 Penny Louise A Rule Against Murder 2008 4th in the series

I hate to say it, but I have finally found a real clinker in Penny’s long and distinguished list of novels. We find ourselves in a secluded Canadian lakeside summer resort that manages to have Armand Gamache and his wife as guests along with one of the most vituperative and vile families you can imagine. Very few of the Morrow family are likeable with the exception of a rather strange and androgynous child who cannot jump.

For a reason I still can’t fathom the family matriarch has decided to erect a large statue of her deceased husband on the grounds of this resort that the family has apparently visited regularly over the years. It is no surprise when one of this clan is murdered shortly after the unveiling of the statue.

Gamache is already Armand on the Spot and takes charge of the investigation. We learn a good deal more about the pasts of this covey of unpleasant suspects while everyone chows down on the gourmet meals provided by the lodge’s staff who also are suspects of course. As in all of the Gamache series our chief inspector also must deal with some moral failure in this own life. In this case it is the onus of his father’s conscientious objector past, which is rather too conveniently tied to the plot by having the 2nd husband of the matriarch revealing that he knew Gamache’s father was a coward.  As they say one coincidence too far.

A slow start develops into a less than convincing motive when the final excavation into the checkered pasts of our suspects is revealed. I must admit that ultimately I couldn’t care less who turned out to be the murderer.

John Meacham notes at the very end of His Truth is Marching On  that he has not attempted to write a full scale biography of John Lewis, ...