Book Review--SAVING FREEDOM: Truman, The Cold War, and the Fight for Western Civilization by Joe Scarborough 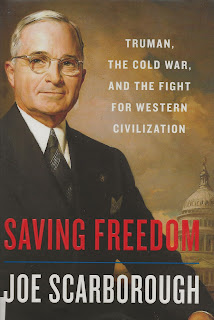 One might expect that a book by MSNBC morning anchor Joe Scarborough would be smoking with partisan political  rhetoric.   Surprisingly, what rises off the page is a short, quite evenhanded review of  the presidency of Harry Truman.  Although I was on the planet in the immediate post WWII era, I was more interested in cub scouts and baseball at the time rather than politics.  Since my wife is of the same relative age, we did decide to put in a reserve for the book at our local library in order to fill in our history gap.

Vice President Truman inherited the presidency upon the death of Franklin Roosevelt in 1945 and  quickly found out that Roosevelt,  in spite of his precarious health,  had not  seen fit to share much of anything with him--much less the existence of the Manhattan Project. So right from the get go Truman was faced with a series of war related foreign and domestic problems that all needed fixing or at least decisions made quickly.   Scarborough asserts that Truman met the challenge with an efficiency and courage that was not expected from a non Ivy League, Missouri born, failed haberdasher.

For instance, he quickly made the decision to drop “the bomb” and that did put an end to WWII. Then he faced down Uncle Joe Stalin’s aggressive expansionism by spelling out what is now called “The Truman Doctrine.”  Most of the ideas came from Dean Acheson and General John Marshall and they were critical in saving post-war Europe from starvation and economic collapse while also keeping it out of the hands of communism.

Central to the doctrine was that the United States could not return in peacetime to the isolationism it had cultivated after the First World War.  Great Britain was exhausted both physically and economically by the war and was forced to start divesting its worldwide empire.  In its place, said Marshall and Acheson, the USA must take up the mantle of world leadership.  Their immediate challenge was to deal with problems in Greece and Turkey.  They had to get Congress to authorize support for both countries before they fell victim to Joseph Stalin’s rampaging expansionism   Truman parlayed his doctrine with  The Marshall Plan and ultimately financed the rebuilding of Western Europe and the formation of NATO.  Through bends and turns with some successes and some bitter defeats (Viet Nam for instance) these doctrines have remained the cornerstones of  American international diplomacy right up to the present.

Donald Trump’s presidency, though not treated in any detail in the book,  looms large at its end. Scarborough  points to the Truman legacy as one that needs to be re-assessed  in order to deal with Trump’s attempts to destroy foreign alliances,  muddy international trade, and ignore  science and climate change.  That is where we do get to see how Scarborough’s book meets his current broadcasting situation. He builds up Dean Acheson as the lynchpin that has not been given as much credit as deserved and lauds Truman as the man who laid the ground work for the creation of the cold war and the ground work for winning it.  The warning is clear.  Trump has destroyed many of our country’s commitments to internationalism  and  his brand of “America First and Alone”  is simply not viable in the modern world.

As the book’s  title says, Truman was  the right man for the time and had the right qualities of decisiveness, courage and fighting spirit to pursue a bi-partisan foreign policy through congressional legislation and approval.  David Ignatius’   sums it up better than I can when he says this is the story of how “‘a strange little man’ from Missouri, pulled together Republicans and Democrats to confront Soviet communism and establish America as a global power.”     I recommend this read if you do not feel familiarity with Truman’s tenure and legacy.