Into the Jungle for a Visit to a Chicleros Camp

On our second  trip out of the "Cancun Cocoon" we returned to the Yucatan jungle. We were a group of ten people in a van with a guide and driver. The guide was an expat German named Rob who arrived on holiday some fifteen years ago with his fiance, got married, and stayed.  He now sells real estate and guides tours for a living.  You couldn't ask for a more lively and knowledgeable fellow. 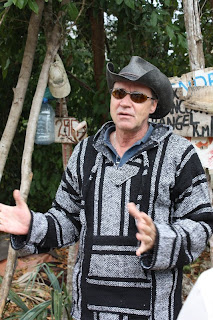 Our first stop was at what Rob called a Chicleros camp. Workers stay here during the week and go home to their wives and families on the weekends. Each day they go two to four kilometers into the jungle to tend and harvest the gum from the manilkara tree. The end product is chicle-- the rubbery substance that ancient Mayas used to use to clean their teeth--and originally the main ingredient in chewing gum. Synthetic materials are now used for most chewing gum, but the name still remains if you buy "Chiclets." The harvesting is similar to the sugar maple or the rubber tree. Below are a couple of shots of a tree and its chicle trickle.

Everyone was off to work when we visited so we had to make do with the resident cat named "Puma."  Had he not been so skittish we could have said that we petted a puma while in the jungle. 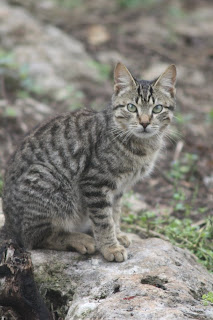 The resident milk producer was also around, but she was busy too. 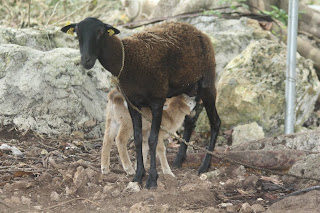 While in the camp the men live off the land and their animals.  Our guide said there were usually some chickens around but there had been bad hunting last week and the chickens had disappeared.  All the workers, he said,  carry guns to pick off game they may encounter  as well as any unwelcome strangers who might happen into their territory.  Hopefully that was a joke, but he wasn't laughing when he said it.


Rob also gave us a short lesson in jungle remedies and dangers.  He showed us some termite poop that grew inside hollows in trees that could be used to treat sores and cuts. 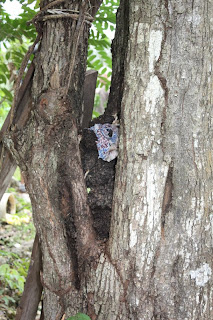 He pointed out some leaves that if crushed and eaten would mediate diabetes and then said that drug companies were not interested in these kinds of natural remedies because they could not be patented.  "The drug companies are not interested in your health" said Rob, "only your money."   He also pointed out a tree that if you came into contact with it would cause you to burn fiercely and also a tree not twenty-five yards away that he said would relieve the pain. Noone in our party volunteered to try it out.  Nor did he.

On the way back to the van we stopped to inspect a wild cotton bush that was all ready to harvest. 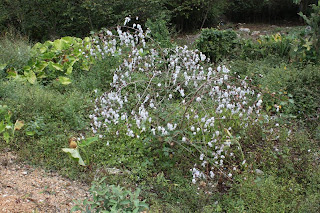 Then it was on to Leona Vicario, a small Mayan town which you will tour with us in the next chapter of  Stirring the Pudding.
Posted by DramaJim at 4:38 PM