The Very "Royal Resorts" of Cancun

For my final report on our trip to Mexico, we will deal with an unreal world I have chosen to call the Cancun Cocoon. There is a Mexican city called Cancun, which we visited on a bus trip to Wal Mart in order to stock up on provisions for the week. Then there is the Hotel Zone.  It is located on a long narrow barrier island. 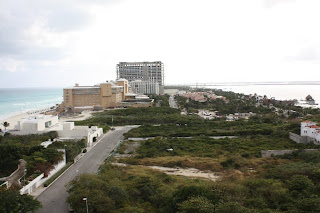 The fronts of the hotels, condos, and time shares—each one more resplendent than the next, face magnificent white sand beaches and the oh so blue Caribbean. 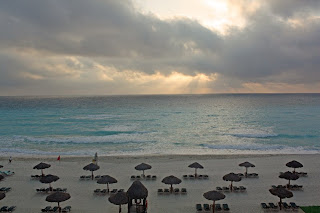 The back of the buildingss look out on a placid lagoon. Far in the distance on the other side of the lagoon (a world away in so many ways) is the real Mexican city of Cancun. 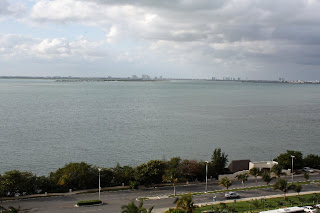 But back to the fabulous Royal Resorts. 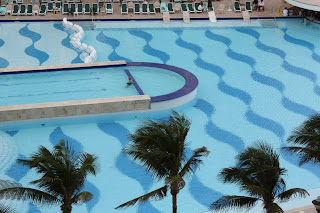 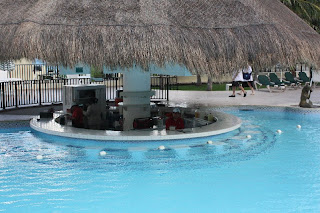 Each and every facility has its own complex of outdoor pools--some of them with swim up bars. Happy Hour may officially begin at 3, but in truth it is Happy Hour 24 hours a day if you are a guest in the Hotel Zone.

The Zone even has its own separate water  purification system. It may be one of the few places in all of Mexico where the tap water is perfectly safe to drink. We can vouch that we drank it all week in our villa and at various restaurants without Montezuma ever once paying a revenge call.  We were staying with friends at their time-share residence in the Royal Islander Resort.

﻿
﻿
﻿
﻿
﻿
﻿ We saw four other Royal Resort properties while visiting and one of the attractive benefits of staying in any one of them is that your access card and room key for one is valid for food, drink, or general purchases at any of the others. Three of the Royal Resort complexes are right next to each other and you can walk between them.

Our base resort was sleek, clean as a whistle, and posessed an impeccably trained and friendly staff with  good English language skills.  The front of house and concierge staff were especially fluent. Our villa had a small, well equipped kitchen, a nice living room with flat screen TV and DVD player, a spacious balcony overlooking the pools, and two bedrooms each with baths. One of the bedrooms is called a lock-off and has a separate outside entrance, lockable connection doors, refrigerator, and microwave so it can be used as a closed off unit if desired. Since we were were staying with friends the connection doors were kept open so we could access the living room and kitchen of the main part of the unit.  We could dine comfortably indoors 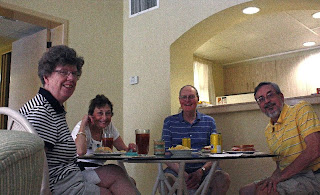 or on the pleasant balcony. 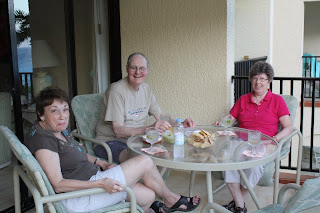 A short stroll north along covered walkways was the Royal Carribean Resort and a bit further along was the Royal Mayan. We visited the Mayan for a meal at their up-scale gourmet restaurant called The Conquistador. It was not cheap, but each course was beautifuly presented and delicious. My fresh shrimp were cooked at the table and a chateaubriand for two arrived to be carved before our eyes. 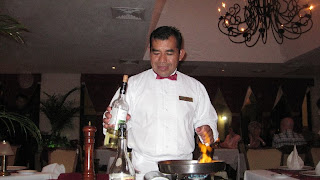 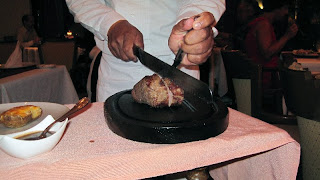 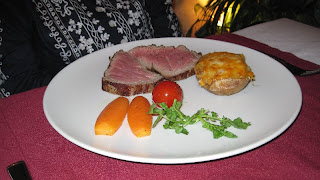 A live guitarist added to the pleasure of the evening.

At the Captain's Cove restaurant on another evening (just down the hill from The Royal Islander)  we were treated to a flaming after-dinner production of  four Mayan Coffees. 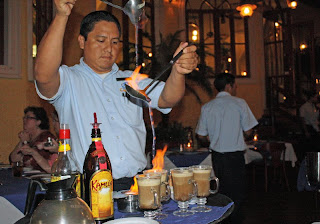 We took a hotel shuttle (free of charge) several miles south to sample the pleasures of one of the newer Royal properties, The Royal Haciendas. It is a massive complex with gigantic pools and a broad beach. We had a nice lunch on an ocean view terrace at their on-site buffet restaurant and lounged on the beach. 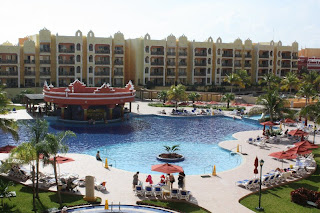 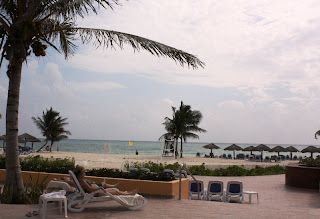 and then in the afternoon attended a mini cultural fair that featured a talented corps of Spanish Folk Dancers. 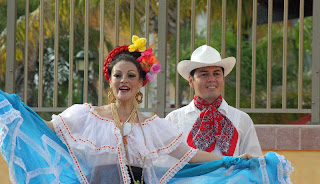 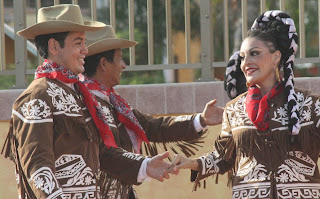 On our final day we took the hotel shuttle north to the Royal Sands Resort where we once again did a pleasant walk-around before strolling out the front door and along the main Hotel Zone road.  We visited one up scale shopping mall 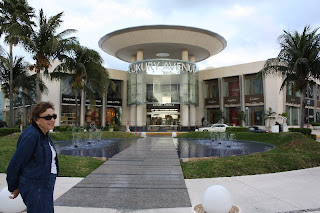 and then a giant more carnival like mall that had an eclectic mix of entertainment , food emporiums, souvenir peddlars, clothing outlets at all price levels, and even a major Aquarium. Our final destination, as the sun set over the lagoon, was a perfectly ambianced Thai Restaurant that had tables in little palapa structures set on piers out over the water. 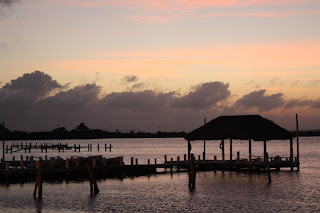 It was a most perfect way to end a most perfect stay. Our friends were the perfect hosts and we hope a return visit will be in the cards. We aren't water sport enthusiasts or bake on the beach folks, but the magnificent food and lush surroundings in tandem with easy access to exciting day journeys to sample the ancient Mayan historical heritage made our entire Cancun trip  a Royal Resort five star experience.

And with that, "Hasta la vista amigos." 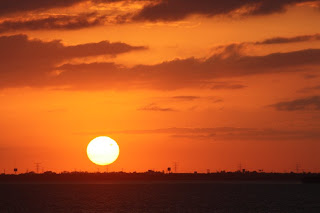