Berlin in 1963--With the Wall just two years old

Thirty years ago today the West celebrated the tearing down of the Berlin Wall.  The pictures on TV concentrated on images of wild celebration.  But some of you might be wondering what it was like to live in East Germany during the years of the Wall. In the summer of 1963 my wife and I took a train through East Germany and into the encircled enclave of  the city of Berlin. On the way through the East the train was locked down and no photos were allowed. Our passports were checked by coldly suspicious soldiers carrying machine guns. It was just two years after the wall was erected.  My photos have dimmed a bit over time, but they are good enough to make the point about a world that was and a world that could easily return if our society continues to tolerate approval or studied nonchalance when faced with open evidence of the stifling of dissent, corruption, racism, or  constant vituperation and  falsehoods.

Would you like to live here?  This is my favorite photo of the Berlin Wall  because it speaks visualy to the real nature of totolitarianism.  You are looking at the front of the Brandenburg Gate which was just inside the Eastern Zone.  It is in plain view and only a matter of a few paces from the Wall  yet unobtainable behind the barrier and the barbed wire. This photo shows the gate from the side with the wall and an admonitory sign. 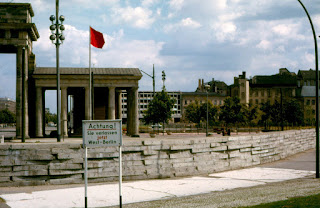 Here you can see a West German Street that was literally truncated at the wall,  which runs almost invisibly in the background. 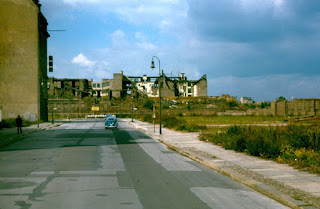 Officially, as citizens of one of the four-power ruling coalition that controlled the city of Berlin (USA, France, England, and Russia), we were allowed to enter the East Zone through the historic Checkpoint Charlie. Below are pictures of the vehicle entrance and the pedestrian entrance as it looked in 1963. 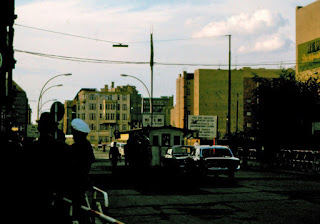 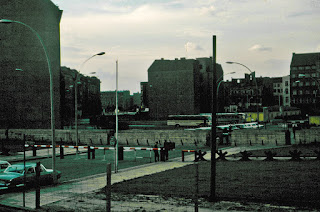 Once in the East you were struck by an obvious change in general environment.  Streets were broad but fairly empty of both vehicles and people. 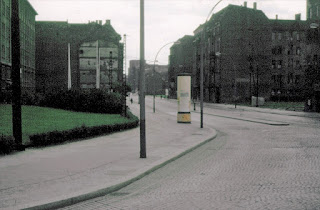 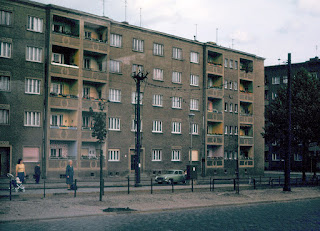 This building was nearer to the wall and the roof  edge, though hard to see from this old slide, was covered with barbed wire. 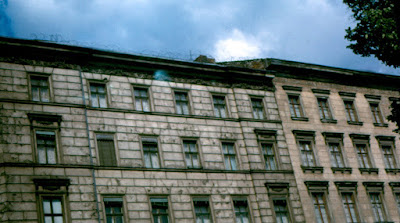 Below was an East German play area that ended at the wall just visible in the background. 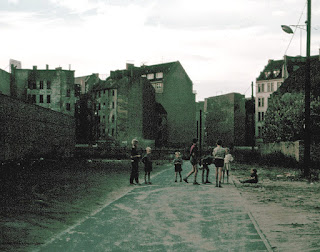 At first East German buildings abutted closely to the wall, but soon more of these structures were razed in order to form a so called dead zone through which escapees would have to traverse or tunnel under before they could reach the West. 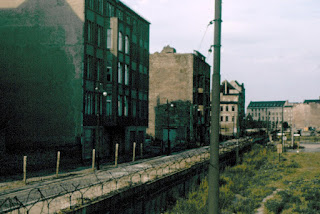 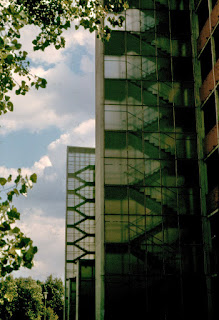 Back in the West the contrast was even more apparent. The streets and buildings were more open. modern, and inviting.  WWII damage and rebuilding was clearly moving more rapidly. 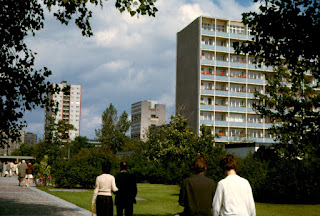 And that is my tribute to the tearing down of that Wall.