Our ship docked in Clarkston/Lewiston late in the evening of October 6th. Right after breakfast the following morning we had a program by a Nez Perce Indian named  J.R. Spencer. He was in full costume and carried a drum and native flute, which he played to accompany his recounting of some of his ancestor's ancient myths. 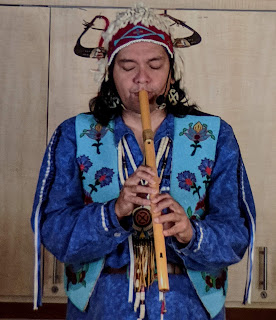 His talk also was sprinkled with humorous references to the modern day and his life both on and off the reservation. This kept his presentation upbeat and refreshing in spite of clear references to the long history of mistreatment of native peoples. 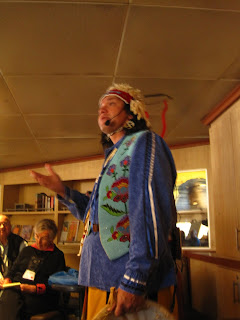 Shortly after his talk we trouped outside to the dock where two jet boats were moored to take us up the Snake River and into Hells Canyon. 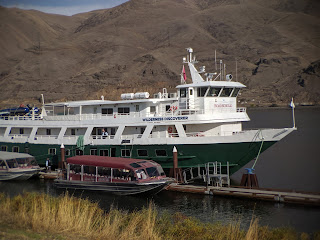 These boats are propelled by sucking in water at the front and then pumping it out the rear at high speed. At full throttle they can reach 30 miles an hour--though they are definitely noisy. They have an  advantage over a traditional speed boat as without a drive shaft and propeller below the bottom of the boat they can operate in shallower water  and rocky rapids.

So we settle into our seats. 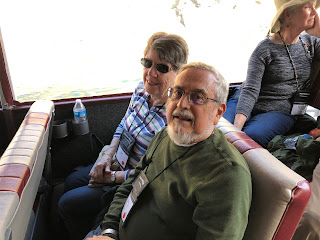 Our driver and guide is in place 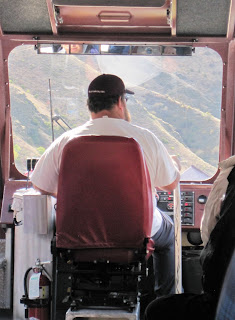 and away we go. 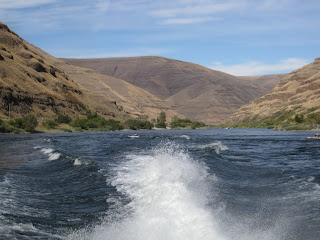 Unfortunately this little movie segment does not appear to work. Not sure at moment why not.


A coastal road shadows the  Snake river for the first miles out of Clarkston\Lewiston, 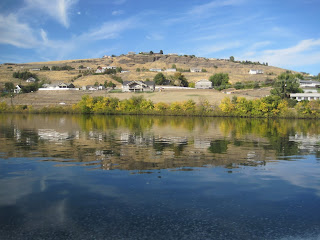 When the road ends the dwellings rapidly get fewer and further between.  Some are minimal camping shelters. 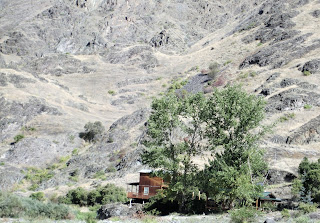 Others have clearly been constructed by members of the monied class.  They could afford to bring in builders and construction supplies by boat, raft, or even helicopter. These places usually have , picture windows, solar panels, satellite dishes, and well manicured shorelines. Our guide even mentioned one well heeled resident who carved himself out an airstrip, 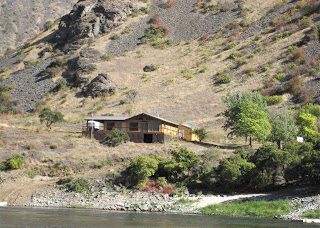 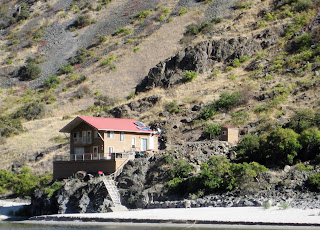 Around noon we stopped for lunch at a parcel of land owned and operated by the national environmental organization Nature Conservancy.  It is appropriately named Garden Creek. 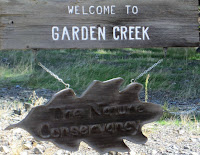 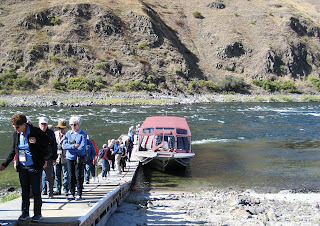 A caretaker family lives there year round. Some supplies come in by boat but they do exist largely on organic gardening. They tap a mountain stream for irrigation and grow delicious apples and pears in their orchard. 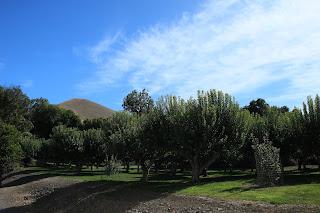 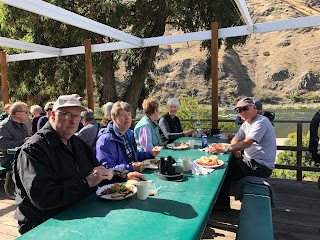 and feasted on a dessert of organic apples and pears pulled directly off the trees. 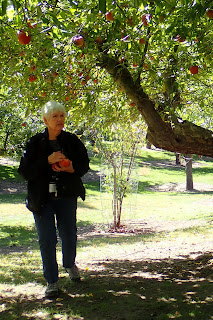 We also shared the grounds with some four footed visitors. 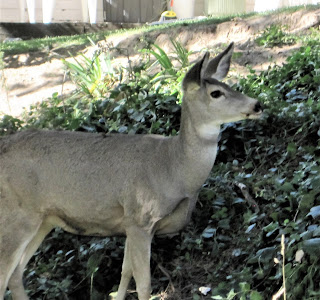 We re-boarded the jet boats after lunch and headed upriver a bit further into the canyon. 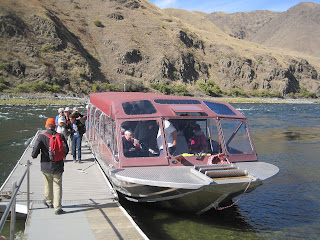 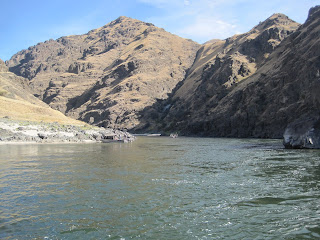 As we continued to motor smoothly up through quiet fishing spots and white water rapids, 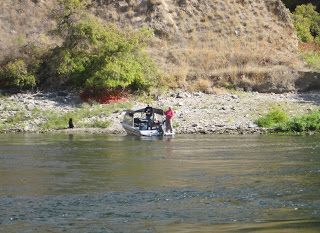 we could easily imagine how different it would have been for the Lewis and Clark party as they attempted to paddle and control their hand built dugout canoes on this river.  According to the journals the natives were unimpressed with the white men's construction skills. The further up the river we went the more isolated it became.  We were, however, reminded at one point that this river was a highway long before the Corps of Discovery set their canoes on it. The "ancient ones" had been there long before. 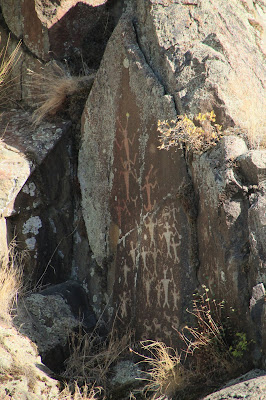 The canyon is home to other denizens as well.  Thanks to our tour photographer, who had a great long lens, we received some nice pictures of  Bighorn Sheep that were grazing on the mountain sides or getting a cool drink from the river. 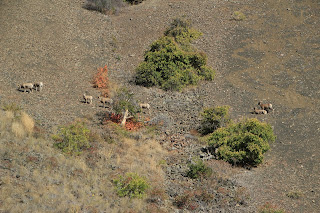 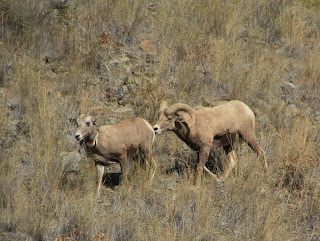 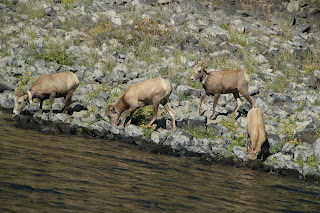 And always the scenery and the geology kept us enchanted. 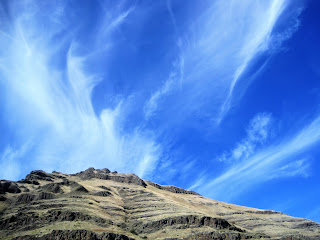 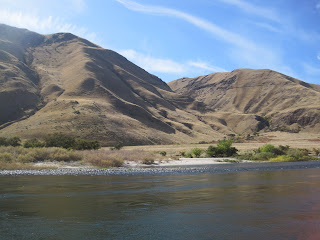 Our guide noted that this area was home to both gigantic volcanic eruptions as well as inundation by vast seas.  Thus you can see the evidence of major sedimentary deposits as well as volcanic extrusions of basalt in what is now exposed in vertical pipes. 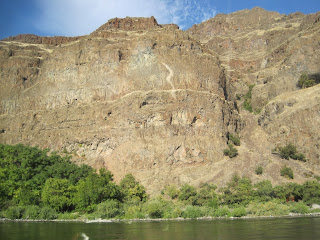 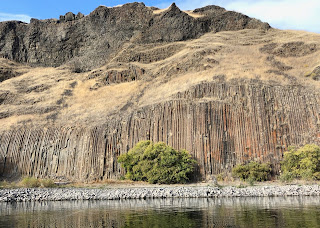 Often the views are pretty placid. 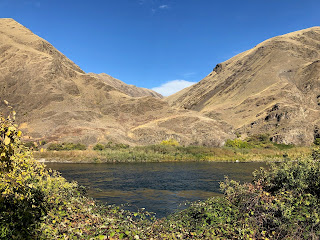 but this shot lets you know that the river does fluctuate--especially during the spring.

It's time to head back downriver now our dock in Clarkston/Lewiston. 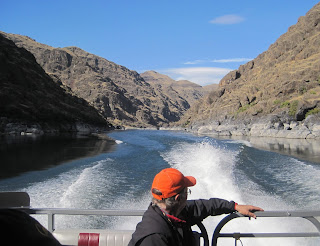