Chapter V The Maryhill Museum and Stonehenge on the Columbia

Chapter V  The Maryhill Museum  and Stonehenge  on the Columbia


We start this section with the incredible geology of the Wallua Gap.  The Columbia River basin has been the scene of a great deal of volcanic activity and has also  been flooded a number of times by ice jams and runoff from  Canadian glaciers.  These melts formed huge lakes which in time put massive pressures on the surrounding mountains. The "You are here" label on the map below shows where the pressure of the water broke through to flow down the Columbia toward the sea. We now call that spot the Wallua gap and it lies at the head of the Columbia Gorge. 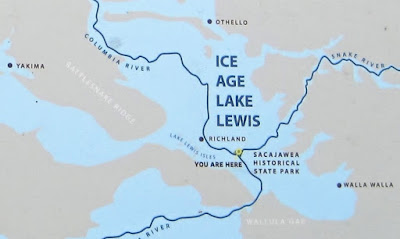 Here is the Wallua gap as it looks today. 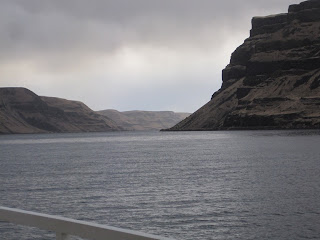 As you head into the gorge you can see how the flood waters wore away softer rocks to expose the harder volcanic basalt formations just like in Hells Canyon. 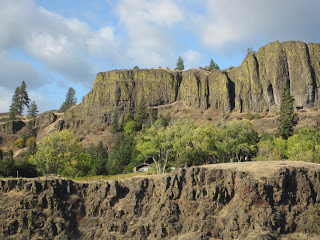 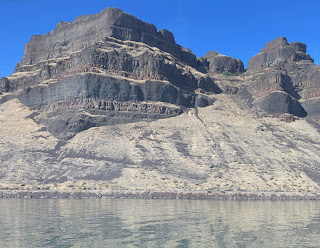 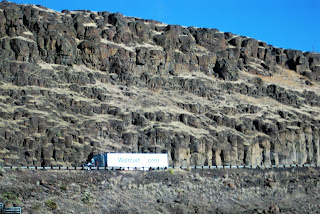 Sometimes the basalt towers will rise up to make intriguing natural formations like the so called Twin Sisters.  The ancient name comes from a ancient Native American legend about Coyote and his wives, but in recent times it has also been called the "Two Captains" in reference to Lewis and Clark who passed by it, but did not mention in in their journals. 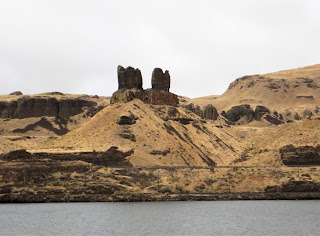 Basically this remains one of the most scenic parts of the river. 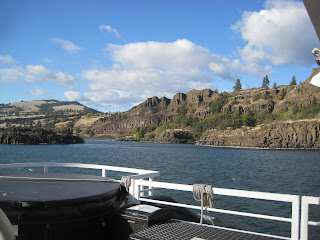 And  to top it off the morning of Oct. 9th dawned bright, cool, and so absolutely clear that we could see the massive super cone volcano that is Mount Hood lording above the environment like a powerful snow King. 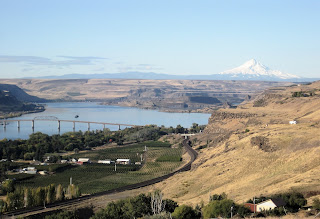 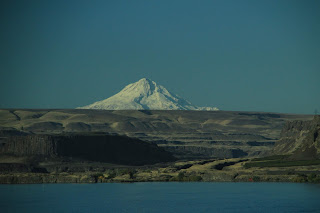 It might have been the possibility of this kind of a view that inspired a wealthy early 20th century road building scion and fervent Quaker to acquire several thousand acres of land on a bluff overlooking the Columbia river. His name was Samuel Hill and initially he wanted to start a farming collective. When that turned sour he turned his thoughts to building a mansion instead.  Along the way Hill married the daughter (named Mary) of the CEO of the Great Northern RR and the pair then had a daughter who they also named Mary.  And that is how Hill's mansion on a hill  was to be named Maryhill.  The construction process was not going well when Hill's friend, a famed modern dancer stage lighting guru by the name of Loie Fuller, convinced him that the building might better serve as an Art Gallery.

This note caught my eye since Ms Fuller spent some time as a child in my home town of Monmouth, IL  where her father was managing a local hotel.  She got her first tastes of performance before her family moved on to the Chicago suburbs and she moved on to become an international celebrity. Her  professional home  became Paris, France where she was a lead attraction at the Follies Bergere. She acquired a large base of friends in the art community including folks like Toulouse Lautrec and Auguste Rodin.  Using her close association with well-known artists in France,  Fuller helped build the core of the museum’s collection, including the acquisition of more than 80 works by French sculptor Auguste Rodin and a lot of her own memorabilia. Mr. Hill had also acquired his own art collection and especially some exceedingly fine examples of Native American material.

The museum was finally dedicated in 1926 by another Hill friend, Queen Marie of Romania who was the granddaughter of Britain's Queen Victoria. The opening ceremony received national attention and was attended by more than 2000 people.  Queen Marie also donated art to the museum's collection.  All told this is a space and a place that should not be missed. And I should mention that the view from the parking lot on the morning we visited was as good as it gets. 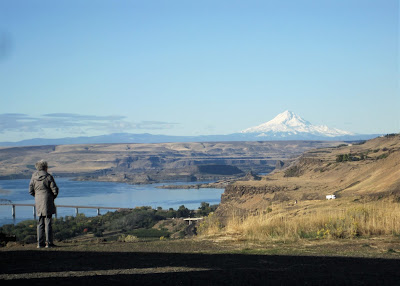 The approach to the museum is up a long walkway to the very crest of the hill. 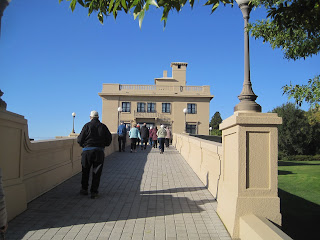 The circular structure in front of the main entrance is the ceiling of a large basement gallery that contains the Native American collection. 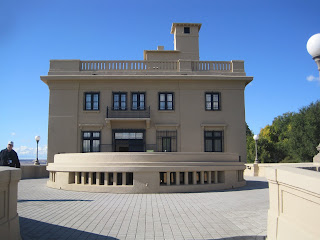 Inside there is beautiful pottery 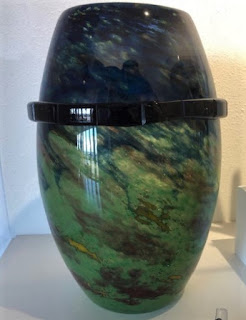 There is a smashing exhibit called Theatre de la Mode that is composed of miniature French fashion mannequins arranged in fanciful settings. 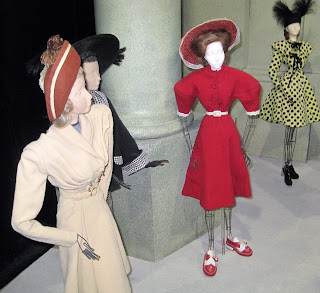 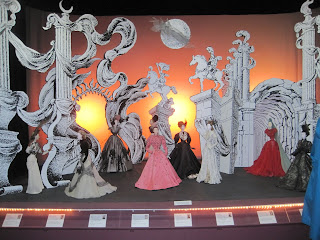 Then there is the Loie Fuller material.  We have paintings, posters, photos, and scads of letters and other memorabilia. 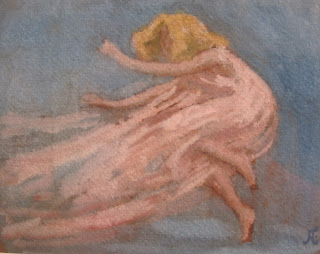 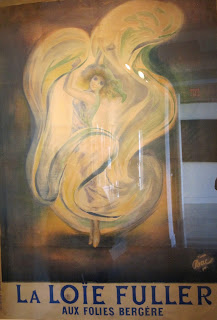 My favorite pieces in the whole gallery were these two drama masks that were made for a Paris theatre.  Loie  Fuller was the beautiful model. 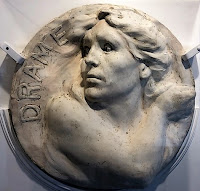 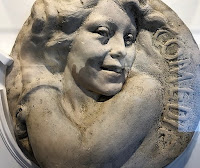 Here is an old photo of Ms. Fuller and Auguste Rodin relaxing on a Rome rooftop. The gallery has a large number of Rodin pieces. 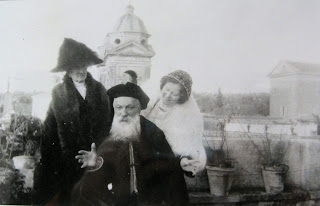 As noted before there is also a nice collection of Native American art from beadwork to baskets. 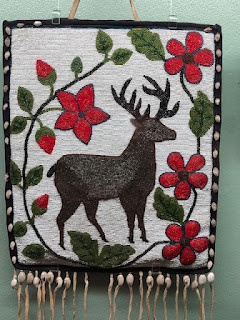 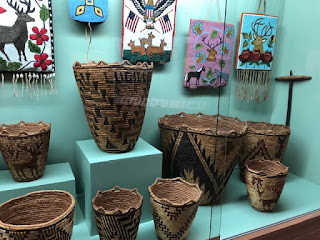 A lot of people have called Hill's house a "folly" in the wilds of the Washington, but the true "folly" must be accorded to Hill's giant sized replica of Stonehenge that is located on a nearby hill. It was intended as a memorial to WWI veterans and succeeds by virtue of its astonishing incongruity. 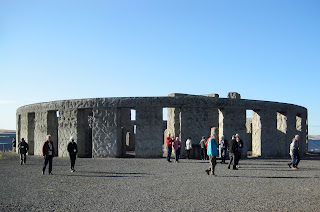 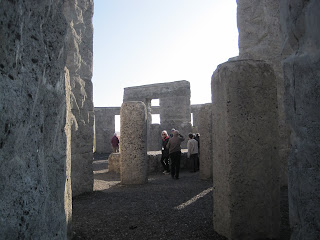 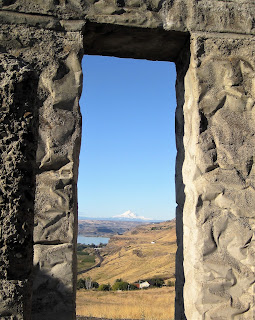 Ryan, our super guide, tells our photographer of a plan 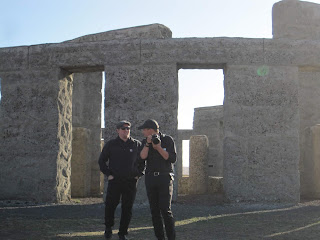 Then they get our entire group posed while admiring Stonehenge  while also capturing the fantastic background.    WOW! 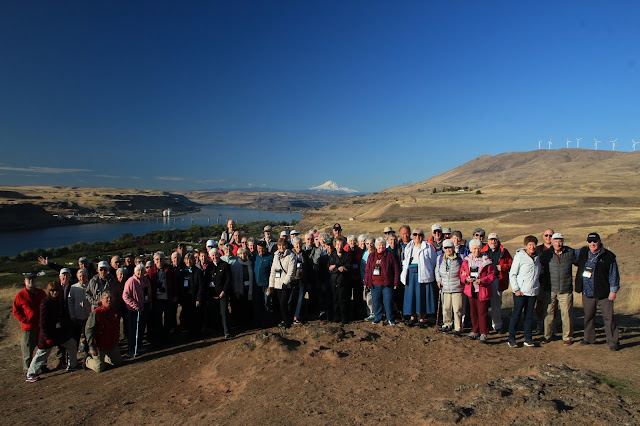 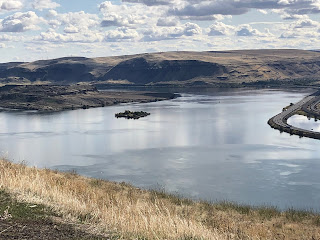 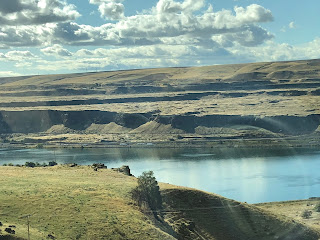 Next up will be a raptor show at the Discovery Center