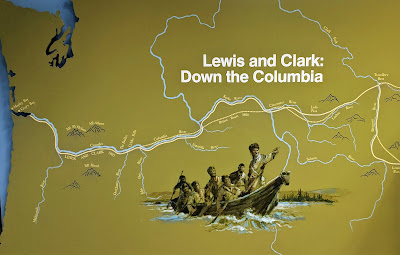 There are several dams on the Columbia and Snake Rivers.  They are all slightly different and most were built in the late 30's through the 50's.  Each has generally been built at the site of a natural narrowing of the channels and/or at significant rapids or falls. Those were the areas that created travel problems for Lewis and Clark and in later times made commercial navigation difficult. The dams and the locks constructed with them have turned these once free flowing waterways into a series of lakes that are now amenable to commercial navigation and recreation and they have enabled the creation of  massive amounts of hydroelectric power.  In spite of the best efforts of engineers to create fish ladders,  one of the worlds' best habitats for salmon and wildlife has been severely disrupted.  Today,  many of these dams are aging and need expensive repairs. Serious discussions have been launched about whether some or all of them should be destroyed so the river can run free again. We appreciated the calm waters for sailing created by the dams and going through the locks was fascinating, but while we were doing that we did hear on-board lectures on the problem. If you want to learn more about the pros and cons of the dams and the environment I direct you to an excellent article from October,2019  published by the Yale School of Forestry and Environmental Issues.      https://e360.yale.edu/features/on-the-northwests-snake-river-the-case-for-dam-removal-grows


Let's now take a peek at the Lower Snake River from the time it runs into the Columbia at Burbank, Washington. Here we are at Sacajawea State Park on the very spit of land where the Columbia goes to the left and the Snake goes to the right. 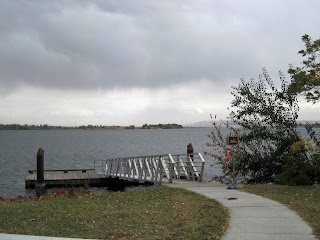 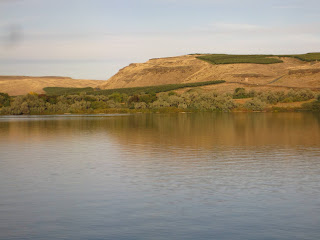 tends to level out to form  a flatter river bank. 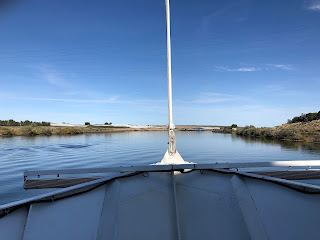 We saw some evidence of heavy industry storage 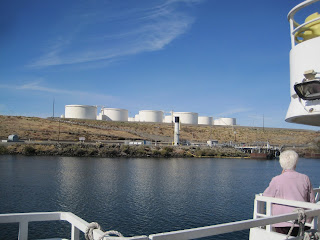 But mostly we saw larger irrigated  plots made possible by drawing water from the pools created by the dams. The major crops are fruit ranging  from apples to grapes.  A lot of the fields were near harvest and covered with cloth or netting to keep the birds from descending onto the ripe produce. 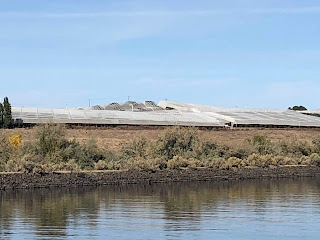 Ice Harbor Dam is the first dam and lock after the Snake veers away from the Columbia.  It is interesting because the lock has doors that raise up and down rather than doors that close. 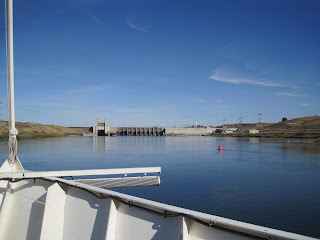 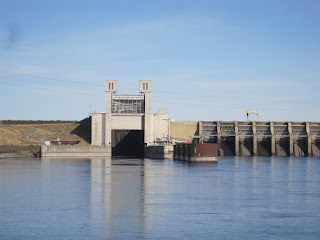 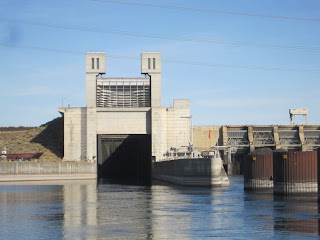 We are almost in the lock. 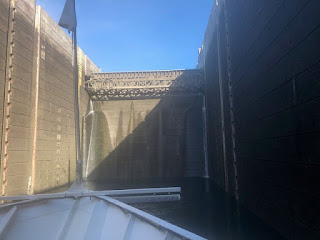 You can just see the water spilling down along the left side from the level of the river that we are going to end up on. 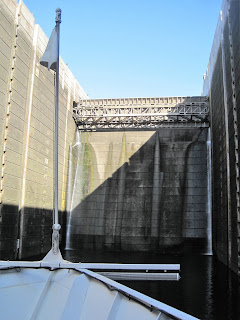 Fully in now the lock door will now descend so the chamber can be filled to raise us up to the next level. 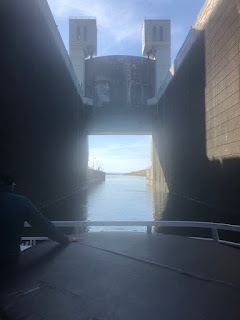 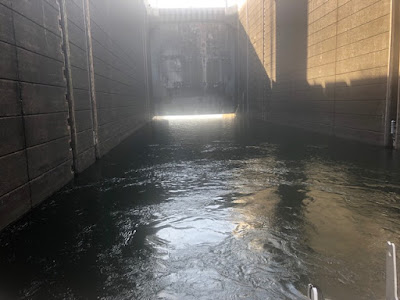 And about twenty minutes later the upriver door lowers and we 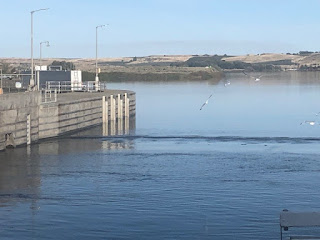 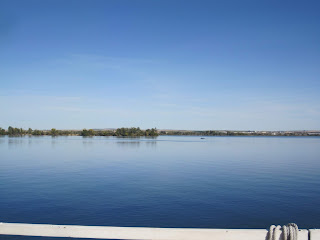 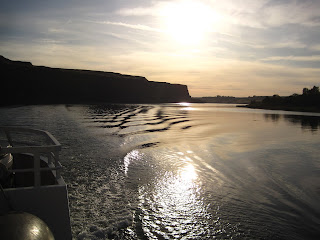